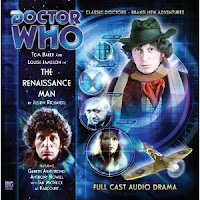 What’s it about: To continue Leela’s education, the Doctor promises to take her to the famous Morovanian Museum. But the TARDIS lands instead in a quiet English village, where they meet the enigmatic collector Harcourt and his family. When people start to die, reality doesn’t appear quite what it was. There’s something sinister going on within the walls of Harcourt’s manor, and the stakes are higher than they can imagine. The Doctor is about to discover that a little knowledge can be a dangerous thing…

Teeth and Curls: This is a world away from Tom Baker’s awkward performance in Destination Nerva, as he fiddles with the console and has some wonderfully funny lines to say he feels pretty much like the Doctor we had during the Graeme Williams era. Either I have mellowed a tad since my review of Nerva or Baker feels more comfortable with this script and because everything I say is (naturally) going show me in the better light I will say it is Justin Richard’s fruity dialogue that has encouraged a more fulsome, authentic performance from the man. The dynamics between him and Leela are more akin to that of The Sun Makers here with lots of witty interplay and quick responses. This just goes to show how this pairing could have been had Baker not had such a sour mood throughout season fifteen, they are actually very funny together (‘Come on Leela this way!’ ‘No we will be safer in the wood!’ ‘Come on Leela that way!’).

If you don’t know where you came from how can you possibly know when you’ve arrived? They encounter something that might look and sound like a dog but it might be the dominant lifeform. The Doctor teaches Leela to never judge by appearances. Modesty forbids but he is a man of learning, accomplishment and impeccable style. Odd can wait if someone is in trouble. For a moment it feels as though he is having his tooth pulled out through his ear! He can’t bear small print in a book but can usually get by if the pictures are very good! He even knows a hawk from a handsaw when the wind is in the right direction. He probably needs to reverse the polarity because that’s usually the way it works. For a second the Doctor shows his teeth and because of his joyful mood throughout it has much more of an impact – just like the ‘appreciate it?’ moment in The Pirate Planet. He’s the stranger that walks into town, puts everything right and moves on again – he’s either a Wild West hero or Michael Landon from Highway to Heaven! The Doctor tests Harcourt’s knowledge by asking a question about a made up village and testing the information he thinks he has extracted from his mind. Its lovely to see the fourth Doctor’s overactive imagination tearing down this world – the anarchy of fiction reigns supreme! 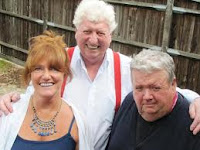 Noble Savage: Leela is supposed to be visiting the Morovanian Museum to continue her civilising education but instead gets terribly excited when she meets somebody who she thinks is a fellow huntress! She has many ways to kill a butterfly – catching it in a net and crushing it like a baby Horda or taking it on the wing with a Janis thorn fired from a blowpipe! The Doctor ties to suggest she has an incorrigible sense of humour! He’s still working on Leela’s style. She practically explodes like a can of Nitro Nine when she discovers there is an armoury on site filled with weapons – nothing could get her more excited than an arsenal! Leela only has to use a weapon once to be an expert and she handles a gun proficiently after using one to protect her friends Jago & Litefoot in The Talons of Weng-Chiang. What part of stay close to the Doctor doesn’t she understand? Leela’s knowledge of the hunt has deserted her, stolen by the Professor and she is crippled by the loss. Hilariously the Doctor tells Leela to let him have it and she charged forward like a wench from hell not realising that he meant to let him have her knife. She doesn’t understand why women do not fight during wartime because women make good warriors. Leela asks if no one can know everything then why is he bothering to teach her? He answers that just because you can’t know everything it doesn’t mean you should stop trying.

Standout Performance: Tom Baker is superb in this, the idiosyncratic tone matches his nutty personality and you can tell he is loving every second of this absurdly enjoyable script.

Sparkling Dialogue: ‘What a wonderful armchair! Lovely arms!’ – it seems that Justin Richards is far more in tune with the kind of irreverent eccentricity of Tom Baker than Nick Briggs was and has a way of writing dialogue that should be cringeworthy that Tom can weave his magic spell on and make sound gorgeous!
‘Cow parsley!’ – only Baker could make this sudden exclamation sound like a swear! Its exactly the same way I imagine Tom said 'whippet shit!' with regards to the scripts when he was the incumbent of the role on television!
‘How does it feel not being the cleverest man in the room?’ ‘I wouldn’t know! How does it feel?’
‘Hello! Beryl, isn’t it? You’re looking very yokel!’
‘Runny science again!’
‘What’s that Scruffy? And woof to the family!’ – the very idea of the Doctor getting a phone call from a dog he conversed with makes me howl with laughter!
‘I’m grounded until my crates put back together again, what’ ‘What?’ ‘What?’ ‘No you said what!’ ‘Oh righteo, I was just saying, what’ ‘What?’

Great Ideas: The Archimandrite of Fastidious Nine! Hah! I would love to meet him! The Doctor and Leela land in a quiet English village which gives the opening scenes a lovely flavour of The Android Invasion and Image of the Fendhal. Doors, paintings and cow parsley appearing from nowhere…what is going on? The Professor can assimilate the knowledge of people – the Renaissance Man is knowledge incarnate, knowing everything that is possible to know at the time. It’s a birth of a new era of learning, assimilating knowledge from the best experts and taking it all. Only the Doctor could be arresting for killing a man who is still alive by the policeman that then shoots him in front of him! They have a book that contains the names and feats of every person that made a contribution to history for the professor to absorb. They absorb most of the knowledge using an osmotic process, recreating a specific era and absorb all the relevant data. It’s to preserve knowledge, think how much knowledge dies when an expert dies. If all that knowledge can be bestowed on one man than it need never be lost. Harcourt has created a glorified encyclopaedia masquerading as a theme park. In a great Poirot reveal the Doctor pulls the wool from Harcourt’s eyes and informs him that he is the library of information, reading to answer whenever the real Renaissance Man wants him to. The butterfly effect of erroneous information ripples out and starts to tear this virtual world apart; the Doctor has introduced fiction into a world of fact. An empty space as a metaphor for the huge task of learning? The last scene is a peach!

Audio Landscape: Horse whinnying, clip clopping on cobbles, I love the TARDIS sound landing because it literally sounds like somebody has picked up the ship and tossed it somewhere in time and space and it has landed with a bang, birdsong, a dog barking, a whipping net, ticking grandfather clock, police car arriving, doorbell ringing, snapping twigs, spitfires roaring overhead, bullets whizzing through the air, a siren, dreadful chirpy music in the lift as it grinds upwards to the 12th floor, a wonderful Leela bitch fight on a shiny floor, crickets humming, Beryl’s fractured speech.

Musical Cues: How odd that the 4th Doctor music is now the theme that feels out of place when that was the one that kick started everybody’s adventures with Big Finish. I’m so used to the mad synth guitar of Davison, the disquietingly calm Trial version and the spangly McCoy themes that this – probably the best of all of them bar the original is taking a little getting used to! More Dudley Simpson-esque music from the current champion of Big Finish music, Jamie Robertson. What’s especially impressive is that he has managed to toss his own unique style out of the window (his scores usually approach something blissfully cinematic) in order to emulate the era these stories are supposed to be set in. The quirky dramatic stings take me back to the best of Simpson. Bravo that man. The music goes nutty in the second episode as we tip into a western (the xylophone comes out), experience dreadful muzak and exciting melodrama as the world is torn down.

Standout Scene: There’s an astonishing moment when Tom Baker drops all the frivolity and removes the mask of one of the characters in the twisted reality to prove to them that they aren’t real. Its only because it is surrounded by such madness that a scene of such chilling seriousness can work so well.

Result: A funny, colourful adventure with delightful characters and dialogue, The Renaissance Man would have made a far superior opening adventure for the Fourth Doctor Range. There is such a gulf between my reaction to Tom Baker in this and Nerva because here he made me laugh my head from his first scene to his last and rather than stumbling through an awkward plot he seems to be having the time of his life and its infectious! Coupled with the fabulous Louise Jameson who shows a real flair for comedy and you have a marvellously humorous double act fronting this story. The setting allows for a very domestic audio landscape that was very easy on the ear and Jamie Robertson’s Simpsonesque music continues to shine. Justin Richards is a fine writer who so rarely lets me down, after all these years of telling Doctor Who stories he also seems to come up with something fresh and exciting. Some of the ideas are plundered from his other stories (I detected some concepts from his novels Option Lock and The Clockwise Men) but the tone of the piece is vastly different. Energetic and enjoyable, this isn’t Big Finish at its absolute best but its still a hell of a ride: 8/10
Posted by Doc Oho at 00:34

I still think you were too harsh on Destination Nerva, but you are right that his performance here is much more engaging, and I think it's down to the strength of the material. The setting is so bucolic, too. It is the mind of thing that could easily have been made for TV without having to travel far from the studio, which isn't to say that the audio setting sells it short. A very solid outing.

Wow, thank you for this. Your review really helped me to fully understand the story. I was struggling with the audio alone since I'm not a native speaker. Cheers!

This episode makes me glad I didn't give up on the series. The image of Leela saving the Doctor with Wild West gears made me grinned like an idiot.

The troublesome Season 15 is actually one of my favourite. Too bad Tom Baker's health started degrading at that time, the production ran into problems, not to mention the writers was wondering why Leela wasn't fully seen as strong progressive female character that they intended to be (yeah, skimpy leather dress in 1970s, seriously mate..).