Absence written by Daniel O’Mahony and directed by John Ainsworth 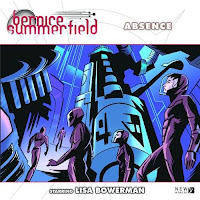 What’s it about: Cluster worlds are one of the great mysteries of space travel – planet sized objects that have spontaneously fused together from the detritus, junk and flotsam left behind by both human and alien space travelers. The archaeologist that solves the mystery will become rich and famous overnight. Professor Bernice Summerfield just wants to leave. Bernice and her son Peter are stranded on Absence, a cluster world that has been settled by a cartel operating beyond human space. Its an artificial world where everything is at a premium and nothing comes without a price. For the wealthy few who can afford it there is the relative freedom of the world beyond the sterile cartel domes, but Bernice is almost penniless. The reclusive entrepreneur Lamarque Aslanides is leading a mission to explore the largely uncharted interior of Absence. For Bernice it will mean a long and painful separation from her son but the money will pay for their passage off this world. As the expedition descends into madness and death , they discover that they are not the only ones interested in the mysteries at the heart of the cluster. Then when Peter’s life is placed in danger, Bernice is unable to help…

Archaeological Adventuress: Absence is Bernice’s stop between the Pervestan system (Glory Days) and Venus (The Venus Mantrap) where Jason’s fortune is amassed but she is stuck here with ever dwindling funds. She doesn’t have enough money to buy headache pills or even the water to swill them down with! Peter is bored and restless and getting on her nerves. She’ll take any job to raise the funds to escape this stinking hole. Its possibly the lowest ebb we have ever seen Bernice at and things are only going to get worse. Its quite upsetting to see Bernice so depressed and to have her ego crushed even further (and publicly humiliated) when she makes a fuss about only one Summerfield being allocated to the expedition and assuming that it is her. Bernice is described as a troublemaker and a dilettante and can be seen flipping burgers to make a living. Bernice’s maternal instincts are stronger than ever in this story and she threatens Cindy that if anything happens to Peter she will never, ever sleep again. She has never had to willingly let him walk into danger for her before, its something she has always been willing to do for him. That’s easy enough because she loves him but now the positions are reversed it is an agonising experience for her for precisely the same reason. From Bernice’s experience fun expeditions turn out to be anything but and she would much rather it was a dull one for Peter. Bernice admits it has been too long since she was last drunk or high – being a parent has stripped her of such pleasures. When she manages to get through to Peter it is at a moment of extreme  peril where all her fears for his safety are confirmed. The threats that she spits out to Aslanides are so harsh and bitter you might just find yourself reeling at the power of them.

Angry Adolescent: Between The Adolescence of Time and Absence Lawrence Miles and Daniel O’Mahony have more the justified the continuing exploration of Peter Summerfield. Its been a fascinating journey from his dramatic birth in The Glass Prison (still one of the best ever Who related novels you will read – check it out) through the sitcom tug of war between his parents (Bernice, Adrian and Jason) and his savage adolescence in stories like The Grel Escape and The End of the World which exposed how dangerous he could be. Since Eddie Robson took control of the range there has been a concerted effort made to concentrate solely on the relationship between Bernice and Peter and it has been everything from estranged (you could be forgiven for thinking that he is hindrance in her life at times) to heartfelt. This is the reason why this range has been able to survive so long because it has always fleshed out its regulars so well and found fascinating new ways to explore the character of Bernice Summerfield through others. To be handed scripts like Adolescence and Absence are a gift to Peter and he shines like never before in the hands of these experienced writers.

Peter is becoming ever more independent and is unhappy simply following his mother around from place to place as she falls into a depressing slumber. When he makes the team and she doesn’t he insists that he wants to go because he knows how badly they need the money, even if his mother doesn’t want him to. More than that, he wants to prove himself to her. There are the first stirrings of a crush when he chats to Cindy and you almost want to jump in and tell him that he is involved in a drama and no good can come of such naive feelings. The first deaths of the expedition shock Peter because he was so calm afterwards and it is only when he has time to think about it that it shakes him up. When they return to the surface Aslanides is considering offering Peter a scholarship because of how well has handled himself.

Standout Performance: Absence is a massive ask of Thomas Grant and he gives a superb performance – his best yet as the ever evolving Peter Summerfield. He has to narrate great chunks of the action and express Peter’s horror at the same time and he makes the process appear effortless. The range has been a success primarily thanks to the gifted actress Lisa Bowerman who has never shied away from showing fresh facets of this wonderful character and I mean it as a massive compliment that she has never been better than she is here. Its difficult to make such depressing material come alive so vividly but Bowerman is more than up to the task and come the scene where Benny is screaming blue murder at Aslanides I was astonished at the raw emotion she had injected into this story. It often saddens me to think that some people wont ever give this range a go because they are missing out on some of the best drama Big Finish has to offer. And some of the best acting.

Sparkling Dialogue: ‘Peter will be gone now. Under the skin, into the marrow of Absence…’

Great Ideas: Absence is one of the most fascinating worlds you will ever stumble across in Doctor Who or any of its spin off media. It’s an absorbing Russian Doll location that keeps unpeeling new layers as the story progresses with a lawless, gypsy town exterior and chilling, mysterious interior that is slowly and painstakingly explored. It doesn’t quite look as though it was grown and it doesn’t quite look like it was built, its part artefact and part organic. A cluster of human and alien matter fusing into one great mass and turned into a habitable area – it means this world is literally constructed of unknowable components from races we can barely comprehend. Its probably the most idiosyncratic planetoid Bernice has ever set foot on and it comes as a massive shock when she isn’t invited to explore its depths in favour of her son. The spacesuit that Peter has to wear to explore the depths is almost like a symbiont, it feeds off him as he feeds of it. If you die it begins to break down your body until there is nothing left, not even dust. As they sink beneath the surface the gravity gets thinner so it feels disorientating like you are ascending to heaven. Peter is given the excuse that it is possible that there are possibly survivors or colonies beneath the surface to explain away the presence of crates of arms in their mission equipment. The mystery of what Aslanides is looking for beneath the surface grows deeper as a race of robots attacks the group and the expedition turns into all out warfare. Two ships slip into orbit around Absence and the cartel security systems do not detect them – not Imperial Earth ships to expose the planetoids weaknesses and take over the free zone but Keep’s people, the TechnoCult on a rescue mission to save their people.  The TechnoCult virus infects all the technology it comes into contact with and turns them into wild machines bent on destroying the human race. Every world they have infected has fallen to them. Machines that think like a man. The TechnoCult need to stop Aslanides from killing Absence itself. An EMP fires and corrupts the ships which crashes into the surface killing 20,000 giga-souls. Absence lives up to its name because at the core of the planet is technological life, lots of machines coming together and evolving into something new. Cindy used her face to seal Peter’s visor and keep him alive because she made a promise to his mother. She is a sentient, prototype suit built by ISA. She broke Aslanides’ neck to spare him from the truth – ISA doesn’t belong to him anymore and he got to die happy in his own little fantasy that it did.

Standout Scene: In an unforgettable scene Bernice wonders if the human race should never have set foot into space. You might feel like breaking down and crying to hear her trapped in such despair and yet there is something hypnotic and poetic about the thoughts that bleed from her depression. The music is especially strong in this scene, dragging the listener down into her mesmeric anguish.  ‘The human race has done great things since it left the Earth. Its created marvels’ ‘And monsters…’

Result: The Bernice Summerfield range has not felt this disquieting and haunting since Just War way back in series one and Daniel O’Mahony’s intelligent script it is every bit as gripping. Chunks of the story are told from the diary extracts of Bernice and Peter and how they are coping being separated; her agonising over the danger Peter is in and him desperate to be able to see his mother again. Maybe its because they are trapped inside spacesuits that force you to listen to dying screams of your comrades or maybe it is because the layers of Absence are so unknowable that you feel as though you are scrabbling about in the dark but the scenes below ground have a stifling, claustrophobic atmosphere that trap you down there with Peter and each death feels like a personal loss. Absence itself is a spellbinding setting which holds a mystery in its centre to be unearthed and I liked the fact that we didn’t quite get all the answers so it remains as enigmatic when we leave. The Bernice Summerfield range continues to sport some of the most intelligent writing and devastating performances (both Lisa Bowerman and Thomas Grant deliver their some of their best work as they are driven apart) and it breaks my heart to think of how many people are missing out simply because it isn’t Doctor Who. I hope we never have to experience Bernice in such pain again but as a chilling one-off Absence is unforgettable: 9/10
Posted by Doc Oho at 09:05