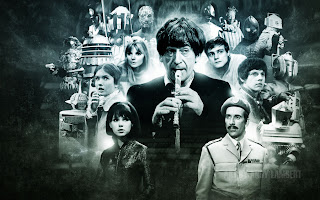 I notice you placed The Five Doctors after The Two Doctors and Helicon Prime.

World Game carries on directly from the end of The War Games. We also know that the Second Doctor in Players takes place during World Game.

After Serena dies, the TARDIS dematerialises. The next thing the Doctor is with the CIA. he is described as being older and grey-haired(as he is in The Two Doctors). And this sequence leads directly into The Two Doctors.

However, it is also explicitly stated that the Doctor(with a working TARDIS) spent some time travelling on his own. he is even surprised that the CIA let him do this, but they say they knew he would return to them.

IT is thus in this gap between Chapter Thirty-Six and Chapter Thirty-Seven of World Game that the Second Doctor appears in The Five Doctors. ore than the hair issue, it's also stupid to think that the Time Lords would then do the exact same things twice. This also explains why the Doctor demands he get to travel with Jamie...he's recently seen the "ghost" Jamie. And when Borusa attempts to scoop the Doctor in TFD, it makes sense that he thought it was the CIA.

Lastly, the Second Doctor happily walks around on Gallifrey in TFD. This makes no sense if he's ALREADY working for the CIA. It must be before The Two Doctors.