Dark Eyes III: The Death of Hope written by Matt Fitton and directed by Ken Bentley 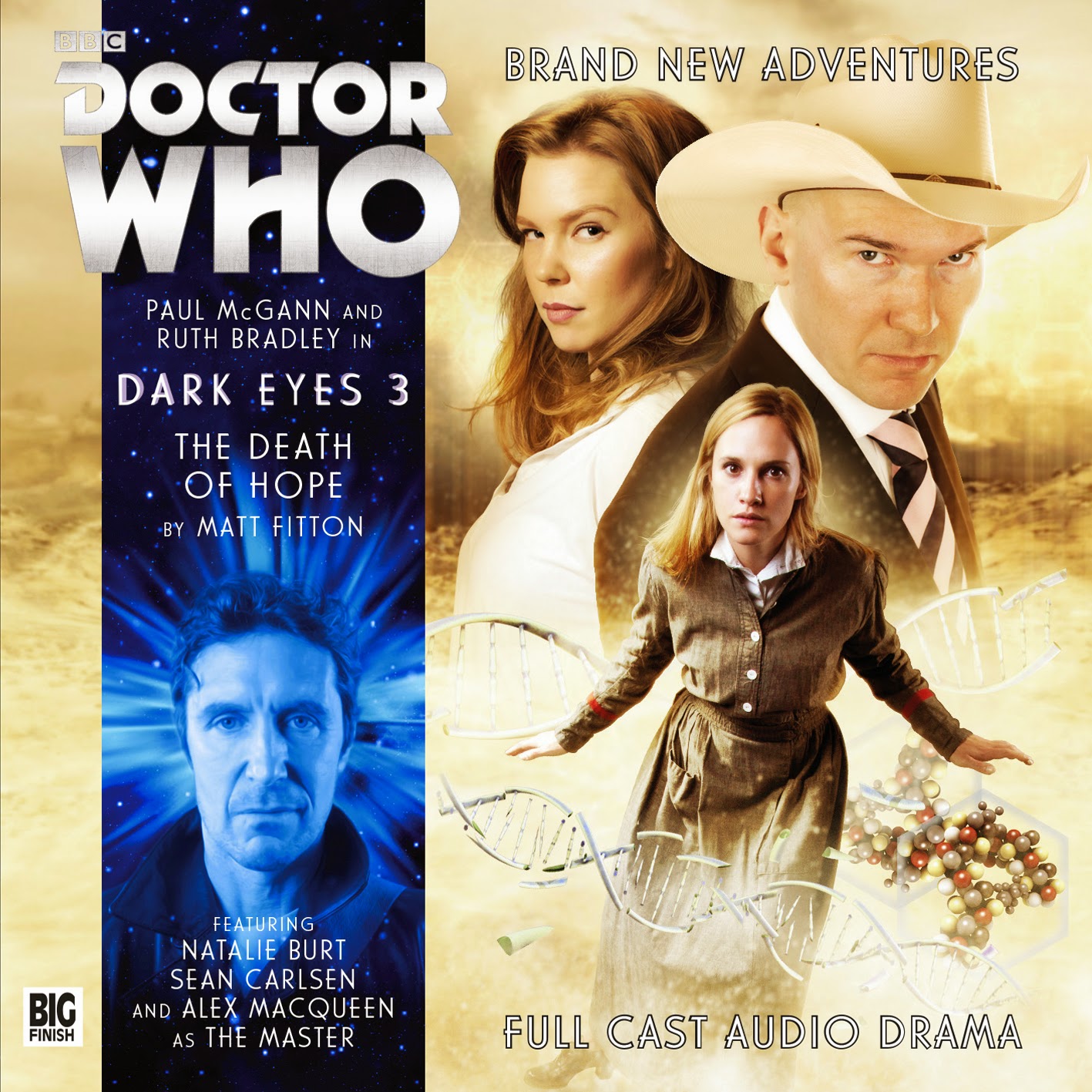 Damaged Goods: It's always quite unnerving to listen to the eighth Doctor interacting with the Time Lords with the foreknowledge of where both he and they are heading. At some point between Dark Eyes and Night of the Doctor the Time War will erupt and force the eighth Doctor to abandon his skin and transform into a warrior. That means some serious shit is going to go down. The fact that we are privy to this knowledge but the Doctor and the Time Lords aren't adds an edgy layer to events of the sort that I haven't felt in any other Big Finish series. His TARDIS has been ripped from the Time Vortex and impounded and he has been imprisoned by his own people. What he has been shown of the Master's activities brings out an anger in him that we haven't seen since the beginning of this Dark Eyes saga. His greatest enemy is abusing people he loves without them even knowing about it and amassing an army of his own. To prevent that from happening is his only desire now. The trouble is who does he save first...Molly, Sally or the colonists? Fitton has set up a lot of work for the war beaten Time Lord. Have we ever had the Doctor hang around this long and deal with the consequences of his previous adventures? It feels like he is settled in this time zone for some time, mopping up his mess.

Alter Ego: Unusually this opening instalment gives all the fun to the Master (don't the villains always have more fun?) as we observe one of his adventures along with the Doctor. I can't help but wonder if Big Finish were so seduced by the McQueen version of the Master (and naturally so, he's a delight) that they were tempted to give him his own spin off series (their all the rage these days). This seems like a fair compromise, for the Master to have a huge presence in the Dark Eyes series and for us to be able to observe him at work through the Doctor's eyes. This is quite a new take on the character because we rarely get to see the Master putting all the pieces of his plan into place, we usually catch up with him once his traps have been set and the Doctor has walked in to them. Now is a chance to see what happens to the Master between the Doctor's adventures, what he gets up after his last defeat and before his next (I hate to sound pessimistic but it's his lot in life). I love the idea of him walking into a tow under threat in a white hat and declaring himself a knight errand who has come to save them all. Such egotism. Is this the only time where the Master walks free of an adventure having achieved everything that he wanted? Horrifically, I could get used to this.

Dark Eyes: A prisoner of the Master, it has not yet been revealed what Molly's role is to be. Her Nan sounds like a lot of fun, a palm reader that her mother disapproved of. Given the reaction against her character has been that she is too acerbic, it's great to see a little of her wartime bedside manner at work. In her heart all she wants to do is help to heal the sick.

Standout Performance: You can tell when McGann is engaged by the material that he is playing, there is a certain frisson in his voice. It was there in Storm Warning when he first started out Big Finish and again when he first struck out in 45 minute stories with Lucie Miller and once again when Dark Eyes kicked off. When each of these formats has become the norm (the Divergent Universe, some of series two of the 8DAs and now at the beginning of Dark Eyes 3) McGann coasts a little, sounding a bit disinterested. The lines are delivered but there isn't any great passion in them. Mind you given he is merely an observer to events rather than the protagonist in this story could explain his ambivalence. Let's see how this develops throughout the box set. 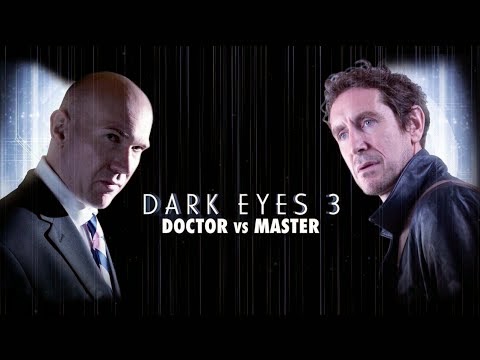 Sparkling Dialogue: 'Since when did Doctor translate into 'gun for hire.'
'Oh get back in your box...' - not a great line in itself but the delivery is wonderful. It's about time that somebody give the two finger salute to the Eminence.

Great Ideas: To give new listeners a chance to jump on board with this release without having to purchase and listen to over four hours of material to reach this point there is a summary of the events of the first two Dark Eyes set. Given it has almost been a year since the last instalment was released it is probably no bad thing that the experienced listeners are given a reminder too. I remembered all the elements (the Master, the Eminence, Liv, Molly, the Daleks, etc) but I couldn't quite recall how they were all linked. There is a war on between humanity and the Eminence and it is one the Doctor feels the Time Lords should have no part in. Is this one step closer to the Time War? There's talk of scrapping the fifty year war between humanity and the Infinite Warriors but playing about with the web of time is a messy business. An innocent woman was stolen from Earth's history - Molly O'Brien - and was turned into a weapon against the Daleks. When that didn't go to plan the Time Lords sent the Master of all people in to clear things up using the Eminence. In the original timeline the IDES scientific Institute was a research body established in the 1970s and little more than an academic institution that faded away in the 25th Century. In this new version of history, post Straxus, it is at the forefront of exploration, space travel, colonisation and technology. The Infinite warriors are the perfect fighters in war because they are merely empty vessels used to ship around the breath of life...they don't feel pain. Because these people have been touched by Molly and have been infected with the Dark Eyes virus, they are now immune to the Eminence. Anyone that the Eminence possesses that are primed with the Dark Eyes antigens will fall under his control instead. The crafty bugger. It was obvious that he was never there on philanthropic terms but to walk into a town of desperate people to recruit a new army of slaves for his cause...that's callous. With the Eminence infecting people with the breath of forever and the Master dosing them with retro genitor particles nobody in this war is fighting because they want to. It's a war of possessed soldiers.

Isn't it Odd: Very much the first chapter of this set, I'm not sure that The Death of Hope holds up well as a story in its own right but it certainly gets the audience up to speed and offers some intriguing hints for the future in its economic running time. I can make allowances for a story that has a weighty list of requirements like this but the next instalment needs a stronger focus on its distinctive narrative now all the preparation has been performed.

Standout Scene: The double meaning of the title really hits home in the last five minutes. The Master, happy with the results of his experiment, leaves the people of this colony to their fate. Or does he...?

Result: Part One of The Master Adventures. No wonder Paul McGann can't quite keep the irritation out of his voice. It's a clever, backdoor way of showing what a Master series might be like and with Alex McQueen playing the leading role it looks like it would be a delight to listen to. Regardless of the fact that they are in a set and all written by the same person I will be reviewing these pieces independently as they all have their own titles. The Death of Hope is all set up and prompts about the events of the first two series with hints of what is to come. As a story it certainly has more meat on its bones than The Traitor, which opened the previous set, mostly because of the Master's involvement and how Fitton waits until the last possible moment to reveal his true plan, stringing out the tension. There's not a great deal to discuss because so much of the impact of this story will depend on how it is followed up. Heron's world is nicely sketched in, it's populace represented by a handful of nicely drawn characters but I can't say I was overly concerned about their fate. Had this been a world that I was intimately acquainted with it might have made more of a difference. It's the Master that rises out of this story triumphant. He has achieved his aim but we still don't know how he plans to apply his newfound ability. I can't wait to find out: 7/10
Posted by Doc Oho at 02:50

I'm a big fan of your page and I love your reviews, I like how you make a detailed analysis of every Doctor Who story (I know you are reviewing other stuff but I come here for DW)

As always, you are spot on on your impressions. I was disappointed with the boredom I detected in Paul McGann's voice. He's really a good actor but when he's bored he just sound pissed off, irritated. I'm now looking forward to the end of Dark Eyes series and see in what new direction they take the 8th Doctor.

I was torn between 2 fav Doctors on audio (on TV are Troughton, Colin Baker and Matt Smith): the Sixth and the Eight, but lately my heart is pointing more and more into ol' Sixie's direction, specially after releases so good as the widow's assassin and masters of earth. Colin Baker never sounds bored, he always gives it all. I can understand why he's your all time favourite, he's simply a delight to listen

BlueHost is the best web-hosting provider with plans for any hosting needs.