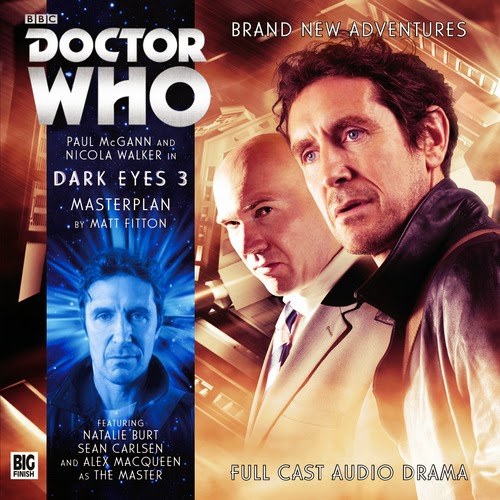 Damaged Goods: 'If I'm going to die on an exploding spaceship frankly I can't think of anybody I would rather take with me...' Masterplan opens with a gripping five minute sequence where the Doctor tries to convince Professor Schriver that the Institute that he sets up (IDES) would go on to cause chaos and destruction in the galaxy. The Doctor tries to make the attack personal, like everything the Institute caused in the perverted timeline would be directly his fault. It reminded me of how he tried to play God in A Christmas Carol but it doesn't irritate me quite as much. In the Christmas special the Doctor was re-writing time to save a handful of people, something that he has always said is expressly forbidden. It made me question why he had let other people in the past die, if he was so invested in keeping these particular people alive. Whereas the eighth Doctor of Dark Eyes is already fairly damaged after the loss of some good friends (Lucie, Tamsin, Alex) and his adventures have taken a downward spiral of being incapable of saving a soul from the machinations of the Eminence, the Master and the terrible humanity/Eminence war. I don't condone what he is doing, but since the timeline has been corrupted anyway...isn't it acceptable that he might try and alter things back to how they should be or stopping them from ever happening in the first place? Who knows, he could be bringing an even more corrupted timeline into existence. This is the Doctor at his most eloquent, trying to persuade the professor of his good intentions...and at his most desperate given the lengths he is going to. If it comes to a choice between heading backwards in time and re-stirring the pot or allowing the Eminence to terrorise the universe at large the Doctor looks for the nearest ladle. With the Master gone, the timeline and the Doctor's friends are safe and if he has to die to make sure that his oldest enemy bites the bullet then so be it. The Master thinks it is easy for the Doctor to play the rebel when he was always the teachers pet. The Doctor chides the Master for daring to use the names of his friends that have died...and for suggesting that Molly was marked the moment she met him. Does the Doctor run because he doesn't trust himself to stay around and face the consequences of his actions? Russell T. Davies made a similar argument in Boom Town and I have to wonder if there isn't a grain of truth in the idea. 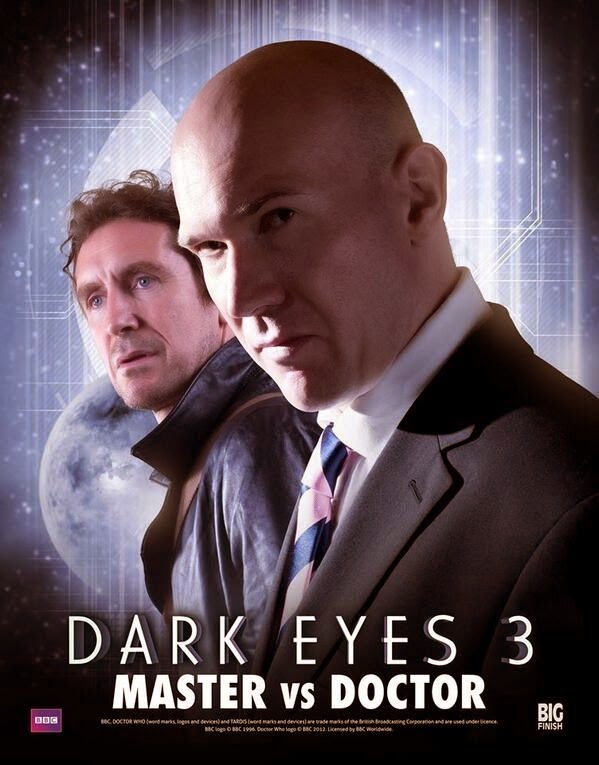 Alter Ego: Of all the ways the Master could niggle the Doctor, calling the TARDIS an antediluvian bucket of bolts takes the biscuit. After being so in control throughout the first two adventures it is nice to see the Master caught out for a change and forced to improvise. Things have been going a little too well for him of late and now it's time for the Doctor to intervene. The Doctor declares him a spoilt child that has to get what he wants or everybody suffers, the trouble being that he doesn't know what he wants beyond killing the Doctor. According to the Master they both want to change the universe, it is only the scale of their ambition that sets them apart. Why doesn't the Master kill the Doctor when he has the chance? Is it because he doesn't want to? Or is it because he needs the attention he so desperately craves? Humans come and go in the blink of an eye, he doesn't understand why the Doctor gets so worked up over them. He simply wishes to maintain order, that's why he plans to control the universe. They were friends once but the Doctor maintains that he outgrew the Master and his pathetic schemes. He enjoys hurting people, he enjoys being irresponsible...if that makes him evil then so be it. He wants peace just like the Doctor, which will only happen when the universe is of one mind. For a moment he is remorseful at the loss of Sally...but only for a moment.

Martyr: I wouldn't say that Liv hasn't worked as a character before Masterplan because she is being played by Nicola Walker who is a fine actress and she could inject life into the weakest of characters. However I would say that, Robophobia aside, she has hardly marked herself out as anything special from the norm. A reasonably resourceful woman with a decent moral code? Hardly enough to set my world on fire. In the comparison stakes I would say that Molly (loathed by some) was far more interesting because of her fiery personality, passion for their travels, interesting accent and history as a wartime nurse. However, things have started to turn around for Liv in this story, especially during the sequence where she gets to lock horns with Sally and try and work her way inside her head. Sally mocks it as amateur psychology but there is no doubt that Liv attacks her with some fervour, an act of spite that shows that she does have some fire in her belly after all ('You and I know who the Master really cares about. It's Molly, Molly with the Dark Eyes. You? You're expendable. Your days are numbered, Sally, and you know it.'). Liv has come to accept her fate in grand scheme of things. If that means she has to be sacrificed to make things right then so be it. She looks forward to letting all of her worries go.

Standout Performance: McGann and McQueen excel in their two hander scenes together. It's as good a Doctor/Master chemistry as you have ever seen.

Sparkling Dialogue: 'We all rewrite history, Liv. Every day of our lives, every decision we make.'
'There's no genius without a touch of madness.'
'Who do you think you are, Doctor? Judge, jury and executioner?'
'It's not about the numbers. I look at what's in front of me.'

Great Ideas: Professor Schriver is brewing up the consciousness carrying gas that forms the Eminence, thinking that his research is for the good of humanity when ultimately his work will come close to destroying it. His work will result in untold suffering. It was given to him by the Master, meddling in history to create the Eminence and therefore allow him to increase his army of slaves in the future. I tell you what, he thinks big. Molly, awash with retrogenitor particles, is trapped in the teleportation casket and infusing the gas compound and stirring up what will become the Eminence. She is vital in the Infinite Warriors creation. The Master has scattered people across the stars spreading his antigen and when they are possessed by the Eminence the retrogenitor particles will react, combine and he will take control of them. He will be Master of all.

Isn't it Odd: I can understand why people might be a little under enthused by the amount of technobabble that makes up the Master's plan. Whilst I like the idea of him creating the Eminence in the first place and snatching their Infinite Warriors away from them (typically over complicated and devious but quite clever all the same) the use of antigens and retrogenitor particles and teleportation chambers does make the plan seem a little...clinical.

Standout Scene: Scenes of the Doctor and the Master psychoanalysing each other might not be everybody's cup of tea but when scripted this well they deserve your respect regardless. The fate of Sally is remarkably dramatic, you can't help but feel sorry for somebody who has had their ego fed so completely by the Master and been walked like a lamb to the slaughter.

Result: Some Doctor Who stories fail to generate one big dramatic idea but Masterplan juggles two quite adeptly and proves to be the finest Dark Eyes instalment to date. You have the notion of the Doctor and the Master confined in one location and forced to discuss their relationship and back story but there is also the whopper of an idea of the Doctor re-writing history simply because he doesn't like the way things have turned out. So much dramatic mileage in both cases and Fitton goes further than I have ever witnessed before to tackle both and with some success I might add. I have never been a huge a fan of the Master, I have to be honest. Not because I don't find the character a lot of fun (because I do) or because he has been performed badly (because everybody who has had a go - even Eric Roberts - has brought something fresh and interesting to the part) but because his ridiculous schemes are often paper thin and easy to untangle and because his motives (despite nearly 50 years worth of appearances) are often utterly vacuous. Masterplan goes someway to addressing that, to nailing down the love/hate relationship between the two Time Lords and probing the Master's psychosis. I found that rather exciting. I bet Paul McGann was excited by this script too as it offers the Doctor some dramatic opportunities and dialogue. His performance steps up as a result and his scenes with McQueen crackle with energy and tension. For once the sound effects and music are at a minimum and rather than playing out as an action adventure without pictures the whole piece is generated of the exploration of character. The central plot of the box set isn't neglected either, Masterplan showing how certain elements of the first two stories came to be. I've read complaints that this set is too slow to get anywhere (we are three hours in and this is still practical set up for the finale) but there has been a focus and intensity to the storytelling that was lacking in the first two Dark Eyes sets (they were more diverse and whimsical but lacked this kind of cohesion). A great script, bolstered by gripping performances. The only thing that stops this getting full marks is all the technobabble: 9/10