Dark Eyes III: Rule of the Eminence written by Matt Fitton and directed by Ken Bentley 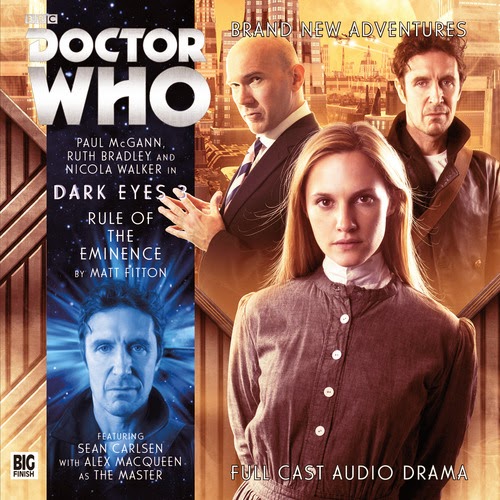 Damaged Goods: The Master doesn't fear the Doctor but he is a sanctimonious do-gooder of the sort that always interferes with his plans. He has to say goodbye to Molly to ensure that the Daleks, the Eminence and all the other nasties that want a piece of her leave her alone. What a pity to lose the sparky chemistry between these two.

Alter Ego: 'You twisted psychopath!' Bringing together Narvin and McQueen's Master gave me a little thrill, it felt like a union between Big Finish of old under the Gary Russell administration and the current Big Finish taken care of by Nicholas Briggs. The Master fears the Doctor because he alone has the power to defeat him. Will it prey on the Master that he actually helped to save a colony?

Dark Eyes: In a clever moment of deception it appears that the Master was responsible for Molly's dosing with the retrogenitor particles, stealing up on her in the war the Doctor took her away from and kick starting her part in his Masterplan. It's all smoke and mirrors though, it's just a dream sequence inserted to complicate things and reveal how Molly is being psychologically tortured by the Master. 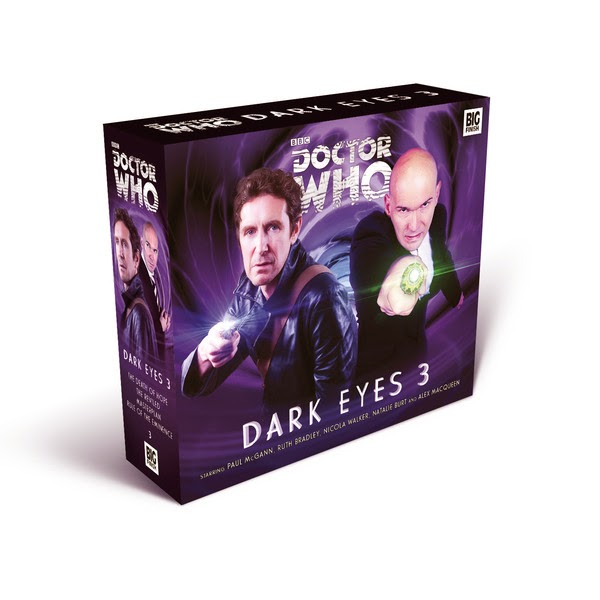 Martyr: Liv has gone from all the possibilities of the TARDIS to a glorified nurse maid at Molly's side. She misses her friend though and will do anything to make sure that she is okay. The Master is so sadistic that he had cured Liv a long time ago but neglected to tell her - he says it is because he thought she had come to terms with it but I have to wonder if it wasn't just because he enjoyed making her suffer knowing he could take that pain away. Liv talks about an exciting time when she travelled in the TARDIS with the Doctor and Molly - it is a shame that we haven't been able to experience any of their adventures as I am sure the three of them would make a fine set of regulars for a trilogy of adventures or two. There's a cute moment where Liv asks to join the Doctor on the TARDIS and see the universe, something I heartily approve of (although Molly should have gone along too). Let's hope that next time around she is a bit more cheeky and less miserable, especially now she knows that she isn't dying.

Standout Performance: There was something a little off about the way that Ruth Bradley interacted with the rest of the cast. I haven't had the chance to listen to the interviews feature so I'm not sure what the situation is but both her vanishing act from the central story and her distance from the other performances leads me to believe that her lines were fed in later. Correct me if I'm wrong. Should you really call a series Dark Eyes when the reason for that is now your least prominent feature?

Sparkling Dialogue: 'You do rule the cosmos but only when you're all that's left.'

Great Ideas: Narvin may work for the CIA but he doesn't necessarily approve of their methods and where possible he tries to mitigate them. That's why he has headed back in time and created a position for himself - he always was a sneaky bugger. The American newsreader immediately brings to mind The Seeds of War (and also lashings of Gridlock) and the announcement that the war between the Eminence and humanity being over seems like an unusual place to open the culmination of the Dark Eyes 3 box set. Fortunately we have the Master on hand to point out that with his tinkering things really aren't as salutatory as they seem.

Isn't it Odd: The reason that the first two stories in the Dark Eyes 3 set were so effective at putting across the horrors of the humanity/Eminence war was because we were able to get down in the trenches (so to speak) and up close and personal with the victims. Rule of the Eminence wants to play a much different game, aiming for a more epic approach as the broad sweep of the war is reported and manipulated. As a result you lose that personal touch that made those early instalments so gripping. When your identification figures are the Doctor, the Master and Narvin you lose that personal contact with the characters because they all have secrets up their sleeves. They're all playing games. Molly and Liv are kept at a distance, which doesn't help. I personally felt that Fitton did a better job of capturing the human face of this conflict in The Seeds of War because it managed to explore the dramatic turn of events through the eyes of handful of intimately drawn characters It was a family too which intensified the emotional connection with the audience. Whilst the story that plays out in Rule of Eminence was exciting enough, I never felt personally involved in the story. There was an opportunity here to really get under the skin of the Master (which was achieved as best as I have seen it done in Masterplan) and to tie that into his overall plan so we get a strong link between why he does what he does and the ultimate expression of that psychology in the linking narrative. I was expecting...something a little more than him just wanting to take over the universe because. It's what I have said about the character all along, he's pure panto with relatively little depth to him other than to embrace the role of a villain and try and control people. Beyond that, there doesn't seem to be much more to say. The moment where Molly realises that she has been conned should have been climactic and powerful but because of her lack of involvement in the set it feels tacked on and irrelevant. I'm starting to wonder about the dramatic possibilities of the Eminence too. Created out of technobabble and merely a tool for the Master to take over the universe, they've gone from being a mysterious possessive force to a plot tool over the course of these four stories. When it was the Doctor being possessed in The Seeds of War I was perfectly convinced that they could emerge as the new Big Bad but now as stooges to the Master they've lost their edge. A means to an end more than anything. The Eminence are dispersed, the Master gets away, Molly is saved and Liv isn't dying. All very neat, all very predictable. You see what I mean about expecting a little more? To the Death might not have been subtle but it sure made a massive impact on the listener. This was just...box ticking. Is this the end of Molly? I hope not, she was one of the more unique Big Finish companions and I genuinely think that Ruth Bradley did a superb job. I would love to see some non-Dark Eyes stories with her character, a bit like those we had in the first box set.

Standout Scene: I rather enjoyed the moment when the newscaster went from reporting the events of the war to a propaganda puppet for the Master.

Result: A bizarre story and a disappointing climax to what has generally been the strongest Dark Eyes box set. After listening to this I get the same feeling that I used to when Russell T. Davies was racing towards the culmination of one of the four and a half seasons he plotted. Seasons dropping intriguing hints and building in elements that cohere wonderfully in the penultimate episodes (The Sound of Drums and The Stolen Earth are possibly my favourite episodes of their respective years) and promising one hell of a dramatic conclusion. And then nothing. Or nothing as impressive as I was expecting. Dark Eyes 3 feels like that. Like it had real confidence in its various plot elements (the Master, the Eminence, the war) and explored them all in dramatic circumstances whilst pulling them all in the direction of The Rule of the Eminence where they should have dovetailed beautifully and brought the whole thing to a satisfying conclusion. But it kind of feels as though all the juicy stuff has been dealt with (the Doctor/Master therapy session was the highlight of the set) and this is merely a box ticking exercise to get the story where it needs to be for Dark Eyes 4. It doesn't help that the titular focus of the range has been sidelined so spectacularly throughout these four instalments and so giving Molly such focus now seems like a distraction. More of an administrative exercise than a piece of drama; the Master's plan is revealed and he's not up to anything original, he's defeated and the war is brought to an end. But all of this is done in a perfunctory way without much in the way of drama, sacrifice or desperation. The technobabble catalyst at the conclusion was the biggest shocker and perhaps the greatest indication that this arc has lost its heart at the last hurdle. Perhaps hanging a 16 story arc on retrogenitor particles was a mistake: 4/10