What's it about: It’s the endgame. Truths will be revealed, and a hero will make the ultimate sacrifice...

Breathless Romantic: Travelling in the burnt out remains of a TARDIS is a risky business, literally exploding into the time period and causing devastation. I mean it as the highest of compliments when I say that I would like to see it on screen. Every now and again the Doctor pushes things too far and gets a slap around the chops for his troubles. Suggesting that a human being, any human being is as bad as the Daleks might just be a step too far. When the Doctor is saved by the Dalek Supreme he makes it sound like it is the last thing that he would ever want to happen, he practically spits the words. The Doctor is not looking to fight a war but he will fight the Daleks if and when he has to.

Liv Chenka: I think I know what is the biggest difference between the Liv Chenka of Dark Eyes 3 (who was hardly thrill a minute) and the Liv Chenka of Dark Eyes 4 (who is practically a seasoned time traveller and enjoying terrific chemistry with the Doctor) and that is the self assurance of how Nicola Walker is playing her. It is almost as if somebody clapped Walker on the back a heck of a lot between the two sets and she has walked into this production with a confidence that she is doing absolutely the right thing. If you would have told me that Liv would have been one of the highlights of Dark Eyes 4 before I heard the set I probably would have laughed in your face but now I am ready for a fresh storyline featuring this dynamic duo. Whilst she does care about Molly, Liv has also lived through Dalek occupation and understands that the Time Controller has to die even if it means sacrificing her friend. There is a moral debate between her and the Doctor that really strikes a chord and left me wondering what other kinds of situations these two characters could be dropped into to have the same kind of conflict. This is hardly the most convincing of scenarios but a juicy historical might just be the ticket. Live says that she will stay with the Doctor for as long as he needs her and he is happy for her to come along.

Molly O'Sullivan: Anybody who was breathing a sigh of relief thinking that we had seen the end of Molly and her happy go lucky phrases of 'tardy box' and 'the Doctor' might be displeased at the beginning of this adventure. I was never irritated by the character, I have to say. I found her forthrightness and foreign brogue rather refreshing. I'm pleased that Dorney and Fitton found a way for the character to return before the end of the series, despite Ruth Bradley's unavailability, because there would be little point in continuing to call the series Dark Eyes without the titular character and it would be rather odd for the opening half of this epic serial to be so obsessed with Molly and for the concluding half to forget all about her.

Great Ideas: In this reality The Eye of Orion is a Dalek research and development facility, a secret installation hidden in plain sight. The Dalek Time Controller has completely fallen out of favour with the Daleks. Markus Schriver has created a gas that is capable of carrying a living consciousness, living beyond death, a single infinite mind: the Eminence. The Dalek Time Controller wants the Eminence to serve him but we know from previous experience that things don't quite work out that way. Schriver's mind is transferred into the gas, constant and omnipresent. The Time Controller lost his moment to become the consciousness of the Eminence because it attempted to murder its creator. The Daleks will never learn, always killing and missing out on opportunities. Corrupted by retrogenitor particles and corrupted by the time vortex, the Dalek Time Controller has rather made a rod for his own back. Time has been rewritten over and over again and with each draft it has been separated more from its kind. 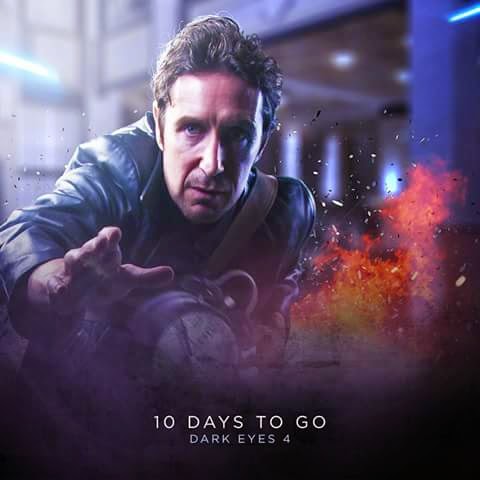 Isn't it Odd: The big revelation at the end of Dark Eyes is...that the Doctor created the Eminence all along. Big woop. I don't think anybody is that excited about the entity by this point anyway. Although it does have an interesting effect when you think back to how the Eminence has abused the Doctor in his past incarnations...something set in motion by himself in the future. Somehow (and I'm not entirely sure how except to provide a conclusion of this story) Molly and the Time Controller have become symbiotically linked and so if one of them dies then the other sees the same fate. Can you possibly imagine where this story is heading? You can hardly build a tragic conclusion around a co-incidence that happens because the writer simply says so. The Dalek Time Controller has had its day and so it is going to take Molly with him...which feels like a manipulative way to end this story. Killing her off because the writer wanted to make an impact rather than because the story demanded it.

Standout Scene: When the moment comes, Molly's sacrifice is touching but that is all due to Cusack's performance rather than anything that comes out of the script. It is simply too calculated a move to really have an emotional impact but the lines are delivered in an intimate fashion.

Result: 'History is being forged around us!' And so Dark Eyes comes to an end not with a culmination of 16 stories worth of material but a manipulative and technobabble laden piece. The first half of this story feels like you have stepped in to the second half of a narrative without first hearing the first half, it rather takes a lot for granted without explaining a great deal. It feels like it wants to bring the saga to a conclusion just because rather than because this is where it has been leading. The Eye of Darkness is a bizarre experience, not the sort of epic madness that Big Finish usually attempts when bringing a long running story to a close but more of a box ticking exercise with lots of things slotting into place quite neatly. Frankly I think the former approach might have been more appropriate given the insane portmanteau of stories that has come before this. This set should be aiming for a To The Death style climax, something shocking and unforgettable but instead it drowns in technobabble (since when has Doctor Who ever relied on scientific jargon over narrative satisfaction?) and absurd (rather than shocking) twists. Is this really what the Dalek Time Controller has been attempting to attain the whole time? To become the consciousness of the Eminence? Did it really have to go to such long winded efforts to achieve what is essentially a very simple task? I was expecting something more somehow. So what to make of this Dark Eyes experience? Has it been the best that Big Finish has to offer? No, it has been far too bloated, unfocussed and disjointed for that. But has it been a unique experiment taking in a myriad of locations, characters, big, bold ideas and a chance to show how immersive the audio experience can be with Big Finish Productions? Absolutely. I would recommend a listen because it gave Paul McGann some unique opportunities, it introduced us to Molly O'Sullivan and Liv Chenka (who after some ironing out turned out to both be fine companions), it revelled in the use of the delightful Alex McQueen Master and because it gave the Daleks a brand new barking mad figurehead in the Dalek Time Controller. No matter how scattershot and crazy  the plotting might have been, these characters kept the whole thing bubbling along a enjoyable to listen to. However it has fallen at the last hurdle during the last two sets leaving a bad taste in the mouth, a damp squib of an ending where a rousing finale was required: 4/10

You seem to be correct with this one. The series really did not end well. Not a complete failure , but something was lacking.