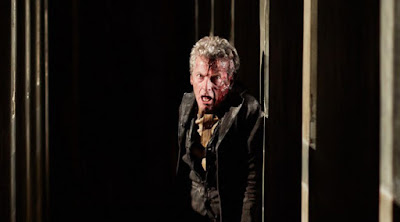 An instant classic and the best thing that Steven Moffat has written in simply ages, far surpassing even Listen and Dark Water last season. I have been critical of series nine to date for not being bold enough to follow through on it's promises. That for the most part it has been one could have been episode after another (check out my review of Sleep No More for further explanation). Heaven Sent is not only brave, it practically redefines what an episode of Doctor Who can be and Steven Moffat achieves that by smashing through the boundaries and changing the shape of the series into something entirely unique. Just for one astonishing episode. The presentation, the horror, the strength of performance, the poetry in the writing, the surprises...everything about this episode is adult in a way that NuWho rarely dares to be. Where's the smugness, the self referencing clever cleverness, the self-satisfied one liners, the foolish humour and dearth of characterisation that has come to characterise the Moffat era? Are you telling me this is how good it could have been since he took over? It's one of those stories like The Waters of Mars that could take place at a particular point in the Doctor's timeline, which makes even it's placing entirely unique. The Doctor has lost his best friend and is trapped in his own personal hell. It's a terrifying labyrinth inside a puzzle box where he is stalked by a dark wraith that seeks not his fear but his honesty. Peter Capaldi gives a career defining performance in what is practically a one man show and he riveted me to my seat for almost an hour. I don't even remember breathing. It's a bold move to show the Doctor this afraid and this menaced by his personal demons since he is our constant companion in this show and he is the one that the kiddies latch onto for comfort. Goodness knows what they made of this existential nightmare...I can imagine they were either sitting there in a cold sweat or yawning throughout. Funnily enough this is one of those stories that I probably wont revisit too often. Like Genesis of the Daleks, The Caves of Androzani and Midnight it has a fatalistic tone that could leave you reaching out for a razor to slit your wrists. I tend to stick the more entertaining stories on when I am in the mood for a Doctor Who (the discs of The Romans, The Stones of Blood, The Two Doctors and The Unicorn and the Wasp are almost worn out because of their exhaustive viewings) and this will be one to savour once every couple of years to remind myself of how good Doctor Who can be when it pulls out all the stops. I was genuinely terrified in parts, beguiled in others, mystified and simply dazzled by the baroque imagery throughout. Heaven Sent ends with a humdinger of a cliffhanger too. I said to Simon that I was expecting something massive to come out of this nightmarish episode and Moffat has chosen precisely the right moment to spring the Doctor's homecoming on us. Simply breathtaking: 10/10
Posted by Doc Oho at 00:22

I think Heaven Sent is by far the most successful attempt at codifying the character of the 12th Doctor to date.

The nature of the Prison is revealed to the audience slowly, allowing us to puzzle out the mystery along with the Doctor. By not trying to defeat the audience with cheap, 'clever' twists; the episode avoids being smug and becomes horrifying as the hopelessness of the situation hits us. Putting us on par with the Doctor for most of the episode enhances what separates us from him in the end: we can see the rules of the game, but only he can break them to escape.

This characterisation of the Doctor; as a not supernaturally perceptive man who, without arrogance or triumphalism, is possessed of a ferocious willpower; is by far the strongest we've seen in these two years.

Taken as a pair Heaven Sent and Hell Bent really encapsulate Steven Moffat's Doctor Who. His writing in these two episodes runs the gamut from subtle to gross, brilliant to stupid, deeply personal to inhumanly glib; but in both you can see his endless fascination with the machinery of story and love for big ideas.

I both hope that freed from the burden of continuity of the last four years Doctor Who can offer more exciting stories like this in the future.

[Overindulgent comment over! Merry Xmas to you and the husbando, Joe]

I absolutely loved Heaven Sent. A really original episode where the horror really comes through at the end as the Doctor (looking at the stars) in counting the years. And he ended on the "one hell of a bird" line. I loved that.

I was a bit unhappy that it seemed that he was in for slightly over 2B years in this but then Hell Bent changed that to 4.5B years. Its a minor quibble and I pretty much agree with your review there - the sequel has bigger problems.

I also initially thought I wouldn't be rewatching Heaven Sent too many times; I can't recall other times where the Doctor has been portrayed to be so badly physically injured, reflecting more human nature than timelord! However, I've watched selective bits repeatedly by now. Despite the grim tones, I continue to be delighted by the captivating long soliloquies (although I guess they're monologues addressed to Clara), the stunning directing, the sonorous soundtrack (Murray Gold, you've done it again!), the expertly executed editing (of that montage of all the years), and of course Capaldi's impeccable acting! This classic episode has been the epitome of Doctor Who in recent years for me,and the Whovian in me can't help but weep with joy!

As a viewer I find I have a low tolerance for frivolity and tradition. As a Moffat cynic, even I had to hand it to him for literally breaking the cycle Doctor Who has found itself in. He is basically kicking the crutch out from future writers, challenging them to top this, the ur-regeneration story (they cannot). I prefer Moffat as a bomb-thrower. If evolution is impossible, can we only go backward, or venture to realms unexplored…?

While he resets the show back to factory settings in Hell Bent, it's unfortunately to be expected, while the Doctor can punch through a diamond wall the producer of Doctor Who is expected to leave things pretty much as they are for the next showrunner. Status quo always reasserts itself.