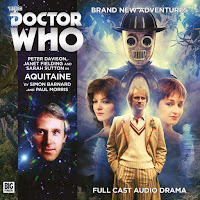 What's it about: Today should be much like every other day for Hargreaves, the computer consciousness that co-ordinates daily life aboard the spaceship Aquitaine, stationed on the outer fringes of a black hole. Water the plants, run the diagnostics, cook the Captain’s breakfast; then tidy the plates away, rotate the ship, clean the windows of the observation deck. When at last the day’s work is done, Hargreaves will dim the lights in the sleeping quarters. But no-one will sleep aboard the Aquitaine tonight. Because the Aquitaine’s crew is missing. But today will be different. Today, a space/time ship called the TARDIS will materialise in the botanical section, bringing the Doctor, Nyssa and Tegan aboard the Aquitaine. Together, they’ll seek to discover the truth of what happened to Hargreaves’ crew… if only the ghosts will let them.

Mouth on Legs: That fabled chemistry between the Doctor and Tegan on TV (but was rarely in evidence) has been cultivated and nurtured by Big Finish and the actors who have become firm friends over the years. As a result their interaction is bouncy and fun and completely relaxed and is very much on display in Aquitaine where they have many scenes together. Tegan thinks that Nyssa is far too good for this world and sometimes wishes that she could be more like her. How wonderful to hear Tegan talking so positively about the TARDIS, calling it home. When Nyssa and Tegan are reunited you genuinely feel the bond between them, it feels like a moment of triumph.

Alien Orphan: I think it is long past time that I celebrated the work of Sarah Sutton at Big Finish. I believe I had a little overview of her time in my Big Finish Introduction but she has brought out a wealth of adventures since then that have added to her lustre as the fifth Doctor's ultimate companion on audio. I recall during the Hannah Bartholomew trilogy that I was getting a little tired of her taking up this incarnations time when other companions weren't getting a look in. It is true that that was a particularly weak trilogy that did not serve her well but since then we have seen the older version of the character go out in real style in one of the strongest trilogies of recent years. It seems again that she is featuring in another particularly strong trio of stories. Sutton is such a solid actress, never giving anything less than a decent performance and impressing with her dramatic skills at best. Whilst it would probably turn my hair white to work out just how much audio running time she has featured in, I think it is worth giving her a round of applause for sticking with Big Finish and continuing to knock out one strong performance after another. I don't know what Jamie Anderson is putting in the tea but listen to Sutton in this story - she is on top form. I love how Nyssa manages to play the logic card on Hargreaves and take charge, she always was a slave to logic so naturally she bests it.

Standout Performance: Some performers seem instantly perfect for a role and Matthew Cottle emerges from the first scene as Hargreaves in such an engaging, funny and touching manner that you cannot imagine anybody having a stab.

Sparkling Dialogue: 'Which of these lines is Tegan?' 'The spiky one.'
'Have you ever considered a beeswax polish?'

Great Ideas: Immediately comparisons with the Red Dwarf episode Kryten are apparent with an android stationed alone with no company and a crew that have long since departed. But since this is new waters for Doctor Who that is hardly a problem. The show has hardly been shy in showing it's roots over the years. When Hargreaves has head removed and he continues enjoying a dialogue with the Doctor the roots were showing even more. The TARDIS has been greeted with many a reaction but nobody has seen fit to dust the old girl before. A vessel collecting botanical samples at the outer fringes of a black hole. Not exactly the safest place in the world to catalogue plants. With Hargreaves constantly rebooting every time an Ergostorm hits the Aquitaine has been circling the black hole for over 50 years. The Black Hole is collapsing and sucking the Aquitaine closer and closer, inch by inch. The time storms are becoming more frequent as they draw nearer to the terrifying phenomenon. The crew know it has been a long while since the black hole started dragging them in because they might be looping but they are ageing too. Some were mid twenties when this voyage began and are now approaching their sixties. Their whole lives eaten up by this insidious spatial occurrence. Plant samples were taken from Vetrius Three with promising applications for human health. It was dangerous and needed to be handled carefully and Freya was clumsy and became infected. She started to transform into a hybrid of human and plant and the only way to halt the progress was to put her in suspended animation. It turns out this was its method of reproduction and to halt the transformation would be to murder a new species. Akunin is pretty much up their with the best of the batshit crazy scientists, helping to cultivate an obscene new life form because he would have the honour of being its originator. To prove his ego is bloated out of all proportion he even names them after himself - the Akunites! Like the end of Caves of Androzani episode three the Doctor goes suicidal, calling for Hargreaves to pilot the Aquitaine into the black hole. In a very sweet moment, Hargreaves feels incapacitated when torn free of the Aquitaine. He has been part of it for his entire 'life.' It was around this point I was hoping that the Doctor would keep him on board the TARDIS, an idea touted by Tegan and Nyssa.

Audio Landscape: In Tegan's own words, a terrible racket in the TARDIS console room alerting them to a distress call, screams in the distance, Tegan being dragged under the moss, the shuffling, rustling creature, siren, thunder.

Isn't it Odd: Plants that infect and transform human kind? Can anybody say Varga? Especially apparent given the very last story that I reviewed featured the Daleks pet carnivores.

Standout Scene: There was a very chilling moment when Nyssa is told that there is no antidote for her infection and all they can do is make her comfortable. It comes completely out of left field and genuinely feels like a sudden death for the character, it is so well played. This is told completely from Nyssa's point of view but it's impossible to know Akunin's part in the plot at this point. In hindsight his decision here makes perfect sense.

Result: There is a touch of the NSA Sick Building about Aquitaine (especially to episode one) and a brand of humour and lightness of touch that is unique to Paul Magrs. Which is astonishing given he is booked in for a release next month. Barnard and Morris do have a similar penchant for capturing the fluffier side of Who as Magrs but if you had given me this story to listen to and not told me who had penned it...well my astonishment would be visible. On a completely unrelated note that would be quite a fun game to play - to buy 12 main range stories and try and guess who has written them by the tone, atmosphere, characterisation, plot, etc. I think Briggs and Barnes would be easy to spot, Platt and Jonny Morris too. Aquitaine is, much like the previous story, a real hoot to listen to but this time the direction belongs to long timer Ken Bentley. I was quite impressed at the moments of danger that were littered about the story; Nyssa being pursued by a defeatist surgeon, Tegan almost subsumed by carnivorous moss and the constant threat of the Ergostorms and the gulping black hole. If things get a little quiet it is not long before an exciting set piece kicks in, superbly realised by Bentley. I thought the end of the second episode was particularly strong. Not a moment of false jeopardy featuring regulars from TV that we know aren't going to die in this adventure but a culmination of the facts gathered in the first two episodes delivered as a deductive conclusion. I was starting to get a little concerned about the random circumstances but this pause in the action and elucidation of the plot proved just how well structured the script is. Aquitaine is a layered story, one that appears quite simple to begin with and gets more complex as it progresses before all the strands neatly tie together at the climax. It feels crafted rather than simply written. That's two for two for this trilogy, it would appear that Davison is getting much of the best material these days. Extra credit for the characterisation of Nyssa, which was stand out: 8/10

Top drawer cover art, as always. Though I'm not sure about transplanting Davison's "U mad, bro?" expression onto his young body!

Hello Joe,
I know this is utterly off topic of your actual review, but since I have seen you review various TV shows apart from Doctor Who, I wanted to ask if you have ever watched the Terry Nation serie Survivors, from the 70s (and a new version was made in 2008 I think) and if yes, there is a possibility of you reviewing it? (and the Big Finish audios based on it, with the great Louise Jameson among others)

Keep up with your good work

It's a delight to hear the good chemistry the actors have on the studio. Back in the eighties both Tegan and Janet (in her opinions about the show) were so acid that you touched her and get your fingers burnt. Now it seems that Janet is enjoying herself with these audios and Audio Tegan is a delight!
I have absolutely nothing against Nyssa but I would love a trilogy with Five, Tegan and Turlogh since this threesome has barely been explored.
This story reminded me strongly of something Jonathan Morris would write(playing with time travel and time in general) , if I was to do the "guess the author" game I would point on his general direction

I don't know why but I couldn't get into this one. Hargrieves was delightful, the crews deaths were synister, but for some reason i always felt as if the story was wanting to go somewhere and didn't, every episode felt like the first episode for some reason, just with more and more timy wimy.
In fairness I don't know if on this occasion that is me or the sotry's fault, I suspect this is a story I'll get more out of second time around when I can put all the pieces together rather than waiting for progression which doesn't happen, sinse with the exception of Missa's illness most of this story seemed to be piecing things together after the fact from past events and time tracks rather than actually going forward with new information.

Just finished listening to this one. I'm inclined to agree. It would've been neat if the Doctor had taken Hargreaves with him as an interactive AI for the TARDIS, kind of like Handles in Time of the Doctor.