The Isos Network written and directed by Nicholas Briggs 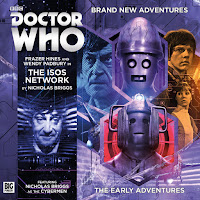 What's it about: The Doctor, Jamie and Zoe are leaving Earth after having successfully defeated a Cyberman invasion… The Cyber-fleet is still exploding… But something is escaping through the mass of vaporising debris. In hot pursuit, the Doctor and his friends find themselves drawn to a mysterious planet where strange beasts slither through the streets of a deserted city… And an old enemy lurks beneath the streets. As a force of heavily-armed aliens arrives, a battle to save the entire galaxy from invasion begins.

Giddy Aunt: The Doctor makes a very good point that the Cybermen would have no need for a beautifully sculptured city as they have no emotions and therefore no sense of aesthetics. If they are here on Isos, it is certainly not immediately obvious. Impish, bright eyes burning with intelligence...that's about the closest you will get to character description and development here.

Yahoos: What a shame this story is so plot focussed (or rather moment focussed because the plot vanishes up its own arse after episode two) because it means Briggs fails to give the companions any characterisation whatsoever. It almost doesn't matter, Hines and Padbury are so good at recreating their roles that by default they leave the story with their heads held high (and because their turns at narrating are so strong, they are pros at narration now). But you could literally play mix and match with 60s companions in this story and it wouldn't make a great deal of difference. Jamie shows little of his historical ignorance and Zoe little of her super brain and so it really wouldn't matter if this was set in seasons four or five (aside from the fact that it takes place after The Invasion). Companion placement wise, it could feature any where in the Troughton era.

Standout Performance: Kudos to Frazer Hines, an impeccable performer who is giving three performances in this story; the Doctor, Jamie and one of the narrators. Each requires a different accent and pace and I'm impressed at how effortlessly he skips from one to the other. I'm not sure what everybody else is banging on about, his is still the most authentic representation of the Second Doctor that isn't Patrick Troughton. And if I've said it before, I'll say it again, he and Troughton were extremely close. The ultimate Doctor Who bromance. And that just makes his loving interpretation all the more touching. No it's not perfect because he isn't Troughton but it's certainly the best Big Finish can do. It's good enough for me.

Great Ideas: A quick shout out to the cover, which is absolutely gorgeous. I'm not sure that I make enough fuss about the Big Finish covers lately (another reason I have to thank a regular commentator on my blog) and especially when you compare them to how they began with some hideous photoshopping. Some of the recent efforts have been almost artistic (taking that to an extreme with stories such as The Abandoned). Briggs certainly know how to open a story, a moody description of the Cyber fleet blasted into atoms in space in the wake of events in The Invasion. A cyber fleet going up in flames doesn't vaporise in the wink of an eye, it continues to self ignite like a series of beautiful fireworks (which is certainly more vivid than the matchbox modelwork we got in the actual story). I like the way that Briggs plays with our perception of what to expect from a Doctor Who story in episode one, featuring revolting giant slugs that menacingly surround the Doctor, Jamie and Zoe only to turn out to be gentle, unassuming creatures. We're always told to appreciate that aliens come in different shapes and sizes and yet it appears that this Doctor Who fan is still a little aesthetically prejudiced. The Isons were a thriving colony until the Cybermen came, long ago. This was their base of operations from which they launched their invasion of the Earth in the 1960s. Everyone on Isos was brought to the undercity, the Cybermen showed no mercy and nobody could resist them. No-one was spared from conversion.  The slugs have been laying their eggs in the power system, affecting everything.

Audio Landscape: Ever since I heard his incredible design work in Not a Well Woman, Toby Hrycek-Robinson has been a name I have always been on the lookout for. In a story like this, where the sound design is the be all and end all it is worth celebrating just how sterling a job the man behinds the nuts and bolts of the story does. His sound design guides us through this story, thrills us, delights us, tickles our fanboy fancies. This story is only as good as it is because of the sound design and music. The TARDIS under the influence, noises emanating from alien countryside, a ship bursting through an atmosphere, giant slurping slugs, Jamie sliding down an elevator, somehow Briggs manages to evoke a missing city, humming Cyber-pods, Cybermen cutting through solidified slime, slugs versus Cybermen which results in a Cyberman's chest unit being ripped away and a nasty bubbling substance pouring forth, Cybermen screaming, laser fire, a Cyber massacre the way only Nick Briggs can pull off, violent Cyber deaths, a train heading down the tracks, the terrifying voice of the Cyber Controller, pods moving off.

Musical Cues: Just listen to that music at the beginning of episode two, distressingly melodramatic and authentic. I loved it. Took me straight back to the sixties. 'The Cybermen have come back and if they find you they will turn you into one of them!' - the music even has the audacity to go DUM DUM DUMMMMM! Classic sixties Who and it even felt a little Star Trek. Let's just call it classic sixties. The music reaches new levels of drama in the last episode, matching the hysterical tone of the action.

Isn't it Odd: The threat of conversion, a new Cyberman army being built, a fresh fleet to head out into space, the Doctor attempting to sacrifice himself, the ultimate sacrifice coming from an unexpected source...all very mundane. It's not like we've never seen any of those things before.

Standout Scene: It's an obvious moment but Jamie discovering the Cyber-pods open is so eerily directed I couldn't help but get caught up in the action.

Result: A Cybership escaping from the fleets destruction at the end of The Invasion, an deserted alien world with a missing colony, a military battalion forcing it's way into orbit...The Isos Network certainly kicks open in vivid style. The Isos Network isn't going to win any points for innovation (surprise surprise) because it is essentially a coda to The Invasion and adds little lustre to the story it is piggybacking off of. What it does dish up, however, is a authentic slice of 60s Who complete with spine tingling sound effects, a glorious score and lots of plot elements that feel right at home in a Troughton SF tale. There's no point where the plot will surprise you but with a cover like that were you really expecting anything other than pure nostalgia? So I suppose the question is...is there a place for stories like this? Stories which serve as nothing but to give fans the giddy joy of listening to something that sounds like it has emerged from the era they love, an extended audio love letter to the past? I guess so. But Big Finish have opted for this approach an awful lot in recent years, especially with the advent of the 4DAs and I would therefore suggest that a range with the length and breadth of possibilities as the Early Adventures (even more than the Companion Chronicles) plumps for a more original, daring approach. Saying that...I rather enjoyed this. When you favour the sound design and music over the plot and characterisation things can't be that grand but if you accept it on those terms this passes a few hours rather amiably. I thought the narration worked really well in this story more than other although I have heard some comment that it was too mannered and prevalent, it added plenty of detail and pace to the story and switching between Hines and Padbury (both superb) kept things ticking over very nicely. Even saying that it loses impetus with each successive episode; excitement in episode one, claustrophobia in episode three, action adventure in episode three and a typically easy wrap up after a run-around in episode four. It's the sort of story that exists just to exist that I wish I didn't like and if it hadn't been as brilliantly made as it is I probably wouldn't have...but I have to say I was fair entertained throughout. A true indication of the plots worth is that I really didn't need to finish this in order to find out how this story ended, it was kind of obvious: 6/10
Posted by Doc Oho at 00:40

Well this is weerd sinse I agree this was a pretty generic story, however I really! enjoyed it.
I'm always a sucker for an alien environment, and the hole ide aof a cyber railway network with cyber convertion pods down the tracks and giant slugs on the junction boxes had something appealing about it for me, I particularly loved the little touches where the environment got explored like the cyber slug fight or Zoe hiding in a box with the half converted cyberman.

In a way I was rather sorry the story didn't go further in exploring the history and environment of the world more and I thought the hole final big jeopardy with the train car and hyper drive felt totally off, but I give this one credit for being very immersive, even though it wasn't exactly ground breaking or covered in major plot twists.

Oh, and I felt the idea of someone being half cyber converted and spending goodness knows how many years wandering around the catacombs alone was down right depressing, a shame we didn't learn more about this character.
I wouldn't say this story ran on nostalgia, though I can see where that idea came from sinse I did love the environment here, I would say this one missed it's potential, especially in trying to provide a slightly different take on a home planet, or at least a base of opperations for the Cybermen seen in The Invasion.

Still, it was fun, albeit thus far only The Black Hole has really been a particularly out standing early adventures story and even that felt more like an extended companion chronicle, I really hope Bf pull out the stops and do something unique with this who recasting for the early adventures in the future.