Beachhead written by Nicholas Briggs and directed by Ken Bentley 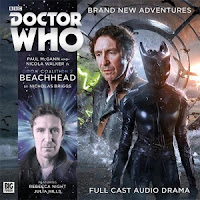 What's it about: In an attempt to recharge his batteries after his confrontation with the Eleven, the Doctor takes Liv and Helen to the sleepy English seaside village of Stegmoor. But they find the village in turmoil and, to make matters worse, their arrival uncovers a mystery from the Doctor’s past which threatens the future safety of the planet. Can the Doctor prevent the Voord from invading Earth? And more importantly why have they come in the first place?

Physician, Heal Thyself: In a very similar way that important plot points were flashed up in big letters during the Trial of a Time Lord only to be dealt with later, the Doctor gets a sniff that something is prodding at the edges of space and time and chooses to ignore it. Let's keep that in mind. I really love the idea of a gentle idea travelling with two women who both support him and keep him in check. It really feels like a relationship of equals rather than the Doctor taking charge. Trust the Doctor to land the TARDIS in the path of a tidal wave. It's typical of his kind of parking. He has no qualms about revealing his true identity to Phillipa given she knows him already, he admits he is a time traveller and another version of the same man she met years ago.

Liv Chenka: Liv takes charge when the Doctor is incapacitated, given she is the more experienced traveller. She's quite adept at spotting unusual activity especially of the alien kind.

Helen Sinclair: She's coming to terms with the fact that she can get in touch with people in her life but in a different point on their lives. It's not the first time I have heard this idea being pondered (Charley certainly did) but it's still one that it relevant to somebody new time travelling.

Standout Performance: Whilst I enjoy both Liv and Helen, I find the voices of Nicola Walker and Hattie Morahan quite similar sounding and it is a lot easier for me to understand who is talking when they are separated.

Great Ideas: A gay relationship in Doctor Who? Whatever next! We've moved on quite substantially from the times when a disgruntled reader might write into Doctor Who Magazine about the contemporary companion locking lips with a member of the same sex. One thing that both Russell T Davies and Steven Moffat have achieved is to make the idea of gay relationships something that is entirely natural within Doctor Who itself. A huge step, not necessary for the series perhaps but certainly necessary in general on television. Big Finish have never been backwards in coming forwards about homosexuality in their output either. I've heard countless references over the years, certainly in spin ranges such as Dorian Gray, Torchwood and Bernice Summerfield but within Doctor Who stories themselves. The relationship between Lilly and Matilda in Beachhead is sweet and unassuming, it adds a lovely layer to the story which would otherwise be Attack of the Voord. Although it doesn't feature enough, given they are cut off from each other for most of the story. It's dropped in as something perfectly natural and barely commented upon, just as it should be. Riding the TARDIS along the beach is a glorious idea, the Doctor, Liv and Helen facing a bumpy road as the ship is pushed turbulently into town. Another unexpected layer is the notion that we are returning to a location where the Doctor has visited in a previous life. Not a radical idea but one that gives the story some extra meaning because he has to face up to the consequences of his previous selves meddling.

Audio Landscape: Beach locations always give Big Finish plenty of opportunities for atmospherics and this is no different. Footsteps on gravel, truck, cash register, a river bursting its banks and swallowing a town, seagulls, bracing winds, water flooding into the TARDIS (Logopolis style), rain on a windscreen, cocking a gun, a helicopter screaming across the beach, rain dripping, orders over speakerphone, shots being fired.

Isn't it Odd: The Voord? Part of me says why not and part of me says why bother. They were such a dreadful, unconvincing species in The Keys of Marinus and despite Andrew Smith doing some sterling repair work on them in The Early Adventures I still cannot help but think it is a little desperate to cherry pick the real duffers from the Doctor Who menagerie. Certainly nothing is done here to convince me otherwise, there are no blinding revelations about the Voord that pushes them up the ranks. The reason the Voord are here on Earth is neither here nor there - it is the same old reason of their planet being dead and they need somewhere else to hang out. What is it about the Earth that makes it seems so viable to alien races? You would think they would check out how many times that sort of plan has been foiled and not bother. I think Big Finish should take a look at this habit of including naff old monsters just because. Recently The Wave of Destruction did something very similar. A fairly enjoyable story, taking a turn for the worse by a half assed invasion by a bottom tier monster. 'Someone or something has altered established history!' - must be Monday.

Standout Scene: The flood at the beginning of the story was unexpected and dramatic.

Result: Short, sweet and comfy. When was the last time we enjoyed a nice traditional Doctor Who adventure with the eighth Doctor? No, I can't remember either. Beachhead might be part of a large whole but it stands alone as a nice reminder of the types of stories that the Doctor universe excels at, an Earthbound location, a few reasonably well drawn characters and an alien plot. You're not going to find your world turning upside down when you listen but in a range that has favoured big, complicated arc storytelling over smaller, more intimate tales this is a quite a refreshment. A breather, let's say. and who do you turn to when you are looking for a good, old fashioned Doctor Who romp? Briggs is perfectly suited to this kind of story and delivers a really nice script with lots of opportunities for atmospherics. I always think he sees a story through a directors eye, even if this is one of the rare times when he is not taking on that job himself. Ken Bentley is the in-house director these days and he does a confident job with this. The plot is slight (so much so that the villains of the piece barely appear) and so the atmosphere and performances carry us through. Sometimes it is nice to just kick back and let Doctor Who give you a glorious massage without having to tax your brain too much...Beachhead is like your first round of therapy in a spa. I felt very comfortable listening to it. For once the fact that this is easy and unchallenging is a Godsend. Enjoy it while it lasts: 7/10

Domain of the Voord was by Andrew Smith, not Platt.

I thought I was the only one that found Nicola and Hattie's voices similar!
I agree with your review, I found the Voord dull and uninspiring, it seems like now big finish have finished plundering the Tom Baker era for villains (is there some baddie from that era that hasn't been reused??) now they turn to obscure Hartnell era monsters.
I think that the first homosexual reference was in the DWM comic strip and even before the new series started, RTD wrote to congratulate them, or at least it's what I read somewhere
Extrange that you didn't find a nickname or title name for this two companions in your reviews!

I was trying to work out why I enjoyed this one so much, sinse yes, it's a pretty bread and butter Who story, invading aliens without a planet to call their own, a lonely village in the south of England, an atmospheric location, a small cast of characters and baddies who can't be shot by bullets.

Then I realized why. There is just so much going on here. The Doctor with a mistake to fix from the past, and a serious one that cost a man his life and made a friend and a decent person into an imbittered woman, a flood that is a natural disaster with unforseen consequences, Liv showing her skills but also her being out of her time, Helen getting used to the idea of being in what is for the her the future. Even the police backup and anti alien task force are treated here as more than just generic cannon fodder to pump the aliens full of rubber bullets.

The Voord yes are rather generic, but at the same time there really wasn't muchs pace in this story for exploring an alien race sinse all the other factors were dealt with so nicely, including A genuinely sweet, under stated romance that makes it possible to have sympathy for both characters, hay Moffat, ever heard of a romance between people who like! each other?

This one absolutely flue by and made me feel wet and cold despite the fact that I was curled up with my beloved lady in bed on a sunny morning while listening. A break in the eleven saga? Perhaps, but a better executed break it's harder to imagine. if there is a perfect story that ticks all the boxes but still! manages to work like a well oiled machine, this is it, no surprises, just a masterfully crafted piece of drama and still proof that solid and dull are not the same thing.

It's not that the Voord are dreadful. it's the way Big Finish uses the Voord. This has actually been a problem with a lot of recent Big Finish audios. There's a monster from the Classic television series. Big Finish believe that the mere fact that they're using that monster must automatically result in their audio becoming a classic audio adventure. When really all they're doing is misusing that monster. How many Big Finish audios were sold on 'The Return of...', but ended up completely missing the point on what made the monster work in the first place?