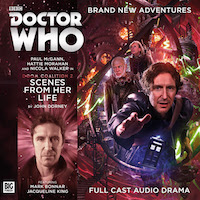 What's it about: Investigating the appearance of the Voord on Earth, the Doctor, Liv and Helen follow a trail which takes them to the other side of the universe. There they discover a mysterious and almost deserted gothic city lost in space and time, in which the grotesque inhabitants are conducting a vile and inhumane experiment. The Doctor and his companions must hurry to save the lives of those in danger before the experiment is a success and the unimaginable consequences become all too real.
Physician, Heal Thyself: 'He's a Doctor squared, he's like a Swiss army knife of sciences..' The Doctor seems more on a mission then ever. Fun time is over and he is back on the trail of the Eleven. Helen and Liv don't understand the vortex like the Doctor does and joining him would be inordinately rash. You know that isn't going to stop though, right? Gallifrey is so governed by law that it is practically blinded by them...why do you think he left in the first place?

Liv Chenka: A Doctor and she wont stand by and allow someone to suffer, even if they are integral part of this obscene set up. No matter what the situation is, Liv's humanity always seems to shine through very brightly. Liv practically enjoys turning the tables on Stormblood and Sepulchra, inciting revolution seems to be in her blood.

Helen Sinclair: Helen gets some useful development in this story because beyond the chemistry of the three regulars together I haven't seen any real need to keep her around. Especially when Liv performs the role of the Doctor's equal so well. There's further discussion of the casual sexism that Helen faced back home and how she was held because of her gender, even though she was much more capable than some of her male peers. There was so much wasted potential, potential that she can now fulfil in the TARDIS. With the Doctor, her strengths aren't feared, they are celebrated. How the story uses the link between Helen and Caleera as a plot point so she asks the Doctor to release her (with terrible consequences) is very smart.

Standout Performance: A Big Finish regular performer now, Jacqueline King scores one of her most memorable roles to date. Every time she appears I get a warm series four glow about me but it is her diversity and skill as an actress that always impresses me the most. Lady Sepulchra is a vile harpy, a sadistic queen of this ripped open TARDIS and King delights in taking her every vice and shoving it in your face.

Great Ideas: The Doctor is investigating the destruction of the Voord homeworld where there appears to be nothing left. And there are traces of artron energy in the debris suggesting the presence of a time machine. The time winds have stripped away the outer shell of this TARDIS and what is left is the labyrinth within hanging in space. If a TARDIS crashes into the interior dimensions of a TARDIS, is that still Time Ram? Huge credit to the writer, this is a spectacularly visual notion that could probably only be done in justice on audio where your imagination fills in most of the blanks. Even a full page comic strip panel couldn't fully realise the complexity and momentousness of such a concept. Like the Time War, seeing it would probably diminish it. They try on the cover but all we get is cogs and stairwells, probably the best you can hope for in an abstract kind of way. The Doctor states that the Cloister Bell is always just that little bit too late to be of any use. There's no way of telling how strong the force field holding the citadel together is, it could fall apart at any minute. Exposure to the vortex for too long will addled even a Time Lord's brain. Caleera was seen as a threat and was kept in check and held back by her peers. She's an exceptionally gifted psychic and she was responsible for the destruction of the Voord homeworld. Clearly the Eleven is something of a charmer, he played Caleera like a fine instrument, clearly only interested in her powers.

Audio Landscape: There's a subtle hint about what the citadel is very early in the story when a TARDIS food machine can be audibly heard dispensing a drink. The draining process, the TARDIS humming, electric crackling, whipping, hypnotic suggestion, tearing away a door, the winds of the vortex rushing in.

Standout Scene: The flashbacks to Caleera's time on Gallifrey before this story takes place were vital and gather momentum throughout. They provide the answers to the truth about the situation in a staggered way, rather than having a long flashback at the beginning of the tale or at the end. It's a lovely approach, providing an exciting feeling of being guided to the truth rather than having it handed to you all at once. I thought the title might be referring to the TARDIS, rather than a character inside it. When we realise who the true culprit is in this story these flashbacks are vital to providing a strong motivation.

Result: There is a frisson about this story, a feeling of excitement. It feels different. John Dorney sites Gormanghast as one of his inspirations despite never having read it before. He was aiming for the tone of the piece, that surreal, gothic, disquieting atmosphere. I got more of a sense of The Doctor's Wife from the early scenes, disturbed characters abusing other characters, a fantastic setting and a sense that something is very amiss. Given how The Doctor's Wife is basically TARDIS porn, this was quite an apt comparison. There is also a feeling of Paradise Towers about the story, of a complex infrastructure that has been perverted and left to rot and the inhabitants coping as best as they can with the mess. I like how the focus is much more on the situation playing out rather than seeing the story all from the point of view of the Doctor and his companions. It makes the central narrative feel more important than usual, more attention grabbing. Sometimes when a story plays out and it feels as though the Doctor isn't needed (Planet of the Ood for example) it is simply the writer failing to give him a central role. This isn't the case at all here, the Doctor is a vital component. He's just not the only vital component. These Doom Coalition tales seem very suited to their hour long format too, you can feel these puzzle pieces starting to come together to form a larger picture but each segment is proving delightful in it's own right. As a full length main range adventure the punchiness of this story would be stretched out and it would lose it's strength to knock you for six. At a pacy 60 minutes, Scenes From Her Life delivers a heady mix of high concept and strong character work. Never running out of steam, effortlessly slipping the Eleven back into the mix and reminding us again of what a strong TARDIS team this is, I wanted to applaud before the end. The last ten minutes are especially dramatic: 9/10
Posted by Doc Oho at 22:56

I found the characters of stormblood and lady sepulchra so irritating and annoying (he talked as if he had a sock on his mouth, and she... I couldn't believe she was Jacqueline King on the first place), so over the top and camp that almost put me off the story. But then, thr scenes on Gallifrey made me realise it was a reason they acted like that and despite they annoyed the hell out of me with that accents and speach patterns, I could enjoy the story. I like the chemistry between the 3 regulars and it was a relief for my ears to go to them and straighforward performances for once

I absolutely loved this one, particularly because it kept twsting my expectations. I initially expected a cdark, mystical gothic story, then something of corrupt science and dark images ala absolution, (which I enjoyed though I know many others didn't).
Then when I realized Caleera's importance, I thought it'd be a time paradox story with a trapped timelord, and only came to the origins later.

it's odd, there have been so many bf stories that swing round the mistique of the show in an attempt to go bigger and better they just become so full of crazy twists they bend under the weight of their own importance, renaesance of the Daleks, The next life, the chaos pool. Usually they get so busy pointing out that Smith the butler from the first story was really Presidence Borusa's tardis which was sent back to the dawn of time where it crossed wires with a dalek time ship from the chase that had just finished a mission in the 19th century retrieving a genetic template of a xygon duplicate from earth, which all crashed into the eye of harmony and became combined into the body of one man who mated with a chronovor, that they actually forget aboutt, ---- well telling a story :D.

So, I give this one huge amounts of credit for potentially having that sort of plot, with galifreya psychics, archives, time winds and lown up alien home worlds and yet never losing site of important things like character, indeed if this is the role Helen is going to play in the series, providing that human element then I'm all or her inclusion.

The only thing I did find a little off, is unless my memory of the first doom coalition series is incorrect, wasn't Caleera killed by the eleven shortly after she interviewed him? Or am I getting her confused with another character. This is the one problem with the mini series approach, especially with the more complex sagas, and one reason why listening again to several series on the trot is adviseable.

Either way though, a very, very awesome story with just the alien environment I like, some twists which didn't get out of hand and some amazingly good characters, plus more than enough darkness to make this one down right freaky.