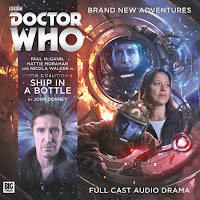 What’s it about: The Doctor, Liv and Helen are hurtling into a future that has been utterly destroyed, trapped inside a shuttle with no possible means of escape. But with the lives of everyone in the universe in the balance, they've got to find one. And soon. When the stakes are this high, you can't just give up. Or can you?

Physician, Heal Thyself: There’s been many a time when his survival has been dependant on a piece of fruit. He’s usually very good at spotting psychopaths so he’s astonished that he has missed all the signs in Padrac. The counters Helen and Liv’s accusations of abandonment with being insulted that they would run off with the Eleven, and how they could ever think that it was him. He is extremely rude to Helen when she was only trying to help and I feel that his apology is completely justified. The Doctor is in guilt mode once again, feeling as though everything is his fault. Ever since the Eleven escaped from Gallifrey he has been trying to hold back the tide of events but can see now that everything he has done since that day has helped Padrac with his plans. He looks back it his previous incarnation and sees nothing but hubris, the great manipulator and the master of chess but nowadays he feels as though he could barely win a game of snakes and ladders with his opponents. Just because he has managed to muddle through everything so far it doesn’t mean he always will. What he needs is for Liv and Helen to give a bloody good slap (metaphorical, of course) and to give him something to fight for again. The last time the Doctor was this without hope was when he lost Lucie and Alex at the end of series four. Live calls him fatalistic, and she’s not wrong. The Doctor is trying to prepare his companions for the worst, that there maybe nothing they can do to prevent the future dying, that they might not be able to save anybody this time. He’s prepared to go forward with only keeping the memory of those people they met in the future (when it still existed) alive, saving them in hat small way.

Liv Chenka: Liv finally gets the chance to tell the Doctor how angry she is that he abandoned them to swan off with River, despite the urgency of the situation. Since he abandoned her she has been attacked, knocked unconscious and now she is hurtling into a future that doesn’t exist. She very much holds him accountable for what has happened to her. She makes him insist that he will never do it again, and to admit that they are a team and they work better that way. It’s an astonishing scene that really drives home the connection between these people and how much it hurts when that connection is broken. I loved Liv’s sheer determination in refusing to give up and accept the situation. When even the Doctor is without hope, she fights and fights. She considers it is her duty to go back and save the future and everybody that was once alive, there isn’t a choice. As a Med-Tec, she’s seen people die, told grieving relative that there is nothing that can be done…she’s had plenty of life experience before she met the Doctor. She doesn’t give up until every option is exhausted…and the she keeps on trying.

Helen Sinclair: Helen is written very smartly in this adventure, asking some very pertinent questions and trying to remain positive in an impossible situation. It’s one of her best ever showings. Sometimes she feels redundant next to the Doctor and Liv, but Liv tells her she has more than proven herself already. The Doctor is the best man that Helen has ever known and she knows he will get them out of this, it might be blind faith but she has no doubt in her mind. There’s a beautiful moment when Helen comforts Liv with the knowledge that sometimes it is okay to let go of hope, recalling the death of her grandmother. It’s terribly sweet for her to use such a personal memory to make things easier for her friend.

Sparkling Dialogue: ‘We’re still travelling into a murdered future, only now we’re travelling into it gently.’
‘The universe is destroyed and its because of me.’
‘Believing is the first step in healing. Moving on.’

Great Ideas: I’m a bit on the fence about bottle episodes; sometimes they are beautifully done and give the regulars characters a real chance to shine without any outside interference from guest characters or moving to new locations beyond the normal sets. I particularly like bottle shows that primarily feature two characters and the time is used to explore that relationship in some depth (DS9’s Duet and Waltz are great examples). Other times they can be the most remarkably contrived situations in order for the show to save money. Clip shows are particularly loathsome (check out TNG’s Shades of Grey). To do a bottle show on audio is a ballsy thing given that there is an unlimited budget in the imagination and that the only justifiable reason to cut back so much is to give the characters a chance to breathe. Which Dorney succeeds in doing admirably here, given the regulars were somewhat at sea in the previous box set in such a violent and all-consuming narrative. This reminds me a little of the Stargate episode Unending, which also had the regulars in an impossible situation out of time and dealt with how they coped with the idea of never being able to escape. Except for Doctor Who a bottle show (well referenced in the title) is a rarity, and thus should be enjoyed as a novelty too. Outside the shuttle is dead space, Padrac has destroyed the future of the universe. Every single creature for the end of time has been destroyed. The Doctor, Live and Helen are trapped nowhere for an eternity. Let’s give John Dorney and Matt Fitton a round of applause for manipulating events so the fourth Doom Coalition set starts on such an ominous and memorable note. Padrac has been working with the Sonomancer and the Eleven and the Clocksmith…he’s been a busy boy. Helen asks a very good question; if the universe has been destroyed and the Doctor always says they cannot change what has happened…doesn’t mean that there is nothing to be done? The Doctor counters with the argument that since they have already been to the future and know it exists it suggests that this is the aberrant timeline. If you’re stuck in the middle of an ocean (the non-future) how do you get back to shore? You ride a wave (time winds in the vortex). Riding a shockwave back in time through the vortex. There is only one way to do that…blowing up the boat.

Isn’t it Odd: You do have to wonder why Padrac went to all the length of trapping the Doctor and his companions in the non-future when he could have just killed them. I guess that’s a Time Lord justice for you, shove them aside somewhere alive rather than getting his hands bloody.

Standout Scene: ‘Doctor, we’ve made our choice…’ After all the tension in this story you might think that things have been damaged beyond repair for this team. When it comes to the Doctor’s insane plan of escape, his two companions don’t doubt him for a moment. Ship in a Bottle has strengthened the faith they have in each other, not weakened it.

Result: Like the beginning of the previous set, this is an intimate character drama that kicks things off in memorable style. The one thing the Doctor, Liv and Helen have plenty of now is time and it is a chance for the three of them to have it out. After the tidal wave of plot from the previous three stories it is a huge relief to cut things back to just the three regulars and to deal with their reactions to everything that has been going on. John Dorney is scripting, and he isn’t afraid to push these characters into asking tough questions. What I found interesting was how much it exposed about the strength of the eighth Doctor, Liv and Helen as individual characters because this was the sort of economic storytelling that would reveal whether they were hollow or fully rounded people. A lesser set of regulars would flag in this type of story. Pleasingly, they all have solid reasons for being angry and frustrated with one another and it never once feels as though the tension is manufactured. Not only that it shines a new light on how much they need each other and how effective they work together. Doom Coalition might ultimately be another Doctor Who epic to end all epics, but it has brought together a wonderful TARDIS team. I’m so pleased that the personal consequences of this story are being dealt with (because they are so often ignored in Doctor Who) and that meaty acting opportunities are being handed out to the performers. The ‘escape the non-future’ plot is reasonable, but it’s the dialogue and performances that shine here. I felt this was getting back to what audio drama can really achieve; intimacy, emotion and meaning. The last ten minutes in particular are hugely uplifting and exciting, with a memorably ambiguous final scene. A huge thumbs up to Paul McGann, Nicola Walker and Hattie Morahan for tackling such a challenging script so skilfully. What a team: 9/10
Posted by Doc Oho at 03:29

I don't know if you read the comments but I'm very glad you're reviewing audio again!

Did you ever listen to the other episodes as I couldn't find your reviews?

Found them just weren't in the chronology bit