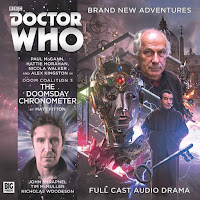 The Only Water in the Forest is the River: She considers herself a much better driver than the Doctor. River explains about the psychic wimpole, a device that allows him to see her with a different face so she doesn’t affect the timelines and her first meeting with him. It’s a really neat, simple idea that skips over any problems in continuity in a heartbeat and allows River to present with as many classic Doctors as Big Finish choose. Bravo. When she suggests that she will keep Leonardo Da Vinci busy I thought Fitton was taking a Moffat approach to over sexualising the character but amusingly he has her playing tiddlywinks with him instead. River suggests that she will train that high handedness out of him eventually. She would drop anything to save the universe with the Doctor and it does feel like the story has been geared to force the Doctor and River into a position where they do that alone together. It’s a positive way to end the story though, so I’m not complaining.

Standout Performance: I haven’t really commented much on Alex Kingston’s performance on audio. On the whole I think I prefer it to her work on the telly, although there were several River episodes that I enjoy a great deal. It’s interesting to see her in the hands on another writer and just how the smugness factor diminishes when Steven Moffat isn’t involved. During seasons six and seven she was creatively poisonous for the show (in my humble opinion) but in the Doom Coalition narrative her appearances are a highlight, which is quite a reversal of fate in this reviewer’s eyes. Kingston is a lot of fun on audio, and has a terrific rapport with all three of the regulars. River isn’t the be all and end all but a positive component in a larger story.

Sparkling Dialogue: ‘Honestly, Time Lords! You spend your whole life thinking that there is only one left and then they start turning up like buses!’
‘The question often asked of art! It is to provoke emotion! A response in those who gaze upon it. It will cause fear or terror!’

Great Ideas: The Clocksmith came to create a work of art so the universe will remember them. The religious sect believes the clock was broken apart in the 1400s, the pieces scattered throughout Europe. In 2016 someone is putting all the pieces back together again. All part from one, the eighth piece. I really enjoyed how the Doctor set up this entire mystery in the first place, it has a nice circular feel to the plotting to have the puzzle of the clock put together and then how the puzzle pieces came to be scattered explained. The clock is the Clocksmith’s small contribution to the cause, using a part of the first world demolished in their name (Syrah). Turning the ashes of a dead world into a souvenir. It’s a demonstration of everything the Coalition is out to achieve. The first mention of the Coalition…two thirds into the set! Talk about playing the long game. The clock forces co-ordinates into the Doctor’s head. There’s a secret group of Time Lords trying to harness a resonant power the like of which the cosmos has never seen. By calculating the time and place of the end of everything, the clock made it real. A trigger, a signal to the Coalition.

Isn’t it Odd: I’m reliably informed that reviewing this story and the previous one as two separate entities rather than taking them as a whole is pointless. So call me pointless. I did the same thing for Aliens of London and World War Three. My blog, my rules. Colour me pointless. There is a gripping Doctor Who story to be had featuring ThomasCromwell but swallowed up in the great Doom Coalition narrative, this is not it. He’s a useful plot device and has a few nice speeches, but as a historical figure he is chronically underserved because of the larger arc. In a moment of maddening obviousness, the revelation dawns on the Doctor that assembling the doomsday chronometer might not be the smartest of ideas. Given that its construction has been the focus of a pretty rum lot throughout history there is a remote chance that it might not be a product of benevolent design.

Standout Scene: Everything has been building to the clock being assembled and activated and so when that happens you start to hear the ticking, you cannot help but get excited at what could possibly be coming next. It measures Doomsday, what an exciting prospect. ‘I’ve never seen it…but this must be what happens when he regenerates!’ The cliff-hanger is as bold as it is nonsensical since we already know this isn’t the Doctor. Where on Earth do we go from here?

Result: Much more satisfying, but with the trade off once again being a weight of plot elements obscuring any chance of character development. The answers come thick and fast throughout and it’s possible to think of all this as entertaining exposition but given the denseness of the Doom Coalition arc it is a relief to see it starting to streamline and make sense. I really enjoyed how early instalments of the Doom Coalition series are brought up and have impact on the story. It feels less of a bunch of incoherent pieces but more like a slowly forming narrative. What The Doomsday Chronometer also has in spades is a snappy pace and a great sense of fun, I bounced from scene to scene enjoying the journey very much. You’ve got a likable cast of regulars bringing this story to life and whilst they aren’t being stretched in a great direction, they make the revelations that this story throws up an exciting experience. It’s huge ideas all the way from secret Time Lord groups up to nefarious activities to ashes of dead worlds being used to create a doomsday device; grandiose, exciting, and hugely over the top. Doctor Who melodrama at it’s most epic. The last fifteen minutes are desperately exciting as the clock is finally allowed to count down towards doomsday and everything leads towards an unforgettable cliff-hanger. I’m still very positive about this sixteen-part narrative, despite a few stumbles along the way. The batting average has been well above average and in parts, truly sublime. This instalment has the subtlety of a sledgehammer and the character development of a stone but it’s hugely engaging despite that and promises big things for the future. This energetic adventure more than makes up for the previous hiccup: 8/10
Posted by Doc Oho at 18:44

I knew when River was announced to work for the audios, she would come as a more interesting character. Moffat writting was too smug and over sexualized for its own good; I wonder what will happen if(when?) Amy Pond and the Eleventh Doctor era is done with Big Finish,will they make her likeable? Will they make Clara a person instead of a plot device?

With Amy it is complicated because she was damaged by a promise that took years to be fulfilled, even the Doctor told her that he ruined her childhood. His abrasive and bitter attitude is justified by that, and I liker her for that.