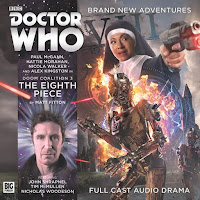 What’s it about: 15th Century Prague: in the castle dungeons, a prisoner raves about the end of the world. Outside, Liv Chenka seeks out the workshop of a strange Clockmaker to see what he is creating. England, 1538: Lord Thomas Cromwell finds his duties interrupted by otherworldly forces – clockwork soldiers, an unusual nun, and a mysterious scholar calling himself ‘the Doctor’. Perhaps the truth can be extracted in the torture chamber of London’s Bloody Tower? Rome, 2016: Helen Sinclair has an appointment with an enigmatic Professor, whose greatest work is almost complete. Only the Eighth Piece is missing…

Physician, Heal Thyself: Freedom and equality are his watchwords. Not much more to say here. The Doctor meets Cromwell in this story but there isn’t much of a sense of occasion because there is so much happening elsewhere.

Liv Chenka: She enjoys early 15th Century Prague because it feels alive, and after the relative slumber and introspection of the previous adventure I can understand why. This is exactly the sort of place to go to take your mind off of family tragedies.

Helen Sinclair: Very British, she’s taken aback by a continental kiss. Yep, that’s about it aside from a mention of her disreputable past. But she shrugs that off and says it’s a disgruntled aunt in question.

Standout Performance: It’s now been established that Alex Kingston has pleasing chemistry with both Nicola Walker and Hattie Morahan. So can we please give them a chance to stop dashing about and just talk.

The Only Water in the Forest is the River: A member of the clergy that fancies her fellow clergymen? Yeah, that sounds like River. She suggests she will repent later at leisure but I doubt that will happen.

Sparkling Dialogue: ‘Threads in the Web of Time are being unpicked by whatever this is. But only in relation to one another’ – no it’s not a great line by any standards…but nine stories in, we’re finally working towards some kind of a coalescence of plot.

Great Ideas: A raving madman from the past screaming prophecy that the end is coming…I thought I had wandered in to The Pandorica Opens for a second. How fun to yomp through history in search of components of the Doomsday Chronometer, it’s a loose technobabble conceit to give the show the chance to do what it does best, explore all of time and space. Or in this case, time and Earth. Justin Richards was the master of this kind of thing, the Doctor and his companions all in different times and places (see Time Zero and Sometime Never… for just a few examples) but working towards the same goal of putting together a puzzle. It’s not original, but it’s often fun. The Doctor wants to reassemble all the pieces under controlled conditions. The Solvers are living puzzle boxes with a hive mind. A collection of time pieces covering six centuries of European history. A time piece that measures the time we have left, knowledge enough to send men mad. Over time the Chronometers was assembled from eight separate larger pieces, a revered piece of work. The eighth piece remains lost.

Isn’t it Odd: I don’t pretend to be an expert in writing audio drama, but I have heard an awful lot of these now so I can only critique in relation to what works for me. Coherency is a vital consideration on audio because you are only working with sound. On television you have visual back up, but on audio if you have characters reacting to situations that aren’t adequately explained or characters in dialogue that you haven’t established well enough it is just audio waffle until the penny drops. Generally, in Doctor Who audios you have the Doctor there to provide a lot of the explanations and exposition or the companions asking the right questions to the guest characters to provide the answers the audience needs. The Eighth Piece commits the cardinal sin of setting up the story in the first five minutes and then spending ten minutes with characters we’ve never encountered before discussing and reacting to situations that have yet to be explained. As such my interest immediately started waning. I think if you are going to have a story which is set in several time zones with lots of events happening, immediately establish all three regulars in their appropriate time zones and have them reacting to the situations. When robots appeared, and started killing characters I hadn’t had the time to get to know or understand in a setting that hadn’t been adequately established, I was wondering why I was listening to this. When Helen and River showed up, I cheered but I think the appearance of companions should be celebrated because they are enjoyed in themselves rather than because the plot will finally make some sense. I guess the biggest comparison I can make is to Seasons of Fear in McGann’s second season, which also featured a waltz through history as the Doctor and his companion attempted to piece together a puzzle involving a man who is apparently immortal and some old monsters returning. Seasons had the Doctor and Charley visit each time period together, discuss the setting in some depth, make jokes, interact with characters, get into danger…it was all very engaging, informative and vividly described. I knew exactly where I was and it wasn’t at odds with telling a gripping puzzle piece. If the story is about the mystery of the eighth piece of the doomsday chronometer (as the title suggests), I would have gotten to the point a lot sooner. The entire story could have been about the Doctor, Liv, Helen and River hunting through time for the eighth piece…rather than spending an hour setting up the mystery that the eighth piece exists. There are essentially four regulars in this story (let’s include River even if it pains me to do so) who are all underserved (especially Helen) because the hour-long story is divided four ways.

Result: ‘Bumbling around time as though it’s a bric-a-brac shop!’ Diversity seems to be the keyword in the Doom Coalition set as an intimate, intense character drama is followed by a chaotic, sprawling time puzzle of a story. The Eighth Piece sets up an intriguing premise; hunting the pieces of an ominous time device through the earth’s timeline. But the emphasis is definitely on set up, with no resolutions and the debate rages on whether this should be considered a story in its own right or the first half of the story that concludes in The Doomsday Chronometer. Absent Friends essentially honed on the three regulars and studied them penetratingly, The Eighth Piece jettisons any hope of studying them in favour of dropping them off in separate time periods and swallowing them up in plot. I know which approach I prefer. I don’t mind plot heavy Doctor Who, but my method of surviving the rapids of the complex narrative is to grab the hand of the characters and experience it through their eyes. If the plot is simply a tidal wave that crashes into the regulars, I can’t keep hold of them and we’re both lost in its wake. The narrative is nowhere near as coherent as it needs to be, and it is still unclear how it fits into the overall Doom Coalition narrative. It’s starting to feel like The X-Files mythology, god knows what the overarching story is, but the individual elements are quite fun. Raving madmen, River Song nunning it up, living puzzle boxes, horsing about, a huge time piece collection, knowledge of the end of the world… Imagine each of these elements like rocks, constantly being added, but with nothing to carry them in. I was overwhelmed by ideas, incident and revelations, with no reason to care about them. Where is the Eleven? Why is River included if she has to be written out with magic wand technobabble? Who are the Doom Coalition? The narrative of the doomsday chronometer (the device, not this instalment) is assembled with great care, each piece given a story of its own. When a plot device is given such luxurious priority over any one of the characters that are trying to figure out it’s construction, I think the story needs a rethink: 4/10

I agree with the lack of coherence on this. Although to be fair, it still easier to understand (or at least to enjoy) compared to My Dinner with Andrew — two times relisten and I still can't wrapped my head around that. The bumbling wandering old man almost irritate me, yes it's finally reveal a quite good plot twist on who he really is, but it shouldn't rely on that for too long. I personally give this episode a 6/10.