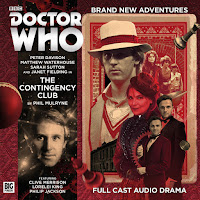 What’s it about: London, 1864 - where any gentleman befitting the title ‘gentleman’ belongs to a gentlemen’s club: The Reform, The Athenaeum, The Carlton, The Garrick… and, of course, The Contingency. Newly established in St James’, The Contingency has quickly become the most exclusive enclave in town. A refuge for men of politics, men of science, men of letters. A place to escape. A place to think. A place to be free. The first rule of the Contingency is to behave like a gentleman. The second is to pay no heed to its oddly identical servants. Or to the horror in its cellars. Or to the existence of the secret gallery on its upper floor… Rules that the Doctor, Adric, Nyssa and Tegan are all about to break.

An English Gentleman: It’s fascinating that the team of the fifth Doctor, Adric, Tegan and Nyssa should work together so well on audio given that they are literally a bunch of oddballs thrown together with no particular plan. All this clever-cleverness in the TARDIS, cries JNT, let’s bring in some kids. I know a cheeky artful dodger type, but with a maths degree. Wait, that cute little girl on Traken was rather lovely, let’s add her to the mix. How about a really mouthy Australian with an obsession with Heathrow airport? And for good measure let’s throw in that charming fella from All Creatures, barely out of the cradle and shove him in some cricket gear. Looking at these four characters objectively they are utterly disparate and have no right appearing in the same TV show together at all, let alone functioning as the audience identification figures. On screen the actors are often awkward in the barely fleshed out characters and there is no real sense of developing relationships or a decent motive of why they travel together. It’s kind of just because they’re stuck together. And yet for a large section of fandom they sum up a particular period of Doctor Who (let’s call it TARD-Enders) and their coming together marks a pivotal point, where Tom Baker left the show and there was a seasons worth of grace as the audience checked out the ‘dynamic’ new team. When it appeared that both Matthew Waterhouse and Janet Fielding wouldn’t return to Doctor Who on audio is was long feared (or possibly rejoiced) that this team would never get to enjoy the same sort of renaissance as the sixth Doctor and Peri and the seventh Doctor and Mel (it’s funny how only the 80s companions need some kind of renaissance, isn’t it?). Until one fateful day the stars aligned and all the cattiness apparent on the DVD commentaries between Davison, Waterhouse, Fielding and Sutton transferred to the Big Finish studios for the Fifth Doctor Boxset (featuring Psychodrome and Iterations of I). Horror of horrors, the team was back together. I was agog when I heard the results; the only time in memory when I have given 10/10 to an entire boxset, a pair of stories that plays to every one of their strengths, a relaxed set of performances (that can only come from a lifetime of these actors forging relationships at conventions) and a longing for further stories with these characters. And here we are; the first trilogy for the fifth Doctor, Adric, Tegan and Nyssa. What does this have to do with The Contingency Club? Like The Star Men before it, the writer captures a distinctive voice for each of them and pairs them off in very entertaining ways. These aren’t characters that work together naturally, I explained that upthread, you have to put some work into capitalising on their individual strengths and weaknesses and Mulryne has done a fine job of that. The story here is okay, but his work with the regulars is exceptional. It’s another winner for this team, which so far has not dropped the ball once.

Hilariously the Doctor states that they have tried and failed to get to Heathrow once too often, hopefully putting an end to that bloody airport being mentioned in every season 19 Big Finish story. Even more joyfully he wonders if there is some influence that is deliberately keeping them away. You can hear Gary Russell writing the proposal for that continuity gap as I type. Sometimes he feels his three companions could all do with a headmaster and he tries to fill that role, but the fact that he looks younger than his oldest companion works against him.

Maths Nerd: ‘Some teenager you are!’ cries Tegan, baulking at the idea that Adric never enjoyed music when he was a teenager, instead choosing the symphony of numbers. I bet he never played with himself, either. He’s trying to fit in with these meddlesome girls but he can’t seem to grasp their language, especially when they refuse to accept how superior his intellect is.

Mouth on Legs: Tegan’s Walkman dates her wonderfully, especially how proud she is of it. She gets off her best cutting remark about the TARDIS yet, comparing it unfavourably to a personal stereo. A gentleman’s club that refuses women admittance being ruled by a Queen…imagine Tegan’s delight. Setting explosives next to Tegan is a fruitless exercise, she detonates with far more ferocity than any dynamite ever could.

Standout Performance: What has happened to me? I just love Janet Fielding’s Tegan these days. Fielding isn’t fighting a caricature, as she often was on television but embracing a character, and playing it warmth and humour. Fielding has become one of my favourite Big Finish performers. She made me laugh out loud twice in several minutes in the first episode. I never, ever laughed at Tegan on the television. I was too busy trying to think of ways to dismember her. Lorelei King’s performance is interesting because she gives the Red Queen all the ham and hokey of a Doctor Who villain, and yet she turns out to be anything but. It’s rather misleading to be expect a climactic showdown with a character who has been behaving like she’s going to tear down the universe as an amusing after party game only to be told that she’s just a regular Josephine enjoying a spot of entertainment. She even has lines like ‘The end game is in motion!’

Sparkling Dialogue: ‘Oh dear me, no! A club is a place secure from women!’ is a line spoken to Tegan. Someone should have warned him…

Great Ideas: The Contingency Club is newly established in London but has quickly become the most exclusive enclave. Men of learning are flocking there and the other clubs in town are losing their most respected members to new venue. It takes Nyssa two episodes to figure out the identical Edwards are clones (even Adric takes the mickey that she felt the need to spell it out). I enjoyed the discussion of the Underground, which grounds the story in a particular time period, and the scene where Adric reacts at how primitive the building of the tunnels is. The Club is much bigger on the outside, its hiding a club within the club, a hidden chamber where the Red Queen hides. She’s plotting to put explosives underneath key points in London in order to force Queen Victoria to kneel before her. It’s one big chess game with the Red Queen trying to take the White Queen. That’s quite a fun notion, but I don’t think the story is anywhere near tightly plotted enough to justify the reveal. The Contingency family are a race of game players who have played on several worlds in their time. The wager here was that the game could not be won without superior technology, hence the steampunk tech that was featured in the story.

Isn’t it Odd: After listening to episode one, would you choose to listen to more of this story if it featured a less engaging set of regulars? Me neither. It’s the opposite of The Star Men which practically packed the events of a two-hour story into half an hour, literally nothing happens in episode one beyond the Doctor and friends reaching the Club in the title. In storytelling terms, this is an opening instalment that is entirely lacking in interest. Simply because there is no story come the first cliff-hanger. The first piece of truly useful information about the plot comes 34 minutes into the story where the Doctor is finally given some information about the Club. In New Series terms, that information would be offered in the first five minutes of the story. I know classic Who could be quite ponderous at times but it was always good at setting up the story before the running around. Having the characters dash about without notion of where they are or what is going on is a little unusual, to say the least. At the end of episode two where all the Edwards start waking up, it’s sold as a moment of jeopardy but there is no reason for us to consider it so because they haven’t acted dangerously. The story makes an assumption that they are dangerous simply because they are the one science fiction element in an otherwise ordinary story. Isn’t the Toymaker the ultimate Doctor Who villain who plays games? Did anybody think that Tegan's tape player wouldn't play some part in the climax?

Result: Like the Star Men, I want to like this more than I did. Immediately it has two elements going for it; four well defined regulars and atmospheric direction by Barnaby Edwards. Ultimately that was all it had going for it and by the time I had finished I wondered why I had committed two hours of my life to this tale when it had a plot that would barely fill one. If you enjoy endless scenes of the Doctor and companions being split up, running around and getting excitable as they piece together a very thin mystery, knock yourself out. That might sound like the recipe for many a Doctor Who story but in most cases I couldn’t excise the first 50% without doing a great deal of harm to the story. You could easily do that with The Contingency Club. The Contingency Club is a collection of pleasurable ideas (the Russian Doll Club setting, the surreal nature of the Edwards clones, the game that is being played out) that I think would have made a cracking new series adventure but stretched out to the length of a classic Who it struggles to find enough substance to justify its length. Fortunately, we have the fifth Doctor (a gentleman for a gentleman’s club), Tegan (good humoured, even when facing the sexism of the time), Adric (offering a brilliantly bitchy commentary on everything) and Nyssa (whose biology skills are put to good use) to help pass the time. They are a lot fun to be around, and salvage a lot of the aimlessness. Peter Davison and Janet Fielding, in particular, are great. There was a chance to explore class, sexism, politics and all manner of significant topics within the setting of a gentleman’s club but this Doctor Who adventures ducks any chance of shades of grey and settles on being an entertaining romp and nothing more. I like entertaining romps, but when you have a locale that offers so much more it does feel a little wasteful. I didn’t even get much of a sense of the atmosphere of a gentleman’s club, not like the cover suggests we would. Phantasmagoria did a much better job of that. Fun, entirely throwaway, protracted filler: 6/10
Posted by Doc Oho at 11:07

I see Tegan has grown on you a lot since Cobwebs. I find her on audio hilarious and very enoyable, unlike her TV persona