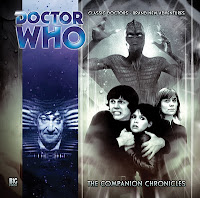 What’s it about: Zoe Heriot has a photographic memory. Totall recall. But when it comes to the years she spent travelling in time and space, all she can remember is that she ahs forgotten. Years after she was returned to the Wheel in Space by the Time Lords, Zoe meets Ali, a young woman who claims to have met Zoe before, when she was with the Doctor and Jamie. Suddenly, part of the hidden past is exposed, as memories return of a visit to the Whitaker Institute in Central Australia. Secrets are uncovered. And the mystery of the Achromatics is about to be unleashed…

Brains’n’Beauty: Jamie and Zoe losing their memories at the end of The War Games is one of the most heartbreaking twists of fate for any character in Doctor Who and only topped when Russell T Davies nabbed the idea for Donna at the climax of Journey’s End. Nobody has ever thought of what would happen if somebody from their adventures together met Zoe after her mind was wiped and it is a premise ripe for some dramatic material in a companion chronicle. Unfortunately it is used as a framing device only so we never get to truly explore the potential of this premise.

She has dreamt that she has travelled with the Doctor, visited amazing places fought terrifying monsters but she never left with him and it is one of the biggest regrets. Zoe has long had a sense of loss in her life, something that she had that has gone. It niggles at her because she has near perfect memory and if there are flaws it in she should remember them as well. When she thinks of the Doctor there is a jolt in her memory like a skipped track – nothing that you would notice but it is there. I like the observation that the story has to start at the beginning, at when she arrived, for it to make any logical sense to Zoe. The curse of the child prodigy is that you have the brains of an adult but the needs of a child…but Zoe never felt that she was missing anything. Zoe has had a complete education and read Wilde’s complete works in a day when she was eight which is easy when you have an eidetic memory.

Oh My Giddy Aunt: You can just imagine the Doctor marching into the control room and faking a surprise inspection to get himself out of trouble. Just think of The War Games episode two!

Who’s the Yahoos: Jamie has been trying to teach Zoe how to make haggis and he tells her that the clan McCrimmon has been making the stuff for hundreds of years! Jamie’s department seems to be to punch out whatever gets in their way and he has a particular fetish for wearing guards’ uniforms!

Standout Performance: Wendy Padbury fails to approach the material with any drive and as such it is quite a chore to sit through. The best narrators – Peter Purves, William Russell, Jean Marsh – all give very energetic performances and make the exciting moments count but there is one tone to Padbury’s voice through which doesn’t enhance the already monotonous story and fails to register with the hyperactive little genius we saw in season six. Still her Scots accent is gorgeous.

Sparkling Dialogue: ‘I remember that I don’t remember…’

Great Ideas: A facility that houses critically ill patients that have all been cured reminded me very strongly of New Earth but considering how little I thought of that episode this had to use the idea more fulfillingly. Where has this panacea of prodigious proportions come from? A creature which sucks out disease and injury is a great (if not original) idea. It takes illness, disease and even age and leaves you fit and young again. 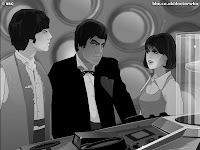 The creatures absorb all the sickness and take it take on the diseases themselves – their creators figure since they were dying anyway they may as well have some use to them. I love the idea of the Achromatics killing each other, drawing the life out of one another in a chain. The reason for the subterfuge in trying to convince Zoe to remember the details of this particular adventure is because they want to use the details of the Achromatics as healers but Zoe suspects it might be because they wanted them as weapons.

Isn’t it Odd: The first episode is a very quiet piece and after throwing the intriguing idea of Zoe meeting up with somebody from her past that she met with the Doctor we head into an uneventful and dull memory that suggests interesting things like the cure-all but seems trapped in the conventions of the time (run away/get captured). It’s a common problem in science fiction and please don’t think that I am suggesting that any ideas have been borrowed by The X-Files dealt with a creature that could suck out all know diseases too and I have to say it was in a far more dramatic fashion. It was also told in flashback and we learn that Mulder was dying and he is shot halfway through the episode and the creature brings him back to life and removes his illness by ingesting him and vomiting him back up. Gross, but its really effectively done. Echoes of Grey could have done with something shocking like that to give it a kick – imagine Jamie getting into a scuffle and being stabbed, near to death… It turns out that Ali was never part of the story – just the parts that she recounted but rather than execute this as a surprise ending the director chooses to make sound as throwaway and conversational as possible which blunts any impact it might have had.

Standout Scene: For Zoe to refuse their offer of potentially regaining her entire memory through the Achromatics to save them from exploitation is a very brave thing to do. Its probably worth coming back to explore this at some point.

Result: I didn’t know what to expect from Echoes of Grey but I certainly didn’t expect the first episode to be so…lacking. After John Dorney’s superlative Solitaire I was expecting more mystery and amazing interplay (those were the things that made his debut story so memorable) but there was just a gaping hole where that should be. Why is it that the Troughton companion chronicles lack the immediacy and interest of the other eras? Its not just the slack pace either, the direction is flat and uninteresting with sparse sound design and Wendy Padbury’s performance whilst adequate is nothing to shout home about. The cliffhanger is just about the dullest in memory with no real build up and it is edited as if any old moment was chosen to split the story in two. Rather than the snapshot of an adventure with the Doctor, Jamie and Zoe I think I would have preferred to have hung out with Zoe in contemporary times and see what her life is made of. For a story with such a dramatic idea at its core it isn’t applied to any of the regulars, they merely comment on the apallingness of it and so it is hard to connect with the drama. A very disappointing release which saves its most interesting moment for the last scene but unfortunately by then it is too little too late: 3/10
Posted by Doc Oho at 05:39

Wow, amazing to find that there's actually a story that you didn't like and that its actually one of the best ones. I'm a little confused about your criticisms of Padbury. She's great in this one but her Scots which you praise doesn't sound like Hines at all. Loved this story and am looking forward to the rest in this series.

I completely disagree with your assertion that this story is one of the best, and that there are so few stories that I don't like. If you take the time to peruse the site a little more you will discover that it there is plenty that I find lacking. Remember it is just an opinion, and not holy writ.