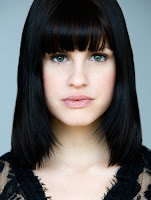 What’s it about: TARDIS travel opens one's eyes to a universe of possibilities, reckons the Doctor. For geek girl Izzy, it's also a fantastic way to track down ultra-rare back copies of 'Aggrotron!', the most dangerous comic in history…

Breathless Romantic: The Doctor is appalled at the comics that Izzy is reading because it seems to be page upon page of mindless violence (‘its got subtext!’ she argues). Looks like pear drops are the sweetie of this Doctor of choice, that or rhubarb and custards.

Geeky Chick: I came to Doctor Who comics really late and as a result of reviewing the novels of all things. I have been buying Doctor Who Magazine since the beginning of time and have a pile a stack high but the one area of the magazine that I never explored was the comics. It didn’t matter if a spooky or epic image caught my eye, it didn’t matter that it was in bold black and white or bursting with colour…it didn’t even matter that it was the continuing adventures of the eighth Doctor whose adventures in print were amazing me at the time. I just couldn’t see the point in telling a story through still images and in about 7 pages. Silly, silly Joe. In one of my reviews I started dismissing the comics and was brought up short by several fans of the medium who encouraged me to buy the first eighth Doctor collection and make up my mind. Oh my, did I have egg on my face. A whole new world of Doctor Who opened up for me and it was one that could be budgetless and ambitious but also intimate character drama. Izzy was my first comic book companion and I followed all of her adventures in just over a month, lapping up her transformation into a giant fish and loving her slowly burgeoning sexuality and independence. She was feisty and yet considered and she always had a geeky reference to hand for whatever the situation needed.

Izzy did not choose a student loan, friends that leech of you and the general pants lifestyle of going to university, she decided to stay in Stockbridge with Sandra and Les at the back of the Redfern Inn. She chose to go with the Doctor in the TARDIS even though it doesn’t have a holodeck but beggars can’t be choosers. When told that the TARDIS library contains some of the greats including J.K Rowling she answers ‘who?’ The Doctor wants to know that Izzy is using her adventures in the TARDIS for something more than picking up back issues of a comic! She has a portfolio with her (‘just doodles really’) which she takes on her adventures just in case. When discovering the awful secret that the Court Master is a girl Izzy remembers that she had a secret mistress called Eugenia and it is confusing. Hints of Izzy’s bi sexuality coming to the fore.

Standout Performance: When people said that Jemima Rooper was not their ideal sounding Izzy I wondered just how short of the mark Big Finish could have been. Pretty far as it turns out. The characterisation here is spot on and exactly what I would expect by one of the longest contributors to the strip when Izzy was on board but Rooper has a way of taking fun dialogue and making it sound…annoying. Rather than one of those cute geeks that you desperately want to hang around with she sounds like one of those swotty nerds that obnoxiously always thinks that she is right and you want to get as far away as possible. It makes the Doctor seem like he has lost all sense of character judgement – this version of Izzy is like the female version of Adric, a thought so horrifying that its barely worth pondering on. This is the only duo on this release that I wouldn’t want to see go any further. I really feel that Rooper would great as the character. When she laughs manically over a copy of a fable comic she sounds like a genuine facist dictator rather than an impersonator of one and then sounds like a throaty voiced adult when she impatiently waits for the Doctor to bribe the newsagent rather than an expectant teen. This is woeful miscasting.

Sparkling Dialogue: ‘My name’s Izzy and I chose the Doctor!’
‘The punishment is infinite death!’
‘Court Master Cruel was a girl?’
‘I shall return!’

Great Ideas: I loved how the script contains little asterisks ala the comics referring to older issues. The court room is powered by a miniature black hole and when it is collapsed it becomes an eternal prison for the accused and the judge and he has the pleasure of killing him a million times over. Apparently ‘GREAT NEWS KIDS!’ are the three words that every kid dreads on the cover of a comic because it means the merging of two characters that have existed separately (and the kids who argue 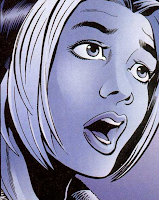 which is better like it that way) are being brought together. All the artists for the comic that Izzy seeks are aliens and they all have simple names – only idiotic humans thing that all aliens have names that her full of aggressive sounding consonants. In the 51st Century law and order collapsed and somebody had to wield the iron rod of justice and Aggrotron collector Derek became him and soon put the wind up the criminal classes. When he saw the issue that revealed the Court Master’s identity he knew he could not stop until every single issue had been eliminated. She was a girl and girls don’t belong in boys comics…it’s the law!

Audio Landscape: Crows, glass smashing, the busy smoking office of a comic (with sweaty old men coughing through the smoke),

Musical Cues: There’s a lovely sting of the Next Generation theme tune as Izzy recalls watching the series on VHS over and over again.

Result: A brilliant conceit, bringing a comic book character to life in a story that is about comic book characters coming to life, and another fun, enjoyable tale. What makes this the weakest story of the collection is the unfortunate casting choice of Jemima Rooper to play Izzy because she fails to capture any of the characters magic and for the most part sounds more like an adult pretending to be a teenager (ala Sophie Aldred’s Ace these days) rather than an ebullient teen time traveller in her own right. In exactly the same way that Matt di Angelo managed to embody everything that was delirious about Fitz, Rooper lacks the energy, shy confidence and adolescent geekiness that made Izzy such a joy. Barnes has written an imaginative little nit of nonsense that could have been one of the DWM one part specials and packed in some lovely touches (the asterisks) and so its still worth a listen but every time Rooper opened her mouth I thought ‘this is wrong’: 5/10
Posted by Doc Oho at 08:56

Review totally spot on! I couldn't agree more...
Izzy was one of my fav 8th doc companions and I love the comics to bits, but she sounds awful! she sounds bossy, hysterical, like a 7-year-old spoiled brat.
The Izzy in the comics is amusing, likeable, smart... but as you say, Rooper is wrong

They are going to start making adaptations of the comics soon. This could be their chance to do Izzy propurly