And so our journey begins with a mysterious school pupil who intruigues her teachers Ian and Barbara and leads them to a junkyard where a police box hums with life and a universe of adventures begins... In its opening year we experience cavemen, Daleks, the TARDIS on the brink of destuction, Marco Polo on his journey, the sinister Voord, bloodthirsty Aztecs, gentle Sensorites and face the chop in the French Revolution! 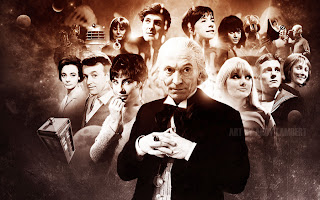 Result: A little piece of history and for the most part The Daleks more than lives up to its grand reputation. As our first step onto an alien world it really sells this series as something totally alien and mysterious, not to mention exciting and full of dangers. The Daleks bucks the trend of season one that it is the historical adventures that are the best realised and most memorable because this is one planet you will not forget in a hurry. The series certainly never did. The Daleks themselves are imaginatively shot throughout, devious, implacable and deadly and it’s no wonder they were an instant hit. This is a stage of the show where the Doctor wasn’t quite the hero and the companions had an equal share of the action with Ian, Barbara and (surprisingly) Susan all contributing memorable moments. A quick mention for the two directors, Barry and Martin, who keep this story moving and dazzling us with some imaginative and gorgeous lit images. Barry would go on to do better things with Doctor Who but this is Martin's best work on the series by a country mile. If this had been six episodes and we cut out the penultimate episode of padding it would be virtually flawless demonstration of how gripping the series could be when it took flight to another planet: 9/10

Result: The Keys of Marinus would have made a far better four parter since the first two episodes set up the story quite nicely and the last two episodes are the most interesting but the middle episodes are overlong, amateurish and stretch the budget far beyond its limits. Terry Nation’s second script lacks the subtlety and tension of his debut and puts the characters in continual moments of false tension that after a couple of set pieces you know they will escape at the last minute. This is Doctor Who so there are always moments to cherish, be they intentional or unintentional and this story has plenty of both. I would have loved to have seen this story produced as a movie as was suggested in the sixties because hacked to pieces to halve its length, shot on film with endless resources and injected with some pace and dynamism this could be a fantastically engaging piece of action adventure. Asking for a location hopping adventure that explores a myriad of settings across an entire planet in Lime Grove Studios is massive ask and whilst the designer tried to keep up with Nation's demands the director isn't giving this the same sort of thought and care that was lavished on the shows first science fiction tale. I have heard it suggested that the show belongs to Ian and Barbara at this early stage (because they are our identity figures) but losing William Hartnell for two episodes handicaps the production beyond repair and it is clear he has already made a huge impact. Fun to watch as hokey slice of sixties nonsense but lacking substance and sparkle and at times it feels like it isn't being taken entirely seriously: 5/10

The Aztecs written by John Lucarotti and directed by John Crockett

Result: A wonderful example of why the show took off so spectacularly in its first year, The Aztecs is imbued with confidence and style and is beautifully written and performed. The story boasts excellent production values from the detailed set design, the marvellous costumes and gorgeous backdrops to the evocative musical score. The Aztec culture is explored in considerable depth for what is essentially an adventure show and there are numerous character pairings that really set the screen on fire (Barbara and Tlotoxl, Ian and Ixta and the Doctor and Cameca). I remember first buying this on VHS and resenting having to add some creaky old black and white nonsense to my collection to complete it. Imagine my surprise when I was absorbed into a skilful morality play and absolutely fell in love with the atmosphere of black and white television. You have to single out Jacqueline Hill as being particularly exceptional in this tale because it gives her so much to work with but the truth is she always approached the role with this much conviction. A fantastic actress, and finally given material that can really stretch her and give the character a new direction to explore. Hartnell is on fine form too, indulging in a witty romance but proving startlingly vicious when he needs to be. Some stories are great to go back and re-watch because of the nostalgia value, but The Aztecs is one black and white story that is worth re-visiting because it is a genuinely fine piece of work. Get to it: 9/10

Result: Such an odd story in that all the essential ingredients seem to be spot on – an intriguing set up, strong characterisation of the Doctor and Susan, a charming and effective alien race and even a pleasingly explained conclusion – but much of it seems to be lost in the awkward execution and elongated running time. You might think it is quite churlish to criticise the direction of this story so damningly considering the circumstances under which this was made but I would argue that if stories like The Daleks, The Rescue, The Daleks’ Masterplan and The Ark from the same era can whip up a science fiction tale quite so smoothly and with such visual appeal then there is no reason that a story like The Sensorites can’t too. It all comes down to the talent of the individual director and not the archaic production values of the time. The first two episodes are trying hard to be cutting edge science fiction but play out rather like an under rehearsed theatre production and yet weirdly in all the static visuals and performance fluffs there are still moments of intensity and effectiveness (especially that cliffhanger). If the opening instalments are your typical Doctor Who with a tense atmosphere of terror and claustrophobia (or at least that is the idea) then the remaining show is more akin to Star Trek with an alien race being humanised and the show boiling down to a talky discourse on politics, space plagues and xenophobia. I’m not sure that we needed quite so many episodes of the Sensorites squabbling with each other (this would have made a much more enjoyable and tighter four parter) but they are quite an agreeably executed alien race for the most part and the show doesn’t lose any dignity for having introduced them (unlike say the Moroks or the Monoids from the same era). It all feels rather primitive and dated in a way that the best of the first season never does but for all its faults (which are manifold and listed above) The Sensorites does have a certain creaky charm about it and features a stellar (if occasionally fluffed) turn from William Hartnell who is always worth watching: 5/10

Result: An enjoyable foray into the French Revolution, albeit one that would have had much more impact as a tightened up four part story. The first episode is genuinely exciting and packed full of shocking incident but after that things do slow down a little, content on exploring the innards of the political situation whilst indulging in several episodes of escape/capture antics. Fortunately this story features the original TARDIS crew and so, Susan aside, there is a great deal of entertainment to be had watching the Doctor affecting a pompous disguise, Ian sniffing out a traitor and Barbara barely escaping the guillotine and being seduced. The production is sound with some detailed sets and a memorable score and Spooner turns every one of his characters into real people with some cutting and amusing dialogue. Pacing is in issue as the story progresses though. As fun and as charming as his exploits might be on the way to Paris, had the Doctor wound up there in episode one the whole story would have wrapped up a lot quicker. Once the plot has been all but tied up and we have reached the final episode it is basically a half hour long sitcom sketch with Napoleon visiting a tavern which feels like something of an anti-climax after what has come before (although it is the first example of the historical celebrity in Doctor Who). My biggest gripe (as ever) is Susan who is about as useful as a cat flap on a submarine, screaming and wailing an sniffling her way through the story and failing to contribute anything useful. Her cards are officially marked. Like many a classic Doctor Who story it could do with its flabby bits cut aside to shape into a more dynamic, substantial piece but if you watch this in two episodes chunks you'll probably come away thinking you have seen a reasonably accomplished slice of drama. One of the weaker historical stories in my book but considering my passion for them that isn't exactly a criticism as this still has much to recommend it. I would rather watch the efforts of Spooner than some of the creaky SF polluting much of the next season, although he does a much better job of handling this genre of Who next year in The Romans and The Time Meddler: 7/10

Oh Brilliant: Hold the Phone! I have heard people saying that they are waiting for the episode where Whittaker truly gets to embrace the ... 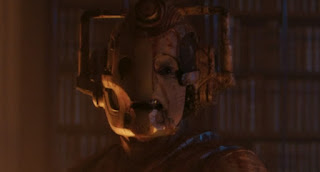