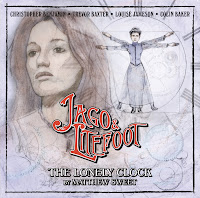 What’s it about: The enemy is revealed and Jago and Litefoot are on a train to nowhere. Can Leela and Ellie save them, in a race against the clock?

Theatrical Fellow: Matthew Sweet is less interested in exploiting the treasures of warmth and friendship that can be found in any scene between Jago & Litefoot and more willing to show the two of them as a resourceful team trying to solve a mystery. After John Dorney aced the witty raconteur and chemistry they have it is a pleasing change to see them portrayed slightly off kilter, disturbed by the strangeness of the situation they have found themselves in. It reminds me of how the warm relationship between the sixth Doctor and Evelyn was portrayed in The Nowhere Place, it felt as though everything had been turned on its head and the two of them were really haunted by events. Its experiments of character like this that keep a series being renewed. He’s not sure how much phantasmagoria he can take in one night! Once he has an idea in his head he wont be dissuaded, you might as well tell the dog not to chew your slippers! Jago is unimpressed when the Doctor mentions that he almost died on stage at his theatre during the events of The Talons of Weng-Chiang…especially since most of his acts can make that claim!

Posh Professor: Watching the Professor show off his craft in the field of pathology is as fascinating to Jago as it is to me.

Noble Savage: I wouldn’t want to be around when Leela calls time in the pub and I certainly wouldn’t argue with her no matter how many pints I had downed! ‘Listen you pack of worthless stinking drink soaked swamp pigs’ indeed! Through her perceptible reading of body language she can tell that Winnie has murdered her betrothed this very night. In a very dramatic moment Leela tells Winnie that murdering her boyfriend is an insignificant act in the war that they are currently fighting and you get the sense of how this noble savage sees the world for a moment. When the murder of a man can pale into disinterest she is working with a very different morality than you or I. I felt as though she was some kind of anachronistic elemental at that moment, seeing the bigger picture and final result rather than the homicidal detail that colours the story on the way. The three woman strong team of Leela, Ellie and Winnie is a real finger in the eye for the misogynists of the time – they make a very effective unit and each has a strong personality in a very different way. ‘If they get the vote I’m immigrating!’ Her warmth towards the Doctor is delightful to bask in and left me thinking there were definite possibilities with the Sixie/Leela combination. 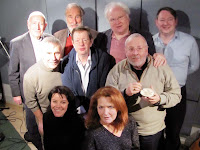 Dark Doctor?: My one complaint about this season would be the promise of some tasty Colin Baker action in Victorian London and singularly failing to deliver on it. They were just saving the best for last and he makes a stunning reappearance at the end of this tale ready to step into the spotlight for the finale. A woman plucked out of time and sent hurtling towards herself with a rackety little time device on her person…it was all a trap to force the Doctor out of the shadows to play his hand. He knows that Jago & Litefoot will not flinch in the face of ghastly danger and Leela is the bravest woman he has ever known.

Standout Performance: This is Louise Jameson’s vehicle of the season and she acquits herself with her usual accomplishment. I could happily listen to Jameson reading out my shopping list if she approached the material with the same enthusiasm, passion and intensity that she does here.

Sparkling Dialogue: ‘Pouring firewater is hardly the test of the Horda!’ – I love the way Leela describes mundanely things in such an animalistic fashion!
‘That’ll be us…bovrilised!’ ‘I’m not sure if the physical sciences allow for that possibility, old chap!’
‘In my younger days I once did a spot at the Glasgow Empire and if I can get out of that alive I can get out of anything!’
‘We are very nearly at our destination…’

Great Ideas: I like the fact that story gets us off on the wrong foot straight away, there’s no introductory perambulations between Jago & Litefoot. We immediately figure there is something very wrong as they wake up on a train which has stopped moving and been plunged into darkness. That’s an object lesson in getting your audiences attention. Using the darkness to force the intrepid investigators to describe everything to us is a clever device I haven’t seen used on audio in many a year. A business card made out of glass…classy! Figures standing on a train platform, frozen and drenched in shadows…we’re really straying into Sapphire and Steel territory here and so much the better for it. Sweet cleverly opens the story by showing us the result of what will happen to Ellie and Leela from Jago & Litefoot’s POV and then taking us back into the past to watch the events unfold that will lead there. Not a new approach to generating tension but always an effective one. A window that can heal over after being smashed like a cauterising wound. The Kempston/Hardwick calling card is a nice device to signal victims of Claudius Dark’s foes. Missing hours being returned to Jago and Litefoot and told through the simple but powerful image of a pocket watch dashing backwards in time. Sandy was a charmer who made it in the diamond field and he met Winnie whilst staying in a suite in Claridges and she was robbing it. Winnie’s clock is a time cracker, it creates spatio temporal discontinuities and can only reach back four epistopic intervals – I’ve heard some technobabble in my life (I’m reviewing Star Trek for goodness sake) but that’s a mouthful even for me! Its very funny how Leela is similarly mystified…as is Winnie and they came from her mouth! All of this complicated plotting and clever concepts starts to converge with the appearance of Hardwick and you get that lovely feeling that the story and the season are about to get a heft kick of momentum to lead into the final adventure of the set. In the hours before her death Winnie O’Connor is in two places at once deliberately to bring the Doctor out of hiding. The temporal shenanigans are purposeless, a red herring to attract the sort of the person abhors a temporal anomaly, who gets itchy when there is s a crinkle in the fabric of space and time. By firmly mentioning the death of Sandy at her hands, Sweet ensures that Winnie being able to walk back through her last few hours has an emotional bite to it. The train is racing forward to its destiny but she is trying to fight backwards to alter the biggest mistake she ever made.

Standout Scene: The image of the Doctor stepping out of the darkness to save Winnie from falling to her death on the train track and failing is one I wont forget in a long time.

Notes: With the opening mystery of a dark location to solve and scenes such as the hands on a watch expressing the rewinding of time there is more than a touch of The Chimes of Midnight about this story. But my mama always said if you’re going to nick off anyone it may as well be the best! The two stories have a very different feel but anything that even remotely reminds me of that Rob Shearman masterpiece is doing something very right.

Result: Matthew Sweet and Jago & Litefoot are a match made in heaven. He came onto the scene in Gary Russell’s swansong, The Year of the Pig, and a lot of people found the verbose of the script and the luxurious sensuality of the story a bit too much to handle. Tether his hedonistic writing to the supernatural ingredients built into Jago & Litefoot and you automatically have something which is dripping with quality dialogue and is genuinely very spooky to listen to. Opening with an intriguing mystery and unsettling atmosphere and bringing this seasons villains out of hiding in a very permanent way, this is some very confident set up for the season finale. The more I hear of Leela on audio these days (and her three way split between Gallifrey, the 4th Doctor adventures and Jago & Litefoot means I am certainly not denied that pleasure) the more I find the character one of the most perfectly crafted to have leapt from classic Doctor Who. She works in past, present and future settings and Louise Jameson is fast becoming one of the most prolific and skilful actresses that Big Finish has on their payroll. This is her best turn yet in this series with Sweet giving her some magnificent dialogue and moments of ingenuity, charm and menace. The Lonely Clock also exposes how talented Lisa Bowerman has become in the directors chair of late. After the musical hall bawdiness of Jago in Love and the poetic sorrow of Beautiful Things she enforces an eerie quietness on the third adventure of the series that had me on edge throughout. It’s the same trick she employs in the best of her companion chronicles releases (the Sara Kingdom/Oliver Harper stories) and its astonishing how cutting out a noisy soundtrack (when that is all audio has to bring itself to life) and using the music and special effects sparingly can induce a feeling of anxiety. The Lonely Clock is another assured piece of storytelling that only loses points because it is inevitably the set up for an even better conclusion: 8/10
Posted by Doc Oho at 09:16