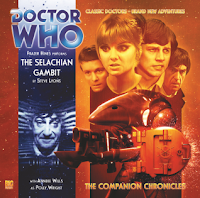 What’s it about: The Doctor doesn’t normally need money, but when the TARDIS is immobilised and a fine has to be paid, a loan from a bank in the sky seems the solution to his problem. But then the Selachians arrive, and the Doctor and his companions find themselves as hostages in the middle of a heist. Death seems an absolute certainty. But the Doctor, Jamie, Polly and Ben have outwitted death before…

Lovely Lashes: As soon as the Doctor mentions that everybody could do with a nice steaming cup of tea Polly despairingly knows what that means for her! Its great how they subvert what was blatant sexism in the sixties for something much more devious – the Doctor is sending Polly off because he knows that she is capable of thinking through a solution to their problem (ala Polly cocktail in The Moonbase).

Who’s the Yahoos: Its easy to forget how new Jamie was at this time travelling lark at this stage because we are all so used to his character by now. He is delighted that they cannot leave because he keeps marvelling at the magnificent starscape out of the banks windows and is happy that there are no monsters chasing them around for a change. Spoke too soon, Jamie! I love the way Jamie describes the glue bomb as a ‘rubber bladder’ and fails spectacularly to understand what Polly is asking him to do with it and their fudges up their plan to overpower the Selachians. You can count on Jamie to make a situation better by venting his frustration and he hurls his glue bomb at the bomb which clogs up the timing mechanism and de-activates it. You begin to see why it might be useful for the Doctor to have him around.

Sexy Sailor: Lyons writers beautifully for Ben with some delicious cockney phrases and outbursts. I can really imagine Michael Craze bringing this dialogue to life (‘did you clock that sparkler?’). Ben pops out of service hatch covered in sealant glue just at the moment Polly needs to think up a plan to bring down the Selachians. You’ve got to admire Ben’s honesty, telling the Selachians that they were planning on whacking them out when they fail. When they have to distract the Selachians Ben calls Jamie a ‘tartan twerp!’

Oh My Giddy Aunt: I love these Troughton adventures when Frazer Hines is involved because it genuinely feels as though I am listening to Troughton play the Doctor and it gives me a giddy thrill each time he speaks. For some reason hearing Hines declaring ‘No Jamie no!’ in a very Troughtonesque manner gives me butterflies. There comes a point when being a self confessed anarchist works against you and that is when you need an official identity in order to claim your property back! He claimed they were free spirits and that rules didn’t apply to them and as a result they’ve lost the TARDIS to the officials! There are questions on the form for an application to the bank that he couldn’t possibly answer such as name and address! The cheek of suggesting he had such information! Its easy to see why we love the Doctor so much, especially this Doctor, when he criticises machines for being too inflexible and officials for being too bureaucratic. Brilliantly during the siege the Doctor takes the opportunity to ask the bank manager if he can secure a small personal loan to get the TARDIS back. I can so imagine the second Doctor enjoying himself juggling with a bomb, being in the most mortal danger and yet making light of it all the same. He naughtily delays telling everybody how long the bomb has before it explodes (about 60 seconds!) until the last minute and then hops about like a flea on a griddle trying to get rid of it! He manages to swindle the TARDIS back by saying it was space debris that he found floating about and if he wanted it back there would be paperwork in triplicate, he accepts a reward so they can bypass all that nonsense and get out of here.

Standout Performance: Hines and Wills bring this story to life on their own although the is a little element of Troughton and Craze in there too. All four of them are delightful. 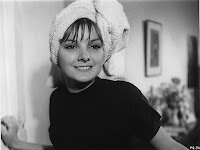 Sparkling Dialogue: ‘You couldn’t break through that door with all the canon of Culloden!’
‘We weren’t supposed to stick the glue bombs in their dials you pranny!’ is the first line of dialogue from the second episode!

Great Ideas: Whilst Lyons’ previous companion chronicles featuring Polly was a standout because it went for the dramatic jugular and revelled in its bleak historical atmosphere The Selachian Gambit seems to be mimicking the exact tone of those early Troughton adventures – fun! There’s more Carry On humour as Jamie is described as a ‘skirt wearing female!’ Whilst The Power of the Daleks is a powerful psychological drama the remaining Polly and Ben stories revel in the party atmosphere of the late sixties. The Highlanders features comic cross dressing and some gloriously over the top villains, The Underwater Menace takes the term camp excesses as a challenge and proves to be an intoxicating farce, The Moonbase sees our heroes having a trippy moonwalking experience and The Macra Terror opts for a gay and cheerful holiday camp backdrop to its insidious menace. Add to the mix Troughton’s nervous and overly silly performance in those early episodes and you have an addictive taste of irreverence to the early stages of his era. Whilst all of these stories enjoy their darker moments too there is a general feeling that the production team has really found the fun since Ben and Polly came along (indeed the first story after their arrival is the joyously lawless smuggling adventure!) and Lyons taps into that brilliantly here.

Imagine the TARDIS being clamped? I really laughed when Frazer Hines played the prim and prissy Mrs because it would have made more sense for it to have been Anneke Wills but it captures the tone of the era better with this dragging up of the character. One of the complaints I heard bandying around about The Architects of History was that the Selachians weren’t strong enough monsters to give the story the dramatic boost it needed. Almost as if in response to that Lyons includes them in this tale of frippery and doesn’t even pretend that they are supposed to be scary. They are walking muscle, there to cause problems, bully people and generally get in the way and they do that very effectively. I like the idea of a vault which will reveal nothing but empty space if the correct combination isn’t entered, diverting you to a pocket reality. There’s a brilliant gag criticising the fastidious nature of banks where the Doctor is trying to dispose of the bomb and they cannot get access to the pocket reality vault until he has opened an account! One of the major clients of the camp is a weapons research facility and held in the vaults are the blueprints of their six biggest projects. The Selachian mutilated their own bodies so they could fit inside battle armour and leave their world and fight. The G-Bomb can collapse a planet inside a black hole in seconds and that is exactly the kind of weapons tech the Selachians are after here. Rather wonderfully it seems that this siege was entirely for naught because the bank has already been robbed before the Selachians arrived! This whole thing has been a set up from the beginning because Galactic Bank is in serious financial trouble – it’s a massive insurance swindle to blame the Selachians on the missing items. Lyons manages to destroy the entire bank from Polly’s POV and marking a dramatic sting in the tale whilst still avoiding a cheat by having the 15 survivors leap into the pocket reality to safety.

Audio Landscape: Dost my eyes and ears deceive me or does this story feature the return of Alistair Lock, musician and sound designer extraordinaire who helped launch Big Finish to its heady heights in the early days? A buzzing forcefield, footsteps, electricity crackling, Selachian weaponry, their gurgling voices, sparks playing around the Selachians fingers, the vault blowing open, the empty expanse within, Polly making the tea, Ben clambering out of the ducting, the bleeping bomb, the disorienting effect of listen to the others from Jamie’s point of view as he is being attacked by a Selachian, Polly over the echoing comms system, Selachian tearing boxes down.

Musical Cues: Delightful music as Jamie tries and fails to attack the Selachians. In fact the light footed comedy music throughout this story is extremely agreeable. Are you back for good, Mr Lock?

Notes: It would be churlish of me to point out that this story bears striking similarities to both Lyons’ BBC novel The Murder Game and the recently published Borrowed Time but you know that isn’t going to stop me! The former was a story featuring the second Doctor, Polly and Ben and the Selachians set on a hotel in space and the latter was a ridiculously enjoyable spaghetti plotted adventure set for the most part entirely within a bank. This story has a very different tone to either of those adventures however and never feels like an imitation.

Result: A sunny delight, The Selachian Gambit turned a particularly unpleasant walk to Tesco being battered by the elements into a joyously funny and enjoyable experience. By the end of the first episode I was so wet even my undies were soggy but I walked into the entrance of the supermarket with a massive smile on my face! Steve Lyons is such a skilful writer and one of his greatest attributes is never offering what the audience is expecting. I never thought there would be a gripping historical featuring the seventh Doctor and Mel or a timey wimey Nazi drama (years before Let’s Kill Hitler) and who would have predicted such a dark character study of Polly? The Selachian Gambit trumps our expectations again by offering something completely frivolous and enjoyable but its just as gorgeously written as Lyons’ previous works and I would say that frothy entertainment is sometimes even harder to pull off without it seeming slight and insignificant. The characterisation of the regulars is spot on and Frazer Hines and Anneke Wills tap back into that innocence of the early Troughton adventures. There is a focus on character traits that we know really well (Polly put the kettle on, Jamie the action man without a brain) but they instantly whip up an image of the era and this could happily snuggle between The Moonbase and The Macra Terror. The joy of this story is how it could have been put together at the time with just a handful of sets and a lot of imagination and how it takes a standard bank robbery plot and does something far more creative with it. I thought it was wonderful: 8/10
Posted by Doc Oho at 05:33