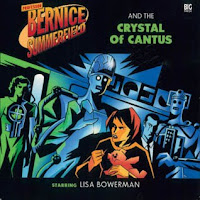 What’s it about: Fabled crystals from long-dead civilisations. Jason Kane blundering into situations out of his control. Entombed Cybermen waking from a century-long sleep. It's all in a day's work for Professor Bernice Summerfield. Armed with her endless supply of witty quips and penchant for lost causes, she'll find the Crystal, rescue Jason, destroy the Cybermen and be home in time for supper. Except, this time, it's different. This time, as the saying goes, it's personal. And, after this adventure, things will never be the same again

Archaeological Adventuress: Bernice is not convinced about the cover story of Jason and Brax heading off to Berkoff 4 (what a great name for a planet of thespians!) to watch a Galyari production of Shakespeare! Oh dear Benny has sneaked away on Brax’s shuttles near the oxygen cylinders and one of them has a slight leak! I loved Jason telling Benny that she isn’t the centre of everyone’s universe because sometimes I really think she needs that touch of cold water to the face. One minute she’s having a go and the next minute she wants a go…but that is why Jason loves her! As soon as Bernice recognises the symbol of the Cybermen she wants to scarper, she is terrified of them. Bernice remembers being young and naïve like Parasiel but then she was exposed to things that made her realise how dark it all is. She knows she is fighting a losing battle but she tries to convince her converted ex husband to hold onto his individuality wielding the strongest weapon she has – her love for him. Just a year ago she lived on the Collection with her mates; Brax, Clarissa and even the bloody cat but now everything has been turned upside down and they are all gone.

Benny’s Gang: Parasiel tried to ask Braxiatel about the events on Cantus when he was packing up his stuff to leave the Collection. Braxiatel left his home so his people could survive? Its nice to see that when the chips are down Brax is as much as a coward as anybody else and he and Jason spin some awful web about laser eyes and subduing stowaways when they think somebody is on the shuttle! When they get into a tête-à-tête he tries to step in as a mediator but really…he should know better. Braxiatel is more like the Cybermen than he is Benny as he came to realise that there were things that threatened them, dark things that threatened to their very survival and he had to take measures that were more important than any one life. It happened to his people and then it happened to the Collection and so he made the descision to do something that would ensure their survival. He made the very naughty decision to contact his former self to arrange for a Gallifreyan artefact to be sent. He arranged the romance between Ronan and Clarrisa because he needed her just a little bit longer. He also arranged for Thesanius to contact Bernice and for Jason to intercept the message so he could get Jason to Cantus and convert him into a Cyber Controller.

Jason is worse than a teenage girl when it comes to gossip about Adrian and Bev. He encourages the worst when he says nothing could possibly go…whoops. Jason being tortured by the Cybermen is almost too uncomfortable to listen to – you really feels as though it is the end for his character and his converted image on the cover doesn’t help at all. He realises that Braxiatel has been responsible for his headaches, he has been pulling his strings like a puppet. Brax has always considered he was too stupid for Bernice. He tries desperately to resist conversion but eventually gives in but begs for Brax to look after Benny and Peter even after his mind is consumed. Whatever has happened to him on Cantus it has cleared Jason’s mind and he can now remember all of Braxiatel’s manipulations. He thrives on mayhem and likes the idea that all bets are off now Brax has gone and who knows what will happen.

Standout Performance: I was fascinated by Miles Richardson’s performance as Braxiatel because we have never seen the man as desperate as he is here before. Usually Brax is the centre of tranquillity, always ready with a quick barb worthy of Noel Coward and even when the Fifth Axis took over the Collection he remained a stoic figure of calm resistance. But in Cantus he is genuinely unnerved by the Cybermen’s games with him and frantically tries to figure just what they want to do with him and Richardson plays that madness with chilling accuracy.

Sparkling Dialogue: ‘It’s a story about what will do to survive. Because we’ve all got to survive. Haven’t we?’
‘This isn’t just another story! Professor Bernice Summerfield in and exciting adventure with the Cybermen!’
‘Why don’t you try being more like us!’

Great Ideas: Like a slap in the face by a ten ton rock this adventures opens where we should have been at the beginning of this season – a formidable opening and promising danger, excitement and revelations. I really like the way Joseph Lidster narrates this tale with hints from the beginning about devastating consequences for the series, Parasiel asking for the tale to be recounted by both Benny and Brax after said events and how like a scattered jigsaw coming together there are lots of cuts to previous scenes as it all slots into place. The Cybermen are described as people on a dying world trying desperately to survive and replacing their weak human bodies with machines becoming monsters. It has been months since whatever happened to make Braxiatel leave the Collection and Parasiel is desperate to know what has happened. It was supposed to be a surprise that Brax and Jason were off to fetch the fable Crystal of Cantus for Benny but she rather spoilt that by stowing away on board. Bernice living up to Parasiel’s expectations by jumping straight to the Cybermen and all the action leads to a hilarious sequence featuring Brax screaming ‘Oh no you don’t you metal bastards!’ and the Cybermen laughing (literally going ‘ha ha ha!’) in a monotone! If the Cybermen came to the Collection they would take everyone and make them like them and they wouldn’t care when they did it. Should anybody think of attacking the Collection again Brax has a ready made army of

Cybermen and a CyberController to command them waiting to save them. The artefact that the younger Brax sent his older self was a jewel from the Coronet of Rassilon which once yielded gives you power. You realise with inevitable cruelty that Bernice is going to discover Brax’s hand in all of this…he tells her that Jason is dead almost at the exact same time Jason reaches out with his mind and begs her not to leave him. Bernice wields the crystal and destroys Braxiatel’s Cyber army.

Audio Landscape: The choice of using very original series Cylon voices for the Cybermen is excellent (if you’ll pardon the pun!), they just sound so cool! The harsh tones of the Cybermen burst from the speakers screaming ‘WE WILL SURVIVE! YOU WILL BE LIKE US!’, Peter laughing, the Garrazone jingle, gunfire, they use the background hum from The Wheel in Space to unnerving effect, the most irritating answer phone message known to man, lovely stomping Cyber footsteps, electric warble as the Cybermen leap into action, laughing, birdsong, Cyber guns, Cybermats bleeping, rain falling, applause.

Standout Scene: The sudden appearance of Ronan who went missing during the anthology A Life Worth Living suddenly makes you realise that there is a running story that is being built up in this range and you have to flit between both mediums to get the full benefit. It is a giddy feeling to get pay off like this. Brax promised Ronan a summer adventure and instigated a romance between him and Clarissa Jones after the death of her Fifth Axis lover. Upon learning that he was also a Fifth Axis soldier (information planted by Brax) she asks him to leave the Collection and he is never seen again. Now we find out what Ronan’s side of the bargain was for his summer affair and its not pretty…

Also the shocking moment Benny comes across a Cyberman crèche full of newborn babies with implants. Her hysterical reaction says it all.

Notes: ‘They were like us once. A long time ago anyway. Their planet goes tits up so they start to replace their human bits with robot bits. Then they replace their brains with computers and before they know it they’ve lost any sense of being human. Then their planet gets destroyed and they head off into space to find a new one. And they start to think it would be a great idea if everyone was like them. There’s a whole bunch of wars and everybody thinks they’re dead and then some bloody stupid archaeologists find their tomb. These esteemed and clever archaeologists inadvertently find the Cybermen’s tomb on a planet called Telos. More wars and again they were pretty much destroyed. Turns out they’ve got more than one tomb and there are a whole bunch of them dotted about the galaxy. And we’ve just blundered in and woken them up’ – the history of the Cybermen as recounting by Professor Bernice Summerfield.

Foreboding: With Brax gone, the Draconians claiming they own the Collection and the Mim starting to make threats all the pieces are in place for the next season.

Result: After one outright disaster, one tale of frippery, one nicely written but poorly executed thriller and one bland but well characterised filler adventure The Crystal of Cantus comes as a real shock to the system. The range has been cruising on autopilot for a while and this is a sudden reminder of how good it can be when firing on all cylinders. It promises massive changes to the range and delivers, it uses the Cybermen in an imaginative and chilling way and it re-integrates the Collection and all the pleasing continuity that comes with it and uses the horrors of the recent past to create some excellent twists. Joseph Lidster is exactly the sort of controversial writer to breathe some new life into the range and he takes hold of Braxiatel’s character and finally reveals him to be the villainous mastermind that we always suspected. Add in some terrific performances (Stephen Fewell has never been better) and a feeling that there is lots of drama ahead and they couldn’t have ended the season on a better note. A superb end to a duff season: 9/10

Buy it from Big Finish here: http://www.bigfinish.com/65-Bernice-Summerfield-The-Crystal-Of-Cantus
Posted by Doc Oho at 09:29