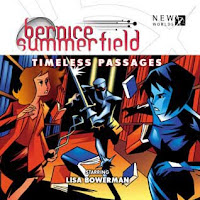 What’s it about: For years the great Labyrinth of Kerykeion has been home to one of the largest libraries of human incunabula in the galaxy. Here, otherwise lost volumes are all carefully preserved. From tomorrow, it's under new management. Professor Bernice Summerfield is sent to acquire some of the rarest books for the Braxiatel Collection before the new corporate owners bulldoze their way in. She's hoping for a quiet time searching the archives. Some chance. Soon she's investigating a horrible murder, and is caught up in a last-ditch scheme to save the entire library. There's a vicious, insane killer cyborg on Benny's heels. And then ancient subterranean powers begin to stir.

Archeological Adventuress: Bernice might have made a bad impression what with her drinking wine on the trip but she is good with babies and she proves so by shushing Jean’s tears away with compliments. Benny actually calls Bev her boss now so it would appear she has stepped into the vacuum left by Braxiatel and she has sent our esteemed Professor on a wild goose chase. She’s a shameless swinger and leaving her diary for a lot of other books. Saying some like ‘don’t go down into the lower levels for your own good’ is like saying ‘don’t eat that steak’ to a man who has been fasting for a week. As soon as Bernice discovers an ancient helmet she immediately wonders if it is going to start glowing and contain an alien intelligence because she knows exactly how her life goes with things like things…but it turns out its being used a s a rusty flowerpot. Nazis have done much worse things than burn books, she says and it’s a gorgeous touch of continuity. Bernice feels that the library is a little too…human and thinks that there are plenty of non human cultures whose works of literature need to be saved too. Spool wants Benny to convince Bev to buy the whole library but it is just too big an acquisition and she can only salvage the books she has been sent to collect. She instead opts for trying to convince Bev to buy the planet. Since she will be stuck waiting for the Adjudicators to arrive and scrutinize Wolfe’s death Bernice figures she might as well do what she does best and investigate. She’s a big fan of Occams Razor, if you have a murder committed by a knife wielding maniac and then a psychotic android turns up waving bloody great spikes you’ve at least got a chief suspect! For the next few days after she leaves the library she will just have her diary and her thoughts for company just like the old days.

Standout Performance: An astonishing performance from Lisa Bowerman who has to hold this incredibly intricate story together with her sheer force of Bernice’s humanity. The script paints Benny in a fantastic light and as a result Benny guides the script through its many twists and turns and makes the whole thing blissfully coherent. Bowerman has always been one of my favourites but here she is beyond compare.

Sparkling Dialogue: ‘How can you own a planet? You can’t. All you can own is a bit of paper saying you own a planet!’
‘Books are little theatres of memory and everything here will be forgotten.’
‘I’ve got your scent! I’ve got your stink! Run all you like my knives will have your nice skins!’
‘There’s nothing wrong with my hearing you quivering old fart!’
‘The writing side wins history.’
‘Don’t you ever shut up?’ – clever, clever.

Great Ideas: The Library on Kerykeion is home to one of the largest collection of human publications outside of Earth and Bernice is heading there to buy up what she can for the Collection. Unfortunately she manages to insult the man who owns the planet before even setting foot on it. Most of the library is underground and can I say as somebody who pretty much gets off on a good bookshop (we have a second hand one in Eastbourne that is on four levels and has books piled floor to ceiling throughout and it is like a treasure trove just explore one corner – I could spend days in there, in fact I have!) this is one of the most appealing concepts I have heard yet – a labyrinth of dusty old books! The books that Bernice flicks through about gay Bulgaria (‘bet it doesn’t live up to its name’) or by Robert Dalek (‘Bet he changed his name’) are great. There is over 200 million rare and valuable books in the library that are going to be destroyed and Benny is only taken 200 or so. What a waste! Books are memory – our ancestors started writing things down so they didn’t have to remember them and all those stories and myths made remembering things so much easier. Words in a literate culture are a form of power because they state who owns what. TeknoCult could store the entire contents of the labyrinth on the inside of a ball bearing. They collect human texts not because they are parochial but because humanity is very good at trying to forget its past and rewrite its memories to flatter its present (‘the memory cheats’). Bernice discovers Wolfe all over the room – in chunks! Wolfe dismissed his legal team not long before his death and Bernice wonders if this is an attempt by Spool to hold of the destruction of the library. The Idolons have been there since the library was founded, they are preservers and the idea of the library means something to them. The psychotic knight that chases Benny around the library is a fantastic character and he adds a welcome touch of camp humour to an otherwise intellectual enterprise. Hermione wants to branch out and go for manuscripts, electronica, tablets, ogonbolcs and all the other ways that humans wrote things down. Bernice suggests a wider approach, to extend their library beyond Earth to inhabited planets that humans have never seen, Dyson Spheres, World Ships, langtubes, zero spaces and things eh can’t even imagine but she has been to. The structure of the library doesn’t just preserve books, it preserves bodies as well and that was its original purpose. Jean is dying with a disease that chews away at her bones and when she cries that is the sound it makes. Wolfe came to the library because he wanted to heal her condition because he knows what the original function of the building is and from midnight the whole planet belongs to Jean. Bernice is the one who figures out that the building is a time machine, the labyrinth extends in different directions through time as well as space and once you are off the safe paths you can wind up anywhere – past or future. That’s how they have been able to save so many books because they have been able to link up with other structures throughout history. Turns out the person who woke up Benny…was Benny and she left her in the corridor to be found by her earlier self. And even better Hermione turns out to be Jean from the future – save the best surprise for last.

Audio Landscape: John Ainsworth uses Simon Robinson’s sound effects sparingly and so they make far more of an impact. When intelligent discussion is abroad the atmospherics are pulled back but that only serves to make scenes like Bernice’s rude awakening by running footsteps and Jean crying all the more unnerving. Opening a bottle of wine, an intercom, baby Jean crying, Bernice scratching in her diary, pouring wine, banging on Bernice’s door, scraping stone, stomping footsteps, the creaking sounds of the statues, the camp electronics of the knight (meep! meep!), Bernice sends the android to the bottom of the lift shaft and you can hear him scrambling back up (once he has found his legs), dripping water, Benny treading water in the pools, the androids insane scream is horrible.

Standout Scene: Impossible to choose. This story is that good.

Result: Atmospheric and intelligent, this is a blisteringly good audio for the Bernice Summerfield range and raises the bar for how good a non-arc tale can be. The story is told on a tiny scale but much of the dialogue is transcendent and the discussion of knowledge and preserving culture really appealed to the bibliophile in me. However this isn’t all dry discussion; Bernice is at her desperate best, there is a psychotic android on the loose that is trying to kill everybody (he’s just vile but very funny with it) and there is the mystery of the Idolons to solve. It’s a massively evocative piece with Simon Robinson more than making up for some lacklustre productions last year and John Ainsworth giving the whole piece a very polished, stylish feel. Daniel O’Mahony brings a touch of class to the range with his faultless script and I hope it isn’t long before he returns to the series. The way he has of allowing his concepts to grow organically within the story revealing new facets all the time took my breath away. Quite my favourite story since The Masquerade of Death and it works for all the same reasons; its creative, surprising and hugely engaging. Lisa Bowerman said in my interview with her that this is one of her all time favourites and its easy to see why: 10/10

Buy it from Big Finish here: http://www.bigfinish.com/72-Bernice-Summerfield-Timeless-Passages
Posted by Doc Oho at 09:50