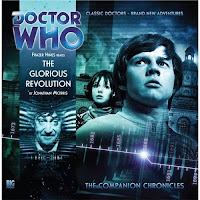 What’s it about: After years as a companion to the Second Doctor, Jamie McCrimmon was returned to his own world and his own time, and his memories of his travels were erased. Until now. A visitor from beyond the stars needs to explore Jamie’s past, and discover what went wrong. What happened in the year 1688, when the TARDIS landed in London, and the Doctor, Jamie and Zoe were welcomed into the court of King James II. It was the year of the Glorious Revolution. And the birth of a whole new history.

Who’s the Yahoos: Whilst The Highlanders and The War Games offer an intoxicating peek into history they don’t use the period to get under the skin of the characters like the best Hartnell historicals did and The Glorious Revolution repeats the enchanting conflict that stepping back in time can brew between the regulars. Jamie feels very strongly about being given the chance to alter history in Scotland’s favour, he has had a life full of the English triumphing and pushing the Scots around and here he has the opportunity to make a difference for his people. When the Doctor says his usual spiel about observing and not interfering Jamie throws a handful of occasions in their travels when they have done far more than just observe. Jamie feels that it is only okay to meddle when it is something that the Doctor feels strongly enough about. A terrible suspicion enters Jamie’s mind that by defying the Doctor’s instruction he has set history on a terrible path and that the Doctor and Zoe are now in danger. Its easy to forget what a man of action Jamie was and he really comes into his own as he leaps into the throng of jeering observers to the Doctor and Zoe at the gallows, throws some punches and saves their lives. In his experience travelling with the Doctor mean danger was hiding in every shadow. When the King admits defeat and dismisses the throne, wallowing in self-pity, Jamie gets his first taste of being let down by somebody he has always admired.

Oh My Giddy Aunt: The Doctor is said to have fought with his umbrella and scampered down the street! As they were still developing their relationship Evil of the Daleks revealed that there was some scorching drama that could be coaxed from having the Doctor and Jamie at odds with each other. Jamie is quite a hot headed character for all his comic edge and its fascinating to see that if he is worked up enough that he will openly defy the Doctor’s instructions and there is nothing the Time Lord can do about it. When Barbara defied the Doctor in The Aztecs he was furious but his successor doesn’t take that approach – he can understand why Jamie did what he did even if he doesn’t agree with it. He is far more concerned with undoing the damage than remonstrating with his friend. When the time comes the Doctor insists that it is Jamie who stops the King from fleeing the country and ensures history goes back on track but again its less of a punishment and more him trying to see if his lesson was learnt.

Brainy Beauty: Even Zoe objects that she should be the one to dress up as a laundry maid (being a girl and all) but clearly the Doctor cannot resist dragging it up when he heads back into history!

Standout Performance: Once again I am struck at how uncannily accurate Frazer Hines’ portrayal of the Doctor is – at times you will genuinely think that Troughton is taking part. He conjures up that quiet throaty cheek the second Doctor brought to the series and the script takes the effort to remind us just how charming he could be.

Sparkling Dialogue: ‘We looked like a couple of old fishwives!’
‘That’s history Jamie. Often not how we would wish it to be but all the more interesting for it.’

Great Ideas: By stepping in and helping a woman struggling with a riotous crowd, the Doctor, Jamie and Zoe are directly responsible for saving the life of James Stewart, the Prince of Wales! The War Games proved that there was an incredible amount of untapped potential in the historical genre for the second Doctor to explore and I am pleased to see writers taking up the challenge so well (Resistance was a similarly bold historical drama). William of Orange has an army waiting to march on London to usurp the King and make him change his policies – involving the Doctor in such important events can only lead to trouble. They call it the Glorious Revolution because almost nobody died. 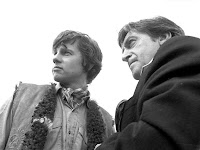 Now Jamie has seen to it that the Prince wont abdicate there is talking of burning fires in every town and killing all of his enemies and only then there will be peace. You’ve got two very strong images; the first of the Doctor and Zoe facing the gallows and then of Jamie slowly vanishing as he starts altering history to an extent that he never existed. If King James never abdicated there was no Jacobite uprising, no battle of Culloden and consequently Jamie never met the Doctor. Two timelines, co-existing and yet contradictory, are running parallel.

Audio Landscape: Listening closing to the script I was impressed how Jonathan Morris managed to sneak most of the sound effects needed into the dialogue itself. The TARDIS landing and interrupting Jamie playing his bagpipes, rain pattering onto a narrow alleyway, a gunshot ringing out, a rowing boat bobbing on the water and thudding into the mooring post, horse and cart clopping along the road, a ticking clock reverberating around the throne room, crackling fire, a cheering crowd, the church bells ringing out for the Kings abdication, a terrible storm brews with hailstones battering down, the creaking deck of the ship,

Musical Cues: I don’t know if it is because they are narrator by one or two people only or if the production levels are simply strong but I find the music for the Companion Chronicles often exceeds that of the other ranges – both the main range and the other spin offs. The score for The Glorious Revolution is exceptional, much more of a driving force than the disquieting stings of The Drowned World and constantly upping its game as the story takes on more and more dramatic twists. The insistent beats as the Doctor and friends desperately try and sneak the King out of the City by boat was breathtaking.

Standout Scene: The cliffhanger is extraordinary as time is rewritten within Jamie’s story to the point where he doesn’t remember telling it in the first place. History is damaged by their adventure and Jamie doesn’t know who the Doctor is at all. A haunting idea in both cases and a cliffhanger that has been skilfully built up to for maximum impact.

Notes: When a member of the Celestial Intervention Agency turns up in Jamie’s time he thinks the man must be soft in the head when he starts going on about travelling to the Moon with the Doctor. Sometimes him and Hamish get mistaken for each other. There are so many reasons that he had his memory taken away and amongst them were his knowledge of future events. Shockingly Jamie asks for his adventures to be wiped away again because if he had known all these years what he had lost he would never have moved on with his life and been as happy as he was. It’s a brave decision but one that I understand. And this time it is his choice.

Result: History whips a potent drama once again and this time (for Jamie) it’s personal. You get a lot of bang for your buck in The Glorious Revolution; some mouth-watering and unusual conflict between the Doctor and Jamie, another valuable and interesting history lesson in the unique Doctor Who format, a chance to hear Frazer Hines charm his audience as both the Doctor and Jamie and another typically flawless production with the direction, sound effects and musical score at the top of their game. By taking the Troughton characters and planting them in a Hartnell style drama is a stroke of genius because there is so much untapped potential in Jamie’s previous life that is ripe for exploration. I love that this story takes Jamie’s defiance of the Doctor about as far as it can go and yet never once feels out of character – he is a boy of strong beliefs and is willing to do his bit to make history easier on the Scots. There are surprises aplenty (especially the terrific cliffhanger) and throughout I was enraptured by the detail and educational nature of the story. It’s worth listening to just for the hilarious scene where the Doctor and Jamie drag up as washerwomen and remove the King from the Palace in a linen basket! If the Companion Chronicles can keep up this level of quality in their fourth year it will easily be the best year yet: 9/10

Buy it from Big Finish here: http://www.bigfinish.com/402-Doctor-Who-The-Companion-Chronicles-The-Glorious-Revolution
Posted by Doc Oho at 11:54

This is my favourite Second Doctor audio drama and Big Finish's best use of Jamie to date. I was doing a historical module on the Glorious Revolution at about the time that this came out, funnily enough.