Solitaire written by John Dorney and directed by Nicholas Briggs 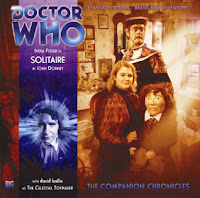 What’s it about: “What if there were a game you didn’t know you were playing? Where you didn’t know the aim and you hadn’t seen the rules?” Charlotte Pollard arrives in a toyshop, but she doesn’t know where she is – or even who she is. The mysterious owner wants to play games. He’s the Celestial Toymaker, and he has already defeated the Doctor, whose essence is hidden inside a ventriloquist’s doll. The Doctor is gone. The TARDIS is lost. But the game is only just beginning…

Edwardian Adventuress: All Charley remembers at the beginning of this story was that she was with somebody and they were worried that they were in danger. When the Toymaker asks if Charley thinks the courtship game where you only admit your feelings at the last minute sounds familiar – pre-empting what would happen in Neverland when Charley asks the Doctor to kill her and finally admits that she loves him. In a way the Toymaker exposes the naiveté of Charley because of course you should expect complications and obstacles in a game, that is the very nature of them after all, and the way she figures she can just guess her way out of this unscathed is very green. The more she plays the more she understands the nature of games and she figures the solution has to be within plain sight otherwise what is the point? Charley only gets really scared when the Toymaker is excited at how unpredictable the game has become now that he is part of it. Charley understands that there is more to games that winning or losing – what ever happened to playing for fun? Even when she sees through the complexities (or should that be simplicities dressed up as complexities) and escapes I love the assertion that maybe she hasn’t escaped after all and she is still playing the game…

Breathless Romantic: The Doctor is stuck in the form of a puppet and Charley is delighted at his Byronesque hair and real velvet jacket. Little does she know she is holding her best friend. He beat the Toymaker before and he is still bitter about that defeat, especially when Charley uses that information like a weapon. Since the Doctor has always prizes the ingenuity of his travelling companions and seeing that this is a one player the Toymaker thought it would be amusing to hazard his life on that trust.

Standout Performance: A friend of mine recently asked if she could borrow some Doctor Who audio dramas. I wasn’t sure at first if she was just humouring me because she knows I write these reviews or if she genuinely wanted to experience them for herself. Turns out I am incredibly conceited and she has been enjoying a lot of talking books of late and thought it would be interesting to try out a full cast audio drama in the Doctor Who format – she loves the new series but has never seen any of the classics. I really didn’t know how she would get on but I gave her The Chimes of Midnight and she thoroughly enjoyed it. After discussing it she said that she found it genuinely creepy in places (she listens with the lights off but she decided to turn them on) and really got into the story. Her one criticism (besides the ending) was that she thought India Fisher’s performance was a little one note and enthused – the same problem that she has always had with Freema Agyeman’s Martha Jones. And so I went back and listened to it. Whilst I found that the story was as awesome as I remembered she was right. There is a forced hysteria in Charley throughout that actually sounds a little grating after a while. I bring all of this up to mention that I genuinely believe Fisher improved tenfold as an actress the longer she was involved with Big Finish and come the Colin Baker stories she was giving some of the finest companion performances we had. Come Solitaire that stiffness is gone completely (even though she is supposed to be the same Charley from season two) and Fisher is a revelation – allowing Charley to be childish and complex, naïve and clever and the way she goes from being the amnesiac victim to the domineering protagonists over the course of the two episodes is effortlessly achieved. I wouldn’t want to forget the purring menace that david baille brings to role of The Toymaker and the script affords him the reverse journey from Charley so he gets to explore a much broader range as the Toymaker than before. This is a demanding two hander and both actors shine.

Sparkling Dialogue: ‘Finding the aim of the game is the aim of the game!’
‘Do you know how many four letter words there are in the English language, Miss Pollard?’ ‘I can think of a few at the moment.’
‘If that’s all you care about then you’re not enjoying the game and if you’re not enjoying the game then what’s the point of it?’ – Charley on winning.
‘Your ingenuity knows no beginning, does it?’
‘You can’t lose a game that you’re not participating in!’
‘I am the Toymaker and I do not lose!’

Great Ideas: No one is too old for toys and games, the older you get the more you see there is nothing else. The very nature of the dolls that were once people having their strings pulled and screeching in a childish voice ‘get out of here, he’ll kill you!’ is enough to sell the concept of the darker side of playing games. It’s both very funny and utterly unnerving. How do you play a game that you don’t know you are playing – when you don’t rules and you don’t know the aim?

Solitaire is all about the nature of games and John Dorney managed to achieve one of those rare achievements in fiction; it made me look at my own life in a very different way and that is an incredible feeling when you are listening to fiction. Life is a game, every time you wake up is an achievement of sorts, social interaction is a game and so is the courtship dance of two eventual lovers. A status battle within the workplace, the race for promotion – both games. The reproductive process, the desire for genes to reoccur and dominant – a game. The simple act of disagreeing over what to have for dinner, a game. Politics, religion, war (a game on a bigger scale with harsher penalties) – life is a game. This is brilliant writing and makes you search through every aspect of your own life to think of friendships, relationships, jobs, anything and allows you to see that it has all been a game of sorts. The thought of a sentient game is pretty disturbing – one that feels anger when you don’t want to play and forces the issue. Talk about keeping your participant motivated – this is a game where the shop you are standing will reduce its size by 10% every time you commit a penalty and eventually crunch down to nothing but just to keep you in the spirit it will do so anyway at intervals if you take too long to play! Brilliantly when Charley insists that games have to make sense the Toymaker hits back with the observation ‘how many bishops have you seen walking in diagonals lately?’ Charley thinks that she is so clever by throwing the doll inside the cupboard but with her memory stolen she doesn’t realise that it is the Doctor and she has killed him! When the Toymaker loses a game it is only a cost of pride that he has to face and he proves to be the lesser man by denying her her victory over him.

Musical Cues: There is a gorgeous music box motif to the music throughout that whilst sounding extremely pleasant on the air adds an unnerving element to this most jarring of adventures.

Standout Scene: So many moments to choose from but my favourite moment came when I realised that one of the most exciting and tense cliff-hangers ever consists of the Doctor entering the TARDIS. I laughed my head of at John Dorney’s ingenuity!

Notes: During the Toymaker’s ‘I went to the moon…’ conundrums he mentions Orson Wells, Edith Thomson, Sumarians and Nimon placing this story firmly into series two of the Eighth Doctor Adventures. It gives me a giddy thrill to think that one of the very best Companion Chronicles takes place in the very best season of EDAs. I will include it in my next re-listen of that incredible year and it will only enhance my enjoyment. I also beamed from ear to ear when the trilogic game was mentioned.

Result: My favourite aspect of this devilishly clever piece of writing is that on the outside it looks like a very simple piece of drama with two characters and one location but the episode is a puzzle box more akin to a TARDIS that has a straightforward exterior but infinite complexities within. The more you explore this tale the more the more rewards you receive and like a good game it has its own rules, its own obstacles and like a really good game it makes you believe so much is certain whereas nothing is quite as it seems. A story so surreal that when things start to happen that is the red herring and one that gets more complex as the playing field gets smaller. A one-player game that you don’t know you’re playing with a solution so simple it has been staring you in the face from the very first scene and one that is so exposed that you would never guess it until it is pointed out to you. The writer proves that the best way to hide a simplicity is to dress it up as a complexity. An attention-grabbing debut from John Dorney that impresses all the more because it can be enjoyed on so many levels (as a treatise on games, as another adventure for Charley, as a return of the Toymaker, as a puzzle to figure out and as a piece of drama packed with great dialogue and superb performances) that rounds of the impressive fourth season of Companion Chronicles with the best story yet: 10/10

Buy it from Big Finish here: http://www.bigfinish.com/412-Doctor-Who-The-Companion-Chronicles-Solitaire
Posted by Doc Oho at 08:12

its a great story, one of my favourite companion chronicles.