Ringpullworld written by Paul Magrs and directed by Neil Roberts 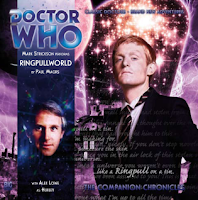 What’s it about: Vislor Turlough is in trouble again: piloting a stolen ship through a pocket universe on a mission that is strictly forbidden by the Doctor. He would be going it alone, but there is unwelcome company in the form of Huxley, one of the legendary novelisors of Verbatim Six, who is narrating and recording Turlough’s life. As they hurtle towards unknown peril, Turlough recalls his arrival in the TARDIS, and the circumstances that propelled himself, the Doctor and Tegan into the Ringpull universe. He has a story to tell. But only Huxley knows how it might end…

Over the Shoulder: Shame on me for sighing when I saw that Turlough was going to be the narrator of this story. It does good to remind me that the problems with certain characters during the mid 80s were not always the fault of the actors but the script editor who gave them such little material to shine in. Looking back at Turlough’s television stories he only really makes an impact in four – Mawdryn Undead, Enlightenment, Frontios and Planet of Fire and whilst admittedly he does some wonderful things in those stories they count for one third of his time on the show and the rest sees him skulking in the shadows looking shifty. Big Finish have given him a new lease of life with some wonderful stories of his going solo (I’m fond of Phantasmagoria, Loups-Garoux and Singularity) and now having some fun with the Tegan/Turlough/Nyssa combination (he had some of the best moments in the otherwise dreary Heroes of Sontar). Paul Magrs takes hold of the character and shakes him until lots of fascinating observations fall out – he has clearly studied the character carefully and he not only gets his voice perfect but also develops him extensively with it. A big fat bravo and a slap on the wrist for doubting Joe.

Turlough has been racking his brain for ages to think whom Huxley reminds him off and it has finally come to him – that irritating little swot Hippo from Brendon School! He never kept a diary as a child because he didn’t want people knowing his secrets. Turlough never used to care what people thought about him but ever since he’s known the Doctor he has been changing…and he’s not sure that the old Turlough likes who he has become. To have empathy like he does with the Ringpull people is a novel sensation for him. He experiences a wave of giddiness at the thought of worlds within worlds and the sheer strangeness of relative dimensions. He’s bitter and cynical for someone so young. When he is in a prison cell whilst his friends roam free there is a niggling sensation that things perhaps haven’t been straightened out with the Doctor over the whole Black Guardian/trying to kill him incident. His youthful arrogance had gotten him locked away on a ship in a universe no one even knows about. Turlough is convinced that the Doctor will save him at the last minute if he is executed and Huxley brings up the fate of Adric – and that is somebody that the Doctor cared about. Neither of his companions place much faith in him and ultimately he will always be on his own.

An English Gentleman: He’s a brilliant improviser and his loyalty shames Turlough but he is hapless sometimes. The Doctor was actually scared of the artefact that they found on Must. With him you know its serious when he dons those glasses of his. His voice goes shrill at moments when he is striving to get his point across!

Mouth on Legs: Tegan will argue the toss all day long but she will always trust the decisions the Doctor makes eventually. She looks at Turlough as though he doesn’t have any feelings aside from jealousy and greed. She swears her novelisors sounds just like her Aunty Vanessa, cheering her on, judging her and getting on her nerves! As usual she was bitching and moaning (Turlough’s words, not mine!) about where they had landed before they even stepped out of the ship! When Turlough tells the Doctor that he is sick of being the fetcher and carrier he says that Tegan wouldn’t know what to look which makes her look thoroughly piqued! She’s brash but she’s also quick on the uptake. This is bloody brilliant this bit – when Wolfe started narrating her swearing and stomping match she gave him an almighty shove!

Standout Performance: You will have never heard Mark Strickson have so much fun playing a Doctor Who script as he does in Ringpullworld. I don’t mind too much that he seems to age the fifth Doctor about 30 years and Tegan gets a hilariously awful Aussie accent because Magrs’ gets the characterisation of all three so spot on they come alive in unexpected ways. Alex Lowe has a gorgeous voice for audio, I was mesmerised every time he opened his mouth and the way he (and doing his part Huxley) bring the story to life so vividly is not to be undersold. The way these two actors finish each other’s sentences and handle such quick successions of dialogue is impressive and they share some of the best chemistry we’ve seen between two actors in this range yet.

Sparkling Dialogue: ‘The infinite tin of beans!’
‘I’ll hasten it along with a quick jump cut…’
‘Which left Tegan and the Doctor and I free to spend some moments shouting at each other!’ – hahaha!
‘I don’t think Tegan is the best point of view in a scene like that!’
‘That’s what we call a cliffhanger. Its about narrative suspense’ ‘It’s a cheap trick!’
‘Isn’t the joy of storytelling the joy of seeing how it all turns out?’

Great Ideas: The idea of the novelisors whose very existence is made up of chronicling people of great imports lives is brilliantly imaginative with some shavings of genius on the part of Paul Magrs. It is exactly the sort of concept that can allow him to bring all manner of post-modern narrative touches to a story that he excels at (‘This is a handy plot point for later as it turns out so I thought I’d mention it here…’).

Its not only wonderful science fiction but it’s a great audio device too allowing Huxley to narrate Turlough’s actions and give us a strong visual element than usual but from a very personal perspective. They are from Verbatim Six and their lot in life is to seek out somebody appropriately interesting and form a symbiotic relationship with them. All the novelisors can hear each other and they all add their own strand to the ongoing narrative of the universe. The gateway between this universe and their own looks uncannily like a Ringpull on a tin. Ever since they had been to the Death Zone on Gallifrey there seemed to be a bug in the TARDISes systems and their landings have felt quite random. Huxley doesn’t think that Wolfe is quite up to being one of the Doctor’s novelisors and there is a feeling of jealousy that he got Turlough instead. The creatures inside the micro universe look like a cross between hermit crabs and jackals if you can get your head around that one! In the misty dawn of time so long ago that your mind cannot even cope with that sort of scale, the BeyanHofreyAnat sector was amazingly advanced for its time and the dominant race was aggressive creatures who were keen to exploit the worlds around it. They rampaged across the terrified territories of their neighbours and the systems met up to see how they could annex the creatures and stop their progress without engaging them in hostilities. The Dark Ones would help them but only if they could exact a terrible price. The Lord of the Dark Ones gave them the device of their salvation – a banal looking tin which contained the twisting of logic and rationality and the bending of all physical laws. The gift of dimension transcendence had been brought into the cosmos. The Novelisors can provide a service called Prolepsis - the art of the flash-forward, describing possible futures. They charge a fortune for their services and most people are very happy to pay up to have their lives remembered for posterity. Huxley channels his thoughts into Turlough’s so he can see the third possible alternative and tell the story himself.

Musical Cues: The music matches the bouncy direction of the piece and uses plenty of cheerful piano motifs to stress the cheerful mood. For an example of how good the music in Big Finish Adventures can be go and listen to the gorgeous theme that leads up to the end of episode one – its racy, quirky and terrific fun. Turlough’s narration of part two is buoyed up by some more punchy music suggesting the epic scale of the events from the Dark Time.

Standout Scene: The story plays out the entire climax of the story over ten minutes of running time with a happy ending for everybody as a possibility….before denying us an actual ending so you have to choose one for yourself, the ultimate in audio choose your own adventure. Just unforgettable.

Result: Colourful, fun, imaginative and extremely pleasurable to listen to, Ringpullworld is Paul Magrs at his creative best. With two people telling the story at once you get some marvellous narrative tricks and commentary and with three possible outcomes laid out all bets are off as to which one will take place! I get the impression that Paul Magrs is a big fan of the Davison era because between this and The Boy The Time Forgot he has managed to conjure up the most important voices of the era with absolute clarity and even more excitingly has some fun with them too! It has one of the jolliest musical scores I’ve ever heard and it adds a great deal to the production. We get to see a peek into the best possible future which leaves the listener so elated you are convinced that it is the real one before that is snatched away and taken to a precipice of suspense as the possibilities are all we have to end the story on. Its both unbelievably cruel and punch the air brilliant to end the story on that note and as such lets end this review on an equally ambiguous ending of three possibilities. One where I give this story a 3/10 where everything in this review holds but loses so many marks for letting me down so badly and not providing an adequate conclusion. One where I give it a 6/10 for providing some real giggles but not quite managing to hold itself together. And one where it gets 10/10 for being bold and brilliant and dazzling. But I’m not going to make that decision. The future is all yours.

Buy it from Big Finish here: http://www.bigfinish.com/405-Doctor-Who-The-Companion-Chronicles-Ringpullworld
Posted by Doc Oho at 23:48