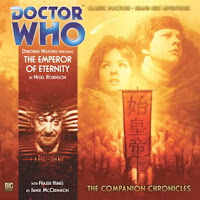 What’s it about: After colliding with a meteor in space, the TARDIS is forced to make an emergency landing on Earth. The place is China around 200 BC, during the reign of the first emperor, Qin. When the Doctor is taken away to the imperial city, it’s up to Victoria and Jamie to save him. Their friend is now a prisoner of Qin, who intends to extract the secret of eternal life, so that he may rule the world forever…

Victorian Orphan: Robinson seems determined to shoehorn Victoria into a very unusual role – one where she is far more confident and assured than she ever was on TV. Trouble is I could never reconcile her portrayal here with the whimpering girl on screen and he also made some odd choices of phrase that I cannot imagine coming from the scared orphans mouth. Poor Victoria, it seems like she is destined to face one horror after the next. In some ways I am surprised the gentle young lady lasted as long as she did! Here she is confronted with a field piled high with corpses! I think Victoria is made of stronger stuff that even she realises. Regardless I really don’t think Victoria would have the guts to stand up to an angry mob and condemn them even with her friends backing her up. People are curious as to who she is and wonder if she is the Doctor’s concubine. When Victoria says that she thinks that there is good in everyone, even the demons that killed her father I wondered if Robinson (who is clearly a massive Doctor Who aficionado given his hand in all manner of Doctor Who tie in titles – including my personal favourite when growing up The Doctor Who Quiz Book!) understands his characters at all. ‘But Jamie that’s all circumstantial!’ cries Victoria in a scene full of dialogue that sounds unnaturalistic for her character.

Sexy Scot: Upon hearing they are near Tibet Jamie wonders if there will be any ‘great hairy beasties’ about – any chance to get the young Scot to say his famous line!

Oh My Giddy Aunt: He cannot promises to control the TARDIS with any great accuracy at the moment but Jamie wonders what’s new there then. If they were spies would they really dress in such preposterous clothes? The Doctor brings knowledge to the Emperor which is much more impressive than immortality. Only the Doctor would try passing off rice pudding as some kind of immortality potion!

Standout Performance: Some actors have natural voices for audio and some don’t and the difference between Frazer Hines (who sounds silky and very natural) and Deborah Watling (whose voice is harsh and at times unpleasant) is extraordinary. Watling isn’t the most natural of readers and her voice becomes hysterical when she reads certain stressed lines of dialogue and when sharing dialogue scenes with the smooth voice of Hines it jars terribly. When Victoria is said to have coughed on grey fumes Watling lets out the tiniest, most pathetic little whisper of a cough you have to wonder why she bothered.

Sparkling Dialogue: ‘Eternal peace for eternal terror? Where anyone who doubts him is burnt alive?’

Great Ideas: The TARDIS had deflected a meteor in space and it had fallen on Shang-Tu which the inhabitants think is a sign of the Gods’ anger.

Audio Landscape: Howard Carter deserves a massive round of applause for his sound design in this story because Hines aside he pretty much holds up the whole atmosphere of the piece with his exceptional sound effects. Thunder, birds crowing in the night, walking on gravel, the rousing crowd, decapitation, whinnying horse, echoing footsteps and trickling water, leaping over stepping-stones across mercury, the Doctor playing his recorder, the polite chatter in the court of the Emperor, a bubbling cauldron over a crackling fire, screams in the prison, the lashing storm, Li’s screaming men.

Musical Cues: There are some pleasing exotic notes to the score but I would pushed it to the limit to help bring some real life China to the story with a script this bad. Think of The Aztecs – which has a bloody good script – but the music added to the overall experience so evocatively.

Isn’t it Odd:
· I don’t feel that Nigel Robinson (who did a sterling job bringing Morris Fahri’s Hartnell historicals to life in The Lost Stories range) is a strong enough writer to conjure up an original historical tale. When I visit history in Doctor Who and especially history as rich as this period I want to be enchanted and educated about the culture but The Emperor of Eternity might have well have been told in space for all the concessions it makes to its chosen civilisation. Go and listen to Marco Polo or read David A McIntee’s The Eleventh Tiger and there you will be beguiled by the fascinating customs and sensuality of Chinese society – as far as this story is concerned it is just some background colour for a very clichéd Doctor Who story. Robinson is telling a worker day Doctor Who tale but screaming in the background ‘buts it’s interesting because it’s set in China!’
· Because the culture isn’t whipped up with any romance slamming meteor down in its heart feels like an entirely pointless exercise – there’s no drama if you are suggesting a dramatic change in a society this bland. Just how dull was it before this?
· The mechanics of the plot (‘We had been betrayed!’ ‘How on Earth are we ever going to rescue the Doctor!’ ‘If only we could get back to the TARDIS!’ ‘Where we being followed?’ ‘Li’s tricked us and led us straight into an ambush!’ ‘No Victoria we can’t leave you!’) are such lazy Doctor Who clichés you could almost make the plot up out of the Terrance Dicks build your own narrative book where he gives you seventeen plot points and within them you can make up the bare bones of any traditional Doctor Who story.
· I feel like I’m kicking a dopey looking puppy but even the cliffhanger is achingly predictable, being signposted with big neon arrows.
· ‘And yet he made not a single movement. Uttered not a single cry!’ – this dialogue is very dodgy in places. ‘I was about to say he should have jolly well thought about that before he started his evil reign!’
· No matter how much he stresses to the contrary you never feel that the TARDIS crew are in any danger. Its effortlessly easy to get into the Palace and to escape and getting back to the TARDIS is a simple task.

Result: I’m sure there is a gripping story to be told about saving the Emperor of China from being assassinated but The Emperor of Eternity simply isn’t it. Robinson’s approach to storytelling is so lacking in ambition it hurts, his plot relies on co-incidences and the right characters just happening to turn up with information and there is an abundance of ‘choose your own adventure’ Doctor Who clichés I could have almost have plotted the story in my sleep after the first five minutes. Making things even more jarring is Deborah Watling’s discordant reading which sounds unrehearsed and unnaturalistic and is not aided by the fact that Robinson doesn’t capture her character with any accuracy. Unfortunately it takes more than a few exotic descriptions of a palace to conjure up a culture as dazzling as ancient China and it feels as though Robinson has skimmed a few Ladybird books and taken a few scant details to add colour to his story but it never once feels like he understands the society like Lucarotti, Whitaker and the best of the historical writers do. If it sounds like I am being especially harsh it is because I can see real potential in what Robinson is aiming for but it fails to reach any of its lofty ambitions. Honestly it takes more than a few beheadings! Sterling sound design and music as usual but overall this is very disappointing: 4/10

Buy it from Big Finish here: http://www.bigfinish.com/408-Doctor-Who-The-Companion-Chronicles-The-Emperor-of-Eternity
Posted by Doc Oho at 15:45

Listened this audio just today. At first I was a bit skeptical about your verdict, it seemed to be too harsh. I liked the beginning of this story quite much, but then - alas - it became too ordinary and not very effective on any level. I can't imagine here young and beautiful Victoria, seems that some sort of old spinster is having adventures with Jamie. Truly that's a missed opportunity, because stories set in exotic countries do have a lot of rich and vivid potential.