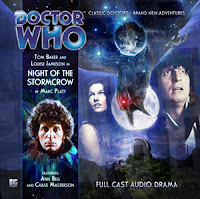 What’s it about: High atop Mount McKerry sits the observatory. For years now it's been watching the skies. Now something's watching back. Something dark and huge that blots out the stars. Something with giant wings. Something that kills. When the TARDIS is struck mid-flight, the Doctor and Leela crash-land on the mountain to find they are not the only aliens to be visiting. Beings of nothing infest the complex, staff members are dead or mad. As the survivors argue amongst themselves and attempt to take advantage of the situation, a creature vast and terrible is coming ever closer. A creature called... Stormcrow.

Teeth and Curls: Daggers at dawn are never the answer, the Doctor informs Leela. I loved the gorgeous moment where the Doctor mentions that he spotted a body ages back hanging from a tree. Marc Platt writes the character as somebody who is apparently fatuous but actually a keen observer. This isn’t just Tom playing at Tom Baker having crazy adventures, it’s a wonderfully sinister performance of a Doctor who understands the severity of the situation and wants to help. More like this please. When he says there are things in the universe that human beings aren’t ready to know about he is accused of being condescending but he comes across more like he is trying to warn them (I got a pleasing Planet of Evil vibe). He’s retained some of that dark wit that served him so well in Horror of Fang Rock, informing everybody that they are all in the most terrible danger with a smile on his face. Almost as though these are the days to live for! Rather gorgeously the Doctor suggests in a pause in the action that they stop for some toast. Nice to see he has his priorities right. He’s seen to be a keen observer of psychology too, bolstering everybody’s spirits with a cheery tone whilst quietly spelling out the real situation to Leela on the quiet. When the shadow creatures attack Leela the Doctor growls furiously for them to get away from her. Its lovely to see him behave in such a protective way towards this companion because often on television he showed a complete indifference to her safety. It’s the sort of rectification that Big Finish excels at. Bad feelings are like bus timetables, not something that you should rely on. The Doctor refuses to fight with weapons when he has a Mrs Beeton jam jar to hand! Its almost like a slap around the face of a loyal audience when the Doctor declares that he is sick of stupid girls and their endless questions and that he wants his TARDIS to himself. It’s a reminder of how acerbic this Doctor can be when he wants to be.

Noble Savage: I make no secret that I think that of the two regulars to prop up the 4th Doctor Adventures last year Louise Jameson was by far the standout. There’s just nothing she cannot achieve if she sets her mind to it (except overcome some of the distinctly bland material that the first years was constructed out of…hopefully to rectified in years two and three) and she is equally adept at both comedy and drama. Leela is such an emotive character, experiencing everybody for who they truly are (reading their body language) rather than how they wish to be perceived (what they are saying) and he lack of sophistication never means a lack of intelligence. She’s one of the most resourceful of companions, Leela, and the funniest but it is her dramatic portrayals (Wrath of the Iceni) that really stand out. For Big Finish to commit an actress of Louise Jameson’s calibre to a subscribers freebie is what I consider pulling out the big guns to secure an audience for the 50th Anniversary. Leela has a quiet reverence for the TARDIS which is instilled in her by the Doctor. The discussion of scientific principles between Leela and the Doctor (in this case a telescope) is as intelligent as ever, simplifying the complex and allowing the audience to look at things from a fresh perspective. Its worth listening to this just for Leela’s pronunciation of pizza! Apparently she was raised on the slopes of Mount Olympus by a troop of itinerant girl guides! Wonderfully its Leela who is offering out the Jelly Babies in this adventure and pointing out that they aren’t real babies (and she’s right…the red ones are the best!). Her knife most certainly was not meant for buttering toast!

Standout Performance: I’ve not had a chance to listen to The Shadow Heart yet and so this was my first exposure to Chase Masterson on audio but not as the character that she will be associated with (Vienna, soon to star in her won series). She’s certainly rather impressive here, underplaying a role that could have been horribly over the top in other hands. As soon as Peggy suggests exploiting the Doctor and reaping the rewards of his efforts she was never going to get a happy ending.

Sparkling Dialogue: ‘Something found you here. Something from the darkest corner of the night!’ – to have Tom Baker with all the gravity he commands saying lines like this is a delight.
‘Eat your heart out Fanny Craddock!’
‘I’m sick of your ungrateful little planet!’ – this sounds like it belongs in Christopher Eccleston’s mouth and is biting coming from Tom Baker.

Great Ideas: What a wonderfully gothic opening set high atop a mountain in a scientific observatory like a hybrid of so many Doctor Who tales, this feels precisely like it could nestle very comfortably in season fifteen before Robert Holmes left the series. The isolated location on an island belongs to Horror of Fang Rock and the scientific laboratory comes straight out of Image of the Fendhal. There’s really nothing wrong with playing about with clichés when its done as well as it is here. There is something orbiting the Earth every evening that all scientific equipment fails to pick up aside from the Optical Telescope. When a living creature dies there are always scavengers waiting to pick over the carcass and its no different with planets except the scavengers are bigger. The Storm Crow is a scavenger waiting to feed on the pickings of the Earth. Circling the planet for a millennia, always on the dark side, always running from the sun and always waiting to feed. I’ve always complimented Marc Platt on his devilishly good imagination and this is one of his most ingenious concepts yet. This comes from the same warped mind as that which created Ghost Light and Lungbarrow.

Audio Landscape: If you are going to write a horror story then you need a sympathetic director who is going to exploit every opportunity to make the audience jump out of their seats and I’m pleased to say that Big Finish supremo Nicholas Briggs achieves just that. He punctuates scenes with screams and explosions and growls that come from nowhere and left me a dribbling wreck whilst listening to this tale in an insomniac slumber in the wee small hours of the morning. Moaning in the observatory, made comparable with the growling of the TARDIS materialisation, walking on gravel, equipment crashing to the ground, tearing the roof down, destroying the telescope, gunshot, the vicious pecking of the Storm Crow.

Musical Cues: I love the use of the piano in the score to stress the moments of drama. Its used sparingly and discordantly by Jamie Robertson to drive home the acrimonious twists in the plot. The music becomes highly infectious as the plot accelerates in the final episode, especially in the scenes as the helicopter approaches. That man Robertson is a genius.

Standout Scene: In a beautiful moment of reflection, Leela discusses where she came from and where she is going and wonders if she will ever discover where she truly came from. Its another star turn from Louise Jameson who can pull at the heartstrings without ever appearing to manipulate you. Its touching because Leela is a character with such dignity, and Jameson pulls that off superbly.

Result: Over the past few years Big Finish have gone all out to ensure that their free subscribers story has been something memorable and this might just be the best example yet. You’ve got a decent mystery with the opportunity for lashings of audio atmosphere, a strong role for both the Doctor and Leela, lots of intelligent detail in the dialogue and a very satisfying final episode. It might just be the most fulsomely written and realised 4DA yet and its absolutely free! My only complaint is that none of this terribly original but sometimes you have a hankering for nostalgia and this caught me at just the right time and with a pace as lightning fast as this and the manifest of resources thrown at the story (some great performances, a bolstering Jamie Robertson score and plenty of jump out of your seat moments from director Nick Briggs) I really can’t complain. Its also an increasing sign that Tom Baker has found his feet with Big Finish, offering up a measured performance that allows him to expose many facets of the character. My suggestion given the mixed form of the Main Range Adventures (although with Mel’s introductory story coming up and it being the 50th Anniversary they may have been saving all the best stuff for next year) this year it would be best to start a Companion Chronicle subscription to obtain this excellent free story. If anything, the Chronicles are by far Big Finish’s best consistently good Doctor Who range offering a diverse range of stories and a chance to see what so many Doctor Who performers can achieve on audio. But that’s just my tupenny’s worth. Night of the Storm Crow is a terrific little tale and it’s a shame that this standalone slice of conceptual horror couldn’t have opened the 4th Doctor/Leela adventures for Big Finish rather than Destination Nerva. If you haven’t dipped your toes into that range yet then start with this. It will certainly give you a hankering for more adventures with Louise and Tom: 8/10
Posted by Doc Oho at 20:39

Well I paid $8.99 for it, but it was a bargain at that price. Tom Baker is as good as he's been so far (I've only heard the first two series of 4DAs) and Jameson is great as always. Even a relative BF neophyte like me (only 150 odd stories under my belt) can tell she is one of the studio's greatest assets.