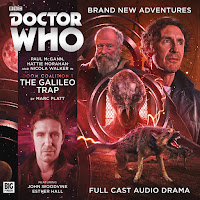 What's it about: Helen Sinclair doesn't know what hit her. One moment she was trapped in a dead-end job in 1960s London, and now she is transported back to Renaissance Italy over three centuries before. Florence is a city in turmoil. A new plague stalks the streets. A ferocious behemoth rampages through the vineyards. And Galileo Galilei, celebrated scientist, astronomer and old friend of the Doctor, is imprisoned in his own villa for heresy. But why has Galileo summoned the Doctor? Who are the mysterious Fortuna and Cleaver? Why have they been sent to Earth? And what is Galileo's secret? Is it the last thing he saw before he went blind?

Physician, Heal Thyself: Paul McGann is still buoyed up and showing no signs of fatigue with this new running storyline and set of companions. As discussed before he is a performer were his engagement with the material is obvious. If he's lacking interest he can tend to phone it in (but still to an adequate level to past muster) but if he is enjoying himself it is just about the finest audio experience you can have with any actor playing the Doctor. The Doctor would like Helen to surprise him and not be one of those companions that always runs off and gets themselves lost. The Doctor has lost his cares for anachronisms, nowadays he says stuff the ethics and help people even if it is using equipment out of time. It's a far cry from his Charley Pollard days where the Web of Time ruled the roost. He's come to renaissance Italy for the conversation.

Liv Chenka: Liv has gone from being the seasoned time traveller to a seasoned time traveller with a protégé. She has the sort of personality that adapts well to this kind of situation and a kind nature. She offers hints and tips throughout Helen's first trip in the TARDIS about how to avoid being irritated by the Doctor and how to take it all in. There isn't a hint of jealousy at the idea of the Doctor taking on a new female assistant and I really like that.

Helen Sinclair: When the only holiday you have ever been on is a holiday camp in Jersey then travelling in the TARDIS must seem like a dream come true to an inquiring mind like Helen's. It's her first full adventure as a traveller in the TARDIS and it looks like she isn't going to take to it quite as swimmingly as Liv did. But that's nice, it's nice to have a contrast especially as they are travelling together. We have upcoming adventures with Tegan and Nyssa but I can't remember a Doctor/female/female dynamic since 5/Peri/Erimem. Even something like a peach from another time zone can blow your mind when you are unused to time travel. She experiences culture shock at the thought of being so close to a recognisable historical figure. I can relate, it's not like it is a situation that you would ever imagine finding yourself in. The Doctor gives Helen the choice to stay behind at the end of this tale now she has seen how dangerous it is. He is going to be pursuing the Eleven and things will get even more fraught with danger. She might never have the chance to return home to Earth. It's a huge choice to make but I think she had long made up her mind already.

Standout Performance: Welcome back to the world of Doctor Who, John Woodvine. I found him an absolute pleasure to watch in The Armageddon Factor (mind you I am one of the flag wavers for the that story, championing it from the shadows) as the officious and menacing Marshall and he's equally delightful in this story as Galileo with a voice that was born for audio. Gruff and full of rich character. You need a good, strong actor in a part like this and Woodvine fits the bill perfectly, easing out the nuances in the dialogue.

Sparkling Dialogue: 'When you're old and disgraced and alone in the dark even half a hope answered is better than none.' 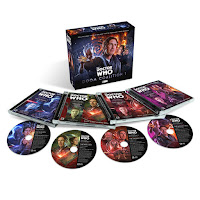 Great Ideas: I really liked how Platt didn't labour the historical elements, he presented them as facts rather than attempting to build the entire story around them. Galileo will not stay silent on the issue of the Earth circling the sun, even if it makes him an intellectual exile. He's discovered a new planet but he dare not tell anybody about it - he's already in deep water for his previous theories. The church would crucify him. The planet is between Mercury and the Sun and it was so powerfully bright that it burnt out the strength in his eyes.

Standout Scene: The scene of the Doctor flying out amongst the stars is simply delightful. Paul McGann sells the Doctor's wonderment perfectly and I love that the Doctor has this moment with a figure as important as Galileo. It's not often he gets to experience something totally new in this long life of his and this is one of those times.  . How this sequence and the idea of a rogue planet in the sky ties in with the Doom Coalition series ensures that this story was a necessary piece of the puzzle.

Result: Sometimes a writer and a story fit like a glove. If you were to lay out the names of the most prolific Big Finish writers (and there are nine or ten of those) and told me to identity the writer most suited to writing a story about Galileo I would have immediately chosen Marc Platt. His Doctor Who is always more intellectual and less about putting across an action movie on audio. It makes a nice change to listen to something with a little more substance than usual and this is a massive departure from the more typical Doctor Who run-around (which despite being very good examples of the first two stories of this set were). I really enjoyed the atmosphere of this piece, walking around in history and soaking up the sounds of Renaissance Italy which were expertly handled by Wilfredo Acosta. Shut your eyes and imagine you are there. The pacing is deliberately sluggish so you can savour the atmosphere and sample the delicious dialogue and the gentle character work done with Helen and Liv is lovely. It starts much better than it ends because the latter half drops the sightseeing in favour of the plot, which isn't going to set your world on fire but it does have a few tense moments. If you didn't like Point of Entry or Paper Cuts also by Platt then this might not be for you. It has the same sedate pace, attention to detail and rich character work as those stories. I loved them both so this was precisely my poison and after an exhilarating dash on Gallifrey and a creepy horror it pushes the Doom Coalition series into another direction that really shows its diversity. It's not perfect by any means but it is another winner in what is turning out to be a consistently strong series: 7/10

You are totally right about Paul Mcgann performances in relation with the material. Remember his half asleep deliveries during the divergent universo days? Or how he sounds totally pissed off in Scaredy cat? (that audio is a special pet peeve of mine). In Doom Coalition is a delight to listen! I hope they keep up the good material in future releases.
I absolutely loved Helen's reaction, it was so refreshing (similar to the genuine thrill Rose, Martha and Donna had travelling to the past for the first time) usually new companions get immediatelly caught up in the Doctors aventures (Flip, Lucie, Molly, Liv,Constance) that the plot doesn't allow them the simply pleasure to be thrilled and exhilarated at the simple fact of exiting the TARDIS and realising they are in another time or another planet.