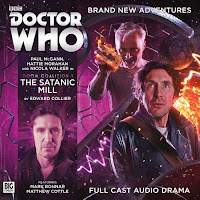 What's it about: The Satanic Mill - a vast Victorian factory floating in the deep of space. As the Doctor closes in on his quarry, long buried animosities come boiling to the surface on this ancient and powerful satellite, in a final confrontation that could have unimaginable consequences. And even that is only the beginning...

Physician, Heal Thyself: It's safer to keep the Doctor's companions alive because if they are killed he becomes irrational and more dangerous. Well thank you for that astonishing insight into his character. Wouldn't anybody be? He's always happy to disappoint, which is a good because he doesn't do much which is worthy of note. Is he handicapped by a sense of moral superiority. The Doctor excepts no responsibility for the people that Helen has saved, perhaps as an example to her of her own personal responsibilities as a time traveller.

Liv Chenka: Why does Liv travel with the Doctor? Because he has saved her life more than once, although the first time she met him it wasn't this Doctor. It was another one.

Helen Sinclair: Being educated and female in the 1960s doesn't give you the best opportunities in the world and travelling with the Doctor disposes of a lot of those prejudices. She can be seen on her own terms and unafraid to show what she is really capable of. Maybe secretly she wants her life to be in danger, the thrill of living for every second.

Standout Performance: The most memorable performance again is Mark Bonnar but for a very different reason this time. It just goes to show how the strength of the script and the direction can completely alter the effectiveness of a performance. Where Bonnar was genuinely manic and disturbing in The Eleven, here he is simply a snarling, stereotypical bad boy raging at the universe. It appals me that nothing was done to explore his characters psychological condition (when there were four hours to do so in) but I guess there is still time for that in the future.

Sparkling Dialogue: 'The trap one sets ought to be appropriate for the pest one hopes to eliminate.'

Great Ideas: The control of an individual through the implementation of words. The entire facility is built into quadrants and each quadrant generates a shift of workers. This facility is from the Dark Time, the misty dawn of Time Lord history. A stellar manipulator can focus enough energy to destroy a star. The Eleven reconfigured (changed the factory settings hoho) into a Victorian factory suspended in space. The Regeneration Codex has been tucked away in the Omega Vault, the Eleven found it and used it to lead him to this long dormant stellar manipulator. The Doctor is to be exposed to the sun to die slowly and painfully with no regeneration. As he dies the energy released will power the Omega device and the Eleven plans to destroy the entire solar system. He'll go down in history for this one. It's not like anybody hasn't tried it before. 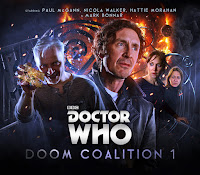 Isn't it Odd: Given the first story touted this as a pursuit through the universe of the Eleven, presented as a fascinating new villain from Gallifrey, he has been conspicuous by his absence since his introductory story. The chorus of Eleven followers sound decided half-hearted when singing their hymn and I detected the voices of the Doctor and his companions in the throng, indicative of the lack of extra actors to make up the crowd. The last time we heard a bunch of zombies singing a tune it was the Bernice Summerfield adventure The Worst Thing in the World and it was delightfully funny. This was the antithesis of that. I rather felt like we were dumped in the Satanic Mill without much of an explanation of what it was about. A vast Victorian factory floating in space is a great idea but without the appropriate fanfare it's just another bolthole for a villain. The reunion between the Doctor and the Eleven is so anti-climactic I'm not even sure why they bothered to bring together again at this point. It's like two people who aren't really interested in each others existence coming together for a chat. They can't even muster basic enthusiasm for their rivalry. Time Lord science threatening the universe? The Doctor's death imminent as he is hooked up to Gallifreyan technology? The Doctor's companions stirring up a rebellion? Surely this is Doctor Who 101. Original thought has left the building.

Result: 'Witness the rise of chaos and the rise of the new universal order!' Yes, I'm afraid that's how tedious this set ultimately turns out to get. Astonishingly poor, the first half of The Satanic Mill is confused, rambling and probably some of the least engaging material I have heard in some time. It reminded me of Excelis Decays, a tedious location, lots of electronic warbling and not a great deal of explanation or character. Given where the Doom Coalition box set started that is quite a nose dive in quality. The Eleven has gone from being an astonishing concept to a ranting villain who chews the scenery at every opportunity. It appears that his psychotic persona gets most of the air time and dishes out empty threats as a matter of course. There is a great deal of work to be done to salvage this character in the second box set. Even with the weaker scripts that he is handed Ken Bentley's direction is usually enough to provide some level of entertainment but it feels as though he has done as little as possible to The Satanic Mill to make it an enjoyable experience. The sound design is uncomfortable to listen to, there isn't much of a score and it sounds like he has left the actors in the booth to get on with it whilst he works on another, more important, story. This is the last story of the first box set, the culmination of where this has been head and the stepping stone to the second. It's possibly even more important than the introductory tale and yet it feels as if everybody has had enough at this point. Even the regulars sound less enthused. Edward Collier really couldn't make a dazzling idea for a location sounds more boring. The economic synopsis promised much but the story itself delivers so little. The Eleven's plan is ultimately very boring, reliant on tedious Time Lord technobabble to bring a grandiose scheme to fruition. He's just a poor substitution for the Master after all. I fail to understand how this sort of thing can transpire, where a dazzling new eighth Doctor box set can kick start with such a leap in the air and then fizzle away to a limp stumble at the conclusion. Surely the script editor could have coaxed something more engaging out of Edward Collier than this? I'm always moaning about the lack of new writers at Big Finish and to their credit they have taken a punt. Perhaps I should have shut my mouth: 2/10
Posted by Doc Oho at 01:51

"It appears that his psychotic persona gets most of the air time and dishes out empty threats as a matter of course."

Hmm, sounds a good bit like Alpha from Dollhouse.

Did you know you can create short urls with AdFly and get cash from every visitor to your shortened urls.