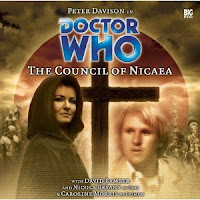 What’s it about: The year is 325AD. In the city of Nicaea, the first great Church council, called by the Roman Emperor Constantine, is due to begin. Here theology, philosophy and politics will be brought together for millennia to come. The Doctor, Peri and Erimem are there simply to watch events unfold. Gaps remain in the history books, and the Doctor has come to satisfy his curiosity. But none of them are ready for what greets them in Nicaea. Intrigue within the Imperial Palace has become violence on the streets. Mobs roam the alleyways and blood is spilt in the name of faith. Even in the face of murder and injustice though, the time travellers must force themselves to stay aloof. This is history, after all. Yet what is history to one person is the future to another. Is it possible for history to be rewritten? And if it can, can the Doctor afford to let it?

Fair Fellow: I take it all back. When I complained about the lack of dynamism between the Doctor, Peri and Erimem in Three’s a Crowd I did not expect these fireworks! This is high drama of the finest kind and once again courtesy of the Hartnell historical genre, hard questions causing a rift spectacular rift between the Doctor and Erimem. The Doctor as ever is firm that history must be allowed to run its course and has never been confronted with such a violent counter argument to this doctrine. He tells her that history is tough and most of the changes that they make are swallowed up in the vastness of the whole but some events shape history to such an extent that they cannot be changed. When Erimem turns her back on him, determined to make a difference he warns her that if she stays he will leave without her. You can hear he is almost frightened by her confidence in what she can achieve and orders her in the TARDIS. After she stands up in the Council and defends Arius the Doctor is almost hysterical with anger at that she has behaved so irresponsibly. You have to wonder for a while if things can ever be the same again between them. On a lighter note the Doctor comments that he and Peri have slept in stranger places (dirty get). He wangles himself a position on the council and working for Emperor Constantine. He has always been interested in the reign of the first Emperor to embrace Christianity and has studied it thoroughly but never visited before. He’s a time traveller, fast bowler and biblical scholar! Hilariously he gives a Euro to a stallholder in exchange for information! Peter Davison gives a typically stellar performance but this time he goes the extra mile, seeming to appreciate the dramatic material he has been given.

Busty Babe: You would think with all the sparks flying between her two friends that there wouldn’t be any time to explore Peri but you would be wrong. She steps from the TARDIS a right stroppy mare, even the Doctor comments does she have to be so pessimistic all the time? I loved Peri’s reaction to the reason they are fighting: ‘That’s it?’ and she laughs hysterically, genuinely astonished that they could get so violent over such a little detail as how Jesus Christ came to be. The way she dismisses their cause makes her sound almost religiously intolerant. Her mom was a Baptist and she was forced to go to church. It’s a very uncomfortable position for Peri trying to keep the peace between her friends and at times she sounds like a frustrated little girl screaming at her parents to stop sniping at each other! She tells the Doctor that if he thinks it is important to stop Erimem she believes him. Peri puts herself forward to try and explain the situation to her friend who throws everything she says back at her. Rightly this makes Peri furious telling Erimem she has always cared for her and she’s only trying to look after her now. Erimem calls her a puppet of the Doctors! When Peri is locked up in Constantine’s prison she knows the Doctor wont abandon her. The Empress plies Peri with wine to get her to talk but all she reveals is that she isn’t religious and she doesn’t think it is fair to be punished for speaking your mind. Peri wants to know what happened to the Empress who looked after her despite her ulterior motives and is appalled to discover she was steamed to death by her husband a year after they left.

Dusky Babe: Wow, Erimem has never made her presence more dramatically felt! When I first heard this story I was extremely impressed by her willingness to follow her beliefs and not simply tail after the Doctor like an obedient pet but on this listen I found her violent opinions almost too stubborn. It feels as though she has had these feelings for the Doctor and Peri bubbling under the surface for a while and the events have caused them to erupt. There are only a few moments though where this was a problem and on the whole this strengthens her character considerably, making her a force to reckon with! The warmth of the air, the smells…Nicaea reminds Erimem of Egypt. You would have to be blind to not see that Erimem was Egyptian. In her time the people obeyed, they did not debate politics and Erimem thinks it is foolish to involve the people but not to listen to them as it encourages dissent. Arius’ words reach her, she has seen too much oppression, too many tyrants and hypocrites manipulating people and she wants to make sure they get a fair hearing. Erimem furiously argues with the Doctor, demanding that he gives Arius a voice on the council. She asks a very pertinent question, ‘What is history? This is my future!’ and wonders why she shouldn’t be able to change it. In a punch the air moment she stands up to the council (and the Emperor) and criticises them fo 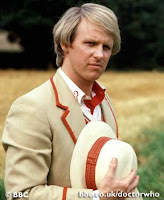 r judging a man without allowing him to speak. She proves to be a fantastic leader pulling together a force to discuss, not oppose the Emperor. When the guards burst in she thinks that Peri has deliberately led them to her. When Erimem confronts Constantine she calls him the worst kind of leader, speaking of forgiveness and reconciliation but acting with assassination and tyranny. Despite her good intentions it is Erimem’s vigilante act that causes things to be bloody. She is clever enough to deny Julius information about their supporters and their meeting place but doesn’t spot that he was after the information for her enemies. She will not betray her beliefs and feels she owes it to the people that have given their support to continue even after she has reconciled with the Doctor and Peri. She apologies for her actions and admits she had thought they had turned against her, clouding her judgement. At the end she is still not satisfied because she isn’t sure if Arius will get a fair hearing but is relieved to hear from the Doctor that he was welcomed back into the Empire. If she was in Constantine’s place she could have done a much better job but then she remembers there is more to leadership than ideals. This is fantastic development for Erimem, a really interesting examination into her moral code and willingness to stand up for people.

Standout Performance: I occasionally heard Mr Collins from David Bamber but he gives such an impressive, powerful performance it’s the silliest of observations. I have never heard Peter Davison and Caroline Morris so psyched up by their material.

Sparkling Dialogue: ‘That it is religion does not stop it from being a tyranny!’
‘It is what the Church needs. She cannot be always fighting! Ripped apart by squabbles within! She must be strong! Unified! One Church!’ – a very worthy lesson, especially today.

Great Ideas: In this period theology is something of a spectator sport, everyone down to the common man understands the theological debates of the day and has strong opinions. The argument at the moment is tearing the church apart, about the nature of Our Lord. Christ came to exist as an act of creation on Gods part says Arius, but the opposition claims that takes away the divinity of Christ. Constantine is trying to remain neutral but he will send in his army to pacify them if he must. This is Christianity and politics coming together for the first time. Peri inadvertently leads the Emperors men to Erimem forcing her to go on the run. Legionnaires are found dead and Erimem is leading a march to confront the Emperor to force him to listen to Arius. The Army is in place and it is all set for a bloodbath. Fortunately Erimem was wrong about the Emperor and he gives Arius’ cause a fair chance to be heard.

Audio Landscape: Crickets, a marching mob, bubbling fountains at the palace, legionnaires breaking down the door, smashing glass, a marketplace, groans and screams in the dungeon, treating a bloodied wound, the Army facing Arius’ crowd.

Musical Cues: I didn’t realise Russell Stone provided a score this late in the run. I like his gentle use of strings and the dramatic piano sting when Erimem is in trouble.

Standout Moment: The argument between the Doctor and Erimem at the end of part one is unforgettable.

Result: A powerful story that draws its drama from the characters by asking some powerful questions about religion and beliefs. The script is the most thoughtful and exciting we have had in an age and there isn’t a monster or corridor chase in sight. I have always loved the pure historicals and Caroline Symcox paints a gripping picture of Nicaea and gives an opinion to everybody from the lowest trader to the Emperor. It’s a superb story for the regulars as well, the Doctor fights to try and keep history on track and Erimem follows her heart despite who she might upset whilst Peri is desperately trying to keep them all together. Caroline Morris gives a dominant performance making Erimem’s righteousness a convincing condemnation of the Doctor being Time’s bitch. A welcome reminder of what Big Finish can achieve at its finest, ditching science fiction for gripping historical drama: 9/10

Buy it from Big Finish here: http://www.bigfinish.com/71-Doctor-Who-The-Council-of-Nicaea
Posted by Doc Oho at 05:23

This is one of my favorite audios, what always gets my goat though are the belligerency of those in power to use their power for their selfish ends and to be intolerant of ideals that oppose their own, this is very much exemplified in the arrogance and smug superiority of Athanasius. Frankly, I would have loved it if there was a scene where Eminem breaks Athanasius' arm or something equally painful. That would've been really awesome cuz i really wanted something terrible to happen to him in the actual story.

Stories like this make such a good case for pure historicals, I wonder why the show hasn't tried them in the revived era.