Three’s a Crowd written by Colin Brake and directed by Gary Russell (sweet bejesus…give someone else a go!) 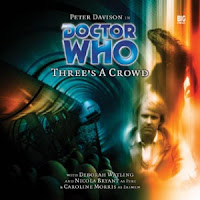 What’s it about: On an almost lifeless planet in a remote star system, Earth Colony Phoenix is struggling to survive. The colonists, utterly dependent on transmat technology and unable to leave the security of their Habitat Domes, have developed severe agoraphobia... not to mention an inability to deal with visitors... The TARDIS crew arrive on an apparently abandoned space station in orbit above the planet and soon discover that they and the remaining colonists are in the gravest danger. To survive, the Doctor, Peri and Erimen must uncover the colony’s darkest secrets before it is too late. Something inhuman is stalking the Colony… and it’s hungry!

Fair Fellow: Like the rest of the production the characterisation of the fifth Doctor is unmemorable. He doesn’t do anything; he wanders about for three episodes not connecting with the plot in anyway before wrapping everything up and leaving. Given Colin Brake’s low key handling of the 8th Doctor and Fitz in Escape Velocity and the second Doctor, Jamie and Zoe in The Colony of Lies I have come to the conclusion that writing Doctor Who just isn’t his thing. He fills his characters with mundane dialogue that lacks wit and intelligence (wait until we get to Peri!). The Doctor thinks the more the merrier, he’s very happy with this crew (although with Tegan it might have been too much of a good thing). He’s offended by the suggestion that he always lands the TARDIS on Earth. Has some experience with advanced computers. Rarely has he seen an operation that disgusts him as much as this. Brake even has him say ‘Brave heart, Erimem.’ Stop reminding us of Tegan! Oddly at the story’s conclusion he tries to convince Erimem to stay and help found the new colony. Twos company but three’s a crew (even Davison sounds embarrassed saying that).

American Attitude: Brake seems to be under the impression that all American’s are intolerant, stupid bullies. I am so glad that Peri is not a counsellor because she is shockingly insensitive throughout. My advice to any budding psychiatrists out there is that you don’t say the following things to an agoraphobic:
· ‘What you need is to get out of here and get a life!’
· ‘Get a grip!’
· ‘It’s like walking with my granny!’
· ‘Go straight up and you’ll hit that space station of yours!’
· ‘Its just moving air, don’t panic!’
Her brilliant advice to Erimem who is having doubts about travelling in the TARDIS: ‘Go with the flow!’ Her description of the Kellian: ‘It looks to me like some kind of uniformed reptile!’ Peri has been teaching Erimem to ice skate on the frozen swimming pool in the TARDIS. Already she has seen such fantastic things, things that she will remember her entire lifetime. Her brilliant advice to the Doctor is: ‘We can’t keep losing Erimem everywhere we go!’ And her overall advice to an agoraphobic is to go outside because ‘you shouldn’t knock it until you’ve tried it!’ Nice one, Peri.

Dusky Babe: Some attempts to follow on from the dramatic events of The Roof of the World but lacking any kind of delicacy or exploration. Erimem is still upset about the revelations about her father but she mentions it once at the beginning of the story and then it is forgotten about. She’s also uncertain about her future aboard the TARDIS and I find it hard to believe that the events of this story convince her so excitedly that she is desperate to see and learn on further travels!

Great Ideas (sometimes my section titles trip me up…lets just call it Ideas for this story): On phoenix colony, social time is a privilege and you have to choose your social partners very closely, once a month. They are happy in their personal spaces cut off from the rest of the world.

Three people make a crowded room! You have to achieve a certain physical fitness to make the journey home (why? That is never explained). This is a dead end world in a cul de sac star cluster (why did they choose here to colonise then?). The terraforming process has been delayed (but is magically finished by the end of the story!). The Kellian Royal Guard have turned the colony into a farm, sleeping colonists sent straight from the freezer for them to eat!

Audio Landscape: Birdsong, ducks quacking, motion sensor alarms, teleporting, blaster fire, eggs hatching, feeding on corpses, blowing up the ship. A distinct lack of set pieces to allow for any impressive sound effects, this is about as vanilla as it gets.

Musical Cues: The music is barely audible and lacks menace and excitement so its pretty much perfect for this story.

Isn’t it Odd: Oh dear oh dear oh dear… The opening scenes mimic the static soap opera TARDIS scenes that slackened the pace of practically every story and makes this story pretty much crawl backwards before it has even begun. Erimem’s hurt isn’t explored in any great depth, its just brought up and ignored for the rest of the story. Lorak’s ‘rehearsal’ dialogue before calling Belip was hopelessly fake and signpost that I was in for a cheesy ride! The first episode is completely devoid of events, they land in the dome and Peri and Erimem are so daft that the latter gets trapped inside a transmat booth and the former beams her away! Underwhelming describes the first cliffhanger - ‘I think your friend might already be dead!’ – supposition hardly builds excitement. A colony of people trapped in their bedrooms? Could you think of a duller location for this to take place in (aside from the weird dream spaces of Dreamtime)? I was very surprised to find that Auntie wasn’t an automaton because Deborah Watling stresses her dialogue like a mechanical version of Ross from Friends! ‘Such activity would result in bruising, Ms Peri’ – is Butler the original Kryten from Red Dwarf? His dialogue is so insipid! Whilst I have criticised Peri’s counselling capability you can understand her frustration, there have been very few character as wet as Belip. She’s an internet geek who is all talk online but freaks out if she steps at all out of her comfort zone. She spends so much time hyperventilating and having panic attacks that you simply want to slap her about the face with a wet haddock to stop her blubbering and remove her from the action! The colony leaders managed to hide the doors in everybody’s rooms by…putting rugs up on the walls over them! What? Nobody thought to have a look? If he is that starving why doesn’t the Kellian General simply shoot the Doctor and eat him rather than discussing his own weaknesses? In episode three the Kellian threat is revealed and there is still no danger! Auntie proves to be one of the most misguided and intellectually challenged characters ever to appear in a Doctor Who story. So the terraforming operation isn’t quite ready and she has a bunch of lizards on her doorstep so what does she do? She starts beaming over the colonists for them to snack on…just to distract them whilst the planet gets itself together! What the hell would she do to cause a distraction? Set off a nuclear bomb? When the Kellian then tell her ‘Don’t worry Auntie. We’ll beam your best and the brightest down…’ she doesn’t think hmm, perhaps not, after all they are munching away on three course colonists already…perhaps they’ll just use this as an excuse to fill up their larder! Stupid, stupid woman! ‘I wanted to be certain they would die!’ she growls when she realises she has been duped. She should have been killed with them for being such a dope. I realised at the conclusion that if this story picked up its pace it could have happily have told this plot in the first episode. At the close of the story suddenly the planet is ready to be populated and the colonists are all over their agoraphobia. What a load of sweaty bollocks!

Result: Not so much slow paced as no paced, Three’s a Crowd is the epitome of dullness. It features a colourless location, characters who are either as irritating as pubic lice or unbelievably thick, banal dialogue and a lifeless narrative. Some people might rate it because Deborah Watling guest stars but she gives a mechanical performance and is playing a wretched character, it is simply another disappointment. No more stories from Colin Brake please, he cannot structure a story and his scripting is so plain there’s nary a good line for anybody. We’ve seen Davison, Bryant and Morris produce wonders together (The Church and the Crown) but this and Nekromenteia is making me wonder if they have already outlived their value: 3/10

Buy it from Big Finish here: http://www.bigfinish.com/69-Doctor-Who-Threes-a-Crowd
Posted by Doc Oho at 17:48

I'm so happy that the several hints that this would be Erimem's last story didn't bear fruit. When the Doctor suggested she stay to lead the colonists, I nearly had one of Bellip's panic attacks.