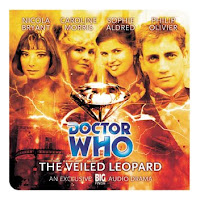 What’s it about: Four time travellers. Two missions. Who would you put your money on, Peri and Erimem or Ace and Hex?

American Attitude: This is the Peri I know and love; the good time gal who gets a kick out of her adventures not the bull-in-a-china-shop psychotherapist that we got in Three’s a crowd. Once again Peri is the seasoned traveller and she is mentoring Erimem, a nice parallel with Ace watching over Hex’s first mission. Peri is dressed up as an Egyptian and she is lucky to have the genuine article doing her make up. She says the Doctor is a good man but so English. Time travel for Peri is all about seeing history first hand, meeting people, smelling the air…and great parties! The Bond movies were a favourite with her and her real dad. We hear a little about Peri’s childhood, pushing a guy on Candy Tyler because he kept pestering her at the prom!

Dusky Babe: Peri asks if they teach boob jokes at Pharaoh finishing school? To pose as an Egyptian she would have to cut her hair off and she really enjoys having hair now. Finds high heels to be torture devices. It’s her first taste of champagne and the sensation of bubbles going up her nose makes her giggle. Walker is dressed up as her father and finds the idea offensive. Erimem recognises hunters scanning the room. If the guards at her palace had fallen asleep she would have had them executed! It is an insult to her father to let Walker keep the diamond.

Oh Wicked: The Doctor put her in charge so they’re doing it her way. Sophie Aldred feigns an appalling Scottish accent but mocks up a fair posh one. If this wasn’t 1966 she would show Walker how feisty she is. Where would she stash a mini transmat in her dress? I love Ace’s casual dialogue: ‘We’ve got the bloke wot tried to nick it!’

Sexy Scouse: My interest was piqued as soon as I saw Philip Olivier on the cover in a tuxedo, I shouldn’t let such frivolities turn my head but there it is. Is this the only time Hex feigns the stereotypical Scouse ‘Alrite! Alrite! Caaalm down! Caaalm down?’ It occurred to me at the beginning of the second episode that this was the first time we’ve heard Hex have some fun. He spent much of The Harvest stumbling over corpses of his friends and saying ‘oh my God’ and he got lost in the numinous nonsense that was Dreamtime. Putting Ace and Hex into the role of jewel thieves allows them to have some fun together and Aldred and Olivier share wonderful chemistry when they are allowed to let their hair down. With Live 34 and Night Thoughts coming up I think it might be a little while before I get hear them having a laff again. Hex asks if he can to Carry On crumpet jokes. He’s such a lad, faking a football commentary on his intercom (imagine that gorgeous voice commentating a match). Hex thinks Ace looks really nice in a dress (the flirt) but dressing up in a tux really is fancy dress for him. ‘Give me a break, I’m new at this!’ he says of Ace’s constant criticisms of his performance. He finds it a little overwhelming that the future of an entire civilisation is resting on him. Unfortunately Hex cannot pull off the English gentleman very convincingly! His Dad almost got the heave for falling asleep on the job once. I love his hand slapping attempts to hide; Olivier displays a surprising flair for comedy.

Great Ideas: What a great period to visit, Monte Carlo, 1966, all glitz and glamour! The idea of the fifth and seventh Doctors sending their companions to perform contradictory acts (obviously the seventh Doctor knows about his earlier incarnations acts but then he always was a devious little imp) is really fun and puts a new spin on t 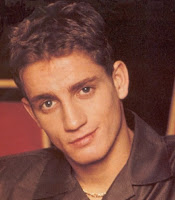 he anniversary multi Doctor cliché…multi companions! The Veiled Leopard is bigger the Colanor and the Star of India. The diamond used to belong to Erimem’s father; he took the stone, a wife and 1000 slaves from the king he defeated. It became known as the veiled leopard because of the flex in it, it was so pure it started to glow. When he died Erimem chose the diamond to accompany her father to the grave, which must have been defiled. There is a jewel thief that leaves a calling card with the head of the Roman God Janus, which turns out to be Lilly. She is some kind of Robin Hood, someone who is fighting back against low lives such as Walker, since she really is as wealthy as they say she has the items sold that she steals and distributes the money for those who need it. Playing the same events again from Ace and Hex’s point of view is lovely, giving a whole new spin on the story. The diamond isn’t a diamond, 10,000 years ago a planet went supernova or something equally as spectacular and they didn’t want their world to die out so they encoded everything in a crystal, all the genetic information about themselves. Half the races in the universe wanted the technology so the Doctor brought the diamond to Earth in the safe keeping of Egyptian royals. Turns out that Walker was behind the scam to steal the diamond all along, an insurance scam to make a fortune!

Musical Cues: There is a cheesy French accordion score in the first episode that wasn’t really my cup of tea, I much preferred the piano version of the second episode which I felt captured the heist angle more effectively.

Result: A great idea for a freebie, having Peri and Erimem make ensure a diamond isn’t stolen by Ace and Hex, which bounces along with some style but annoyingly fails to bring the two sets of companions together at the end. The setting is nicely captured and allows us to see all four companions letting their hair down and there are plenty of twists and turns that you expect from this kind of heist tale. I found that the explanation of what the veiled leopard really was quite intriguing but it’s a shame we never found out anything more about this civilisation, again the sudden ending denying us any closure. An amusing caper with a few niggles: 7/10 You totally captured my thoughts on the story. Great characterization, great concept, but in the end it... it kinda failed to live up to the promise of its premise. Not enough cohesion, if you ask me. I REALLY wanted the two pairs to meet at the end, so I, too, was totally disappointed when they didn't.

Great reviews, sir. Your blog is one of those rare "must-reads" and I always look forward to your thoughts. Keep it up!