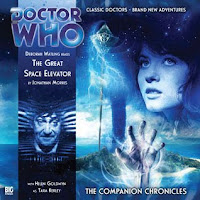 What’s it about: The Great Space Elevator is a marvel of human engineering; a transit tube stretching from the equator up to a space station held in geosynchronous orbit. When the TARDIS lands in Sumatra in the future, the Second Doctor, Jamie and Victoria are captured by guards just as the station loses power. Together with Security Officer Tara Kerley, the three travellers take a one-way trip on the elevator to fix the problem, and find themselves confronted by a powerful alien force that threatens to wreak chaos on Earth…

Victorian Orphan: Victoria is another companion that I haven’t really had much time for in the past. I will happily admit that Troughton, Hines and Watling had fantastic chemistry which glowed on screen but I have always found the character a bit redundant. She was either used to scream and remind us that the monsters were scary or blundered into trouble and advanced the plot. Unlike Polly who had some attitude and Zoe who had the brains, Victoria is just sort of…there. Jonathan Morris has written a story that suggests there was far more going on than we ever thought and her trip up in the elevator alone sees the young orphan describing the experience in poetic detail. Victoria looks back on her life with the Doctor and Jamie as though it was a dream, Alice caught in the Looking Glass. They were the most exciting days of her life, the most vivid and the most terrifying. Now she was a wife, a mother and soon to be a grandmother but she has never told her family who she really is and what time period she came from. She made up a whole other history for herself and her memories of reality are fading fast. During the adventure of the Great Glass Elevator she thinks they ladies of that time period wear scandalously short skirts! Victoria is not prepared to miss out on the adventure because she is a ‘mere girl.’ It’s during moments of wonder when Victoria misses her father the most, the things that he would have loved to have seen. She is bravely determined to put herself into danger to find some answers.

Oh My Giddy Aunt: Morris captures the elusive second Doctor perfectly with some lovely observations of his physical comedy (I loved the description of him tugging out wires like ‘a magician pulling flags out of a hat’ and when he gets forgetful he is all ‘fingers and thumbs’). He’s always wanted to see a Space Elevator and this is his first opportunity. I loved how he explained the concept of the elevator to Jamie with a conker and shoelace! All you need is imagination and a piece of paper and you can solve anything. When the Doctor smiles, for a second Victoria sees her father in him. Troughton always worked well with props and I love the idea of his tapping the base personnel on the forehead with a teaspoon! He feels responsible for Victoria but she thinks if he had his way she would never have any adventure at all! Watling gets Troughton’s gentle mothering perfectly and the moment she exclaims ‘Oh dear!’ is perfect. He pulls himself to his full height which admittedly isn’t very high! I bet the Doctor loved playing the brainwashed villain, winking at Victoria and walking stiffly like a zombie! He’s always got a trick up his sleeves…or in this case his trouser leg! The Doctor always likes to leave before he can be thanked for his assistance; is it because he doesn’t like to be thought of as a hero, because he didn’t like awkward goodbyes with people he barely knows or because he is eager to get on with the next adventure?

Who’s the Yahoos: Its often the case in the companion chronicles that when one of a duo of companions is narrating the others role is perfunctory and whilst Jamie is around for the whole story he is naturally not explored in the same amount of depth as Victoria. We do get one of his famous double entendres – ‘would you look at the size of that!’ – and we’re treated to his astonishing sexism, suggesting Victoria be left behind because she would only need rescuing! Jamie doesn’t see anything wrong in the monster wanting eat but then he always was thinking about his stomach!

Sparkling Dialogue: ‘I could see the whole island of Sumatra surrounded by a glistening ocean. Then the island itself grew smaller and smaller as we hurtled up through a thin, feathery layer of clouds. I could look down and see the scattering of islands that make up the East Indies spread out before us.’ Victoria describes the vertiginous, wondrous ariel view from the ascending elevator.
Fingers are described as fizzling like ‘frying sausages’!

Great Ideas: A vertical black line reaching into the sky with a frame of steel and glass that sparkled like cut glass in the sunlight. The other end reaches up to a sky station in geo-stationary orbit. I love the ambition and optimism of the sixties stories with terrific inventions like the Elevator, the Gravitron and the Ioniser, awesome constructs that prove human ingenuity and imagination. Victoria says they have been on Telos, just off the Greek Islands. Cities are described as lighting themselves one by one as they slipped into the Earth’s shadow. The sky station is a geometric structure covered in struts and solar panels, rotating serenely. The creature is attempting to create a cyclone, using the elevator to conduct the mother of all storms as a five-course banquet! The creature is from the space between worlds, an echo in the darkness, an infinite scream. The creature is absorbed into the Earth’s crust where it can do no harm.

Musical Cues: More quirky music to portray the Troughton era, just like in Helicon Prime. I loved the dangerous weirdness at the beginning of part two.

Result: An authentic season five story featuring floods of foam, one fantastic location, Victoria wondering into danger, arsing about in ventilator shafts and a disembodied entity! There is a lovely sense of innocence to this story that makes it charming rather than exciting but it is rather wonderful to enjoy a further run-around with the most childlike of regulars. Deborah Watling narrates the story very well, capturing both Victoria’s sense of wonder as she travels in the elevator and her fear as she is once again led into danger. The second Doctor shines in this quirky piece, miles more engaging than Helicon Prime: 7/10

Buy this from Big Finish here: http://www.bigfinish.com/32-Doctor-Who-The-Companion-Chronicles-The-Great-Space-Elevator
Posted by Doc Oho at 17:14

Just listened to this and really struggled with some of (most of) the science. I think I will be rating it much less highly than you!

You make good points about the character of Victoria

She's an odd one, Victoria. Oddly forgiven for her foilbles and fondly remembered and yet she barely did anything of note!

Just reheard this one. On the one hand, I loved the poetic and beautiful descriptions of travelling up the space elevator. It's always been a concept that fascinated me, but thus far, the only authors I've seen to deal with it are very hard sf writers with an incredibly dry writing style like ARthur C Clarke in The fountains of Paradise.
Victoria's description of the changing earth was lovely indeed as was her vivid account of the earth from space, I also totally agree with you on the troughton physical comedy and bouncing around in foam.

On the other hand, once we get up to the station, it did rather feel as if the plot was standing still, indeed never mind Jamy and the Doctor's rather adorable (if sexist), protective attitudes towards Victoria, Tara basically was just there to get possessed, and the possession and the creature were pretty quickly dealt with.
In a lot of ways, this feels more like an artistic impression of a scientific concept than an actual story, an older lady remembering sights from her youthful travels, indeed I do confess I feel a little sorry for Debra Watling in that her voice has clearly aged far more than some of her fellow actors, (my own voice teacher says it's more common in women), meaning that though her acting and her emotions are there, this feels far more like being told the story by an older Victoria, rather than, as with what happens with the other companions, beginning as their older self recounting the story but then being swept away with the adventure, here, I never lost the sense of this older character.
Whether this is to do with Ms Watling's voice, or whether this is just because Victoria (other than her rather lovely curiosity and thirst for exploring in tomb of the cybermen), was never a particularly strong character anyway I don't know.

I will admit Victoria has never got up my nose half as much as Susan, even though character wise they often had the same purpose. Maybe it's the fact that as a girl from very much the era where women were seen and not heard, (as opposed to an advanced civilization), or maybe it's just her rather lovely liking for exploration, something which was stated with Susan but never occurred completely I don't know.

Either way, whatever I think of Victoria, Watling's performance or anything else, I can't deny this has some lovely set peaces, albeit the narative felt rather flimsy over all.

I think the reason that people are more forgiving of Victoria's faults than they are of other companions is that her travels with the Doctor were involuntary. She didn't get in the TARDIS to have adventures, she got in it to avoid getting murdered by Daleks. Because she didn't choose to go adventuring, the fact that she messes up and breaks down while adventuring is more sympathetic.