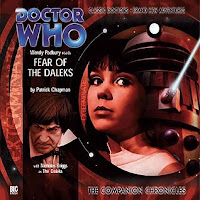 This story in a nutshell: Zoe is starting to remember travelling with a man called the Doctor and recalls the terrifying time the Daleks used her as an assassin…

Logical Gal: What a shame that this story should be told from Zoe’s point of view because the writer adopts a very cold and clinical narrative approach that makes it very hard to penetrate the story. Zoe is having lucid dreams, nightmares of monsters and travels in time and space. She is trying to piece together this mysterious past of hers by seeing a counsellor and studying her dreams. The Doctor enjoys having another genius in the TARDIS. She is used as an assassin to kill the Tabari President. Zoe is tortured as she tries to resist and warn the President and she admits she would rather die than kill anyone. There is not enough development of Zoe’s character or enough of a reason to have this has a flashback to make the effort worthwhile.

Oh My Giddy Aunt: ‘Oh my word! Zoe!’ – Padbury’s Troughton impression is spot in places; I found it more convincing than her recreation of Zoe! He has mop top hair, a funny well-worn face and a shabby dress sense. He is mysterious and wise, serious and frivolous and mature and silly. The Doctor genuinely believes he has seen the Daleks’ final end. He is practical in his humility, if he knew everything what would be left to discover? He wouldn’t know what it is like to meet a mind greater than his own! The Doctor doesn’t think he has the right to kill, not even the Daleks.

Scots Lad: Is Jamie in this story? Oh yes, Zoe describes him as having a kind blunt face, a brave man and who deep down makes you want to protect him. Padbury’s Scots accent is very stiff.

Great Ideas: An asteroid with a domed city and rockets arriving. There are peace talks happening because they are a neutral city. Antrekar wants to use the Daleks to take over the Zantha and the Tabari worlds and build the greatest Empire ever seen dividing the galaxy into those who are with us and those who are dead. Sleeper agents will be planted and used to create chaos and then the Daleks will sweep in during the madness and take over. At the story’s conclusion Antrekar forces the Daleks to feel a dagger of remorse so they can understand the horror they cause.

Standout Performance: Nick Briggs is very good as the Antrekar Dalek, he plays it with the sort of urgency the rest of the story needs.

Audio Landscape: There is a dramatic Dalek extermination opening but throughout this story lacks the elegant description of Frostfire so there is no chance to recreate the same sort of atmospherics. We can hear people going up and down in escalators, the hum of spaceships, extermination blasts…but on the whole this is pretty quiet, unmemorable production.

Musical Cues: Its rare for a musical score for a Big Finish production to be so out of sync with its story. Scenes are punctuated with the loudest, wince making stings and it really feels as though the musician is desperate to create the atmosphere the production lacks.

Isn’t that Odd: The sixties was a remarkably innovative period in Doctor Who but you wouldn’t think so listening to Fear of the Daleks. This is all space cities, mind probes and warring factions – every B movie cliché you can imagine! I really don’t buy that the Doctor, Jamie and Zoe are picked up within minutes and then take straight to the very man who is going to take over the galaxy and are told his entire plan! Is this the lamest Dalek opening we have ever seen? Not a dramatic invasion or a sudden reveal but the Doctor recognising their technology! The story is written in such a clinical, logical and dull way, Padbury deserves so much more! Even the Daleks sound a little embarrassed saying ‘Exterminate the Doctor!’ The dialogue doesn’t really improve amongst the banality of ‘insolence invites extermination.’ Antrekar is such a rubbish villain, stupidly buying into the promises of the Daleks and then turning good as soon as he sees what they are capable of (but he already knew what they were capable of because he tells the Doctor about their plan to subjugate or kill). ‘I must atone for my treachery!’ – who in all realms of plausibility would say something like that? The story ends on the most clichéd of notes, it doesn’t force the Doctor or Zoe to make a tough choice and murder the Daleks but Antrekar steps up in a moment of self sacrifice and redemption and spares them of the choice. How lame.

Result: Fear of the Daleks has a lot to answer for. I bought this story as an example of what the companion chronicles had to offer and was bored stupid and despite positive reviews of subsequent series I never bought another for years! Like the novels that were being written at the time for previous Doctors it seems that the second Doctor suffers the worst stories. The script is swamped with clichés and features extremely banal dialogue and as a result it feels like an embarrassing example of sixties naivety. Not one of the sixties stories has aged as badly as this post millennium written story, this is a horrible misstep for the first series of companion chronicles: 3/10

Buy it from Big Finish here: http://www.bigfinish.com/12-Doctor-Who-The-Companion-Chronicles-Fear-of-the-Daleks
Posted by Doc Oho at 15:24

My canned reaction to Fear is that the concept of having the main characters able to perceive two places at once really isn't suited to an audio drama.

I liked the framing story, though. Either the Doctor's been reading her diary, or he's posing as her counsellor.

I love Zoe, especially with where her Companion chronicles arc goes later, and to think this was her first story is just plane embarrassing!
I fully agree with the comments, however equally i will say there were a few things i liked, albeit not many.

At first, I actually thought the rather cold narrative style was a deliberate choice on Chapman's part, conveying the exacting perspective of the cold Zoe with her idetic memory and rational approach. Indeed, with the first scene linking in the old Bbc "Now we're going to rerun evil of the Daleks" ploy, I thought the point would be this was one of the instances Zoe was overwhelmed by emotion, her "fear of the daleks"

I also did really like the start with the space city and two headed blue alien, sinse this is just the sort of environment I love to imagine, sinse not the best cgi or costumes in the world conveying platform 1 or the Mos Aisley Cantina can approach the alien diversity of your own imagination. Indeed I almost feel Chapman's start belongs to a totally different story, particularly with the extremely biased description of the Zantha Tabari war, and the Doctor and co being dragged into custody for no eason.
Then we meet Antreca and it all goes down the tubes, though oddly I did find Zoe's interactions with the president rather interesting in the way they fleshed out the Tabari history and gave some hints to the Zantha, however then the Daleks appeared and everything stalled, really wy did the debate about whether the Doctor or Zoe was going to use the christal weapon on the Daleks go on so dam long? any self respecting Dalek should've exterminated them by then.

Oh, and the Daleks are overcome by remorce? please! they are Daleks!
Listening to this one again i actually do wonder if the script was rushed, or if Chapman had a much different idea (perhaps surrounding the Tabari Zantha conflict), that didn't pan out so he had to spin all the psychic projection nonsense over the hole story.

All in all though I agree, other than Knick Brig's Daleks this one really didn't do much and it's a shame such a fantastic character as Zoe started this badly, particularly with how interesting her potential story is, (glad Bf returned to this later).

"Padbury’s Troughton impression is spot in places; I found it more convincing than her recreation of Zoe!"

Yeah, it's true! Her imitation of the Second Doctor is probably my favorite thing about this otherwise mediocre tale.