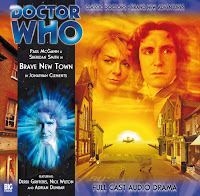 What’s it about: It's like The Village That Time Forgot! The inhabitants of the quiet seaside town of Thorington in Suffolk are living the same day over and over again. What's so special about the 1st of September 1991? Why haven't the villagers noticed that the same song has been number one for years? And just where on Earth has the sea disappeared to?

Breathless Romantic: The Doctor manages to save an entire new race from certain destruction and deservedly gives himself a pat on the back at the end of the story. He was planning on taking Lucie to the seaside but she was thinking Blackpool rather than the town that time forgot! The Doctor likes a good mystery but this has questions that keep piling on top and there are no answers and the only people who can give them are prevaricating like mad! No wonder he gets a bit grumpy. He thinks he might be slipping because he didn’t suspect for a moment that he might be dealing with Autons, the people of the town simply feel too real to be fake. Lucie thinks that the Doctor knows everything. I really liked the scene where he opened to the comms and sent a coded message to Lucie and McCarthy to detonate the bomb using explosive and cataclysmic and destructive language!

Luscious Lucie: One thing I really learnt about Lucie in this story is that whilst she might not be very intelligent, she does have a lot of common sense. ‘Where does all plastic come from?’ asks the Doctor ‘Taiwan?’ answers Lucie. ‘Marco Polo himself!’ the Doctor enthuses, ‘The guy who invented the mint?’ asks Lucie. I can imagine that Lucie spent a lot of her school life bunking off and learning about life because her knowledge is appalling whereas her ability to handle herself is second to none. She certainly has a vivid imagination and she walks from the TARDIS suggesting zombies, ghost towns and epidemics! When the Doctor says they are going to the shop Lucie exclaims ‘sherbet fountains!’ She was born on 31st July 1988. I loved her reaction to being hit with a tranquilliser (‘I’m not some walking dartboard you…’) – I don’t know where that sentence was going to end but I bet her captors are glad she fainted when she did! Declares that the papers are ‘all in foreign!’ and is appalled that the Doctor breaks up the pace at the end of the story to settle a domestic. Clearly in Lucie’s house they let off the explosions first and talked about their feelings later.

Sparkling Dialogue: ‘Its 2008’ ‘Thank God for that! Bryan Adams isn’t number one anymore!’
‘I don’t care if it’s the Women’s Institute coming over that hill, if they’re armed I’m going to blow them up!’ – McCarthy channelling the Brigadier there!
‘Talk about having something up your sleeve!’
‘Its funny but I don’t fancy destroying the human race anymore…’

Great Ideas: People are walking around acting normal in the village that time forgot buried under a layer of dust. The clocks have stopped. The cans are empty in the village store. People can be replaced. It is the same day every day. Everybody has a fallout shelter in their garden. Nobody gets hungry or thirsty. The newsagent picks up the paper he has already delivered so he can sell it to the same person the next day. Where is the next town? Where is the sea? Who builds a seaside town so far from the sea? Turns out we are not in England but Uzbekistan! It was a fake English village where spies could practice in a British setting. A spy school of Autons! They don’t eat, you can’t stop them with bullets and they don’t show up on thermal imaging scans. The school was shutdown and the synthetics were left behind and the Autons have kept up the pretence for 17 years. These are independent Autons, embracing their roles as humans. The Soviet scientists must have put them there after having found one of the Nestene meteorite storms that have fallen over the past few decades. They now want the oil for themselves, without the oil there will be no more Autons. To humans their lifeblood is nothing but fuel; they have to join forces to save the life force of their race – kudos to Jonathan Clements for exploring the Autons in such a fascinating and unusual way here. After the Doctor buries the Consciousness signal that has been driving them they return to normal as humans and are now asylum seekers, forgotten people, 17 years out of touch. McCarthy ponders over whether they could use this invincible race as a weapon…

Audio Landscape: I personally think that the Autons work very well on audio, whilst they were never the chattiest of monsters they had some pretty frightening sound effects that caused my hair to stand on end! Wind, shop doorbell, clicking a light switch, change rattling, the TARDIS ceiling scanner, growling armoured personnel carrier, musical child’s toy playing, heart monitor, bullets, the oil well on fire, the comforting voice of the mother consciousness, banging on the sickbay door, Auton guns whooshing, that chilling Auton hum, a rat, the heartbeat of a Nestene meteor and the almighty final explosion.

Musical Cues: Very well done, I really liked the music when we think Sally is being hunted but it turns out she is firing at the oil well and talk about ramping up the tension at the conclusion as the explosion is imminent.

Standout Scene: I probably shouldn’t say this but it was while Lucie was on the loo! Or rather when she was washing her hands! That’s the first time you hear those fabulous Auton gun noises and all fanboy senses started tingling at once!

Result: Just like his season one adventure Jonathan Clements has thought up a very interesting scenario and explores it with some depth in his limited running time. The opening scenes pile mystery on top of mystery, Android Invasion style but have a silent menace of their own. I really like how the story subverts its location and its monster with some clever twists and there is an interesting argument in there about the Autons merely being the slaves of their controller and they could be a force for good. All this plus a number of exciting set pieces, some quirky dialogue, and an interesting open ended conclusion. I have been asking for more substance in season two and Brave New Town has it in abundance: 8/10

Buy it from Big Finish here: http://www.bigfinish.com/23-Doctor-Who-Brave-New-Town
Posted by Doc Oho at 15:12