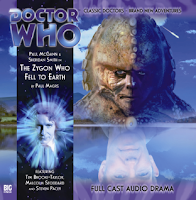 What’s it about:There are no monsters this time... are there? Ten years later and Aunty Pat is in her prime. She's snagged herself an ex rock star at the Kendal Folk Festival and now, in the brave new world of the early 1980s they manage together a snazzy hotel on the poetic and shingly shore of Lake Grasmere. However, still waters run deep and friends from the past are returning, intent on milking the old cash-cow...

Breathless Romantic: Whilst on the surface this is a quiet episode it will have consequences that will shatter the eighth Doctor’s life in the future. Such is the way of life when moments of decision that you think are right at the time turn out to have disastrous consequences for those who it effects. Admittedly he does ponder on whether telling Lucie that her Aunty Pat has died but ultimately decides that it will do her no harm to leave her with the comforting notion that the Pat she knows and loves is the real thing and not a Zygon replica. How wrong can he be? The Doctor and Wordsworth are like that. They are not here for a palaver with monsters but for the poetry, the scenery and Aunty Pat! Lucie declares him an old fogie when he asks what a remix is. He doesn’t destroy eco systems, enslave populations and suck out people’s minds (or at least not that we know of!). Like the third Doctor was with the Ice Warriors in The Curse of Peladon and proved wrong, thus the eighth Doctor is highly sceptical about the motives of Hagoth the Zygon and Aunty Pat thought he would be the last person to be prejudiced. After the Zygons are exposed and Lucie starts acting out of character I kept waiting for the Doctor to put two and two together and figure out she was a fake but turns out he was one step ahead of me all along and just playing along to gain her trust and learn more. Aunty Pat suggests there is death and disaster around him all of the time and notice how he doesn’t question that summation of his life. Like a romantic hero he wants to sit and drink tea as the sun comes up and quote poetry, a lovely image shattered by the shock reveal of Hagoth’s survival and their quiet pact of silence for Lucie’s sake.

Luscious Lucie: She didn’t realise that Aunty Pat ran a posh hotel way back when and puts her foot in it again suggesting that the Aunty she knew as she was growing up wasn’t successful or happy at all, hinting at the tragic events that unfold here. Watching Mims suckling the Skarasen is quite the most disgusting thing Lucie has ever seen! When she returns from her undercover spying a different Lucie she downs half a pint of vodka! ‘Doesn’t this body appeal to your twisted tastes?’ she asks of Hagoth in which I was unsure if there was an insult or a compliment hidden! The Doctor rouses her from her slumber by insisting that this isn’t one of her Sunday morning lie ins and as she wakes and discovers herself encased in Zygon technology she screams ‘I’m in a womb!’ Lucie panics at the thought of Aunty Pat dying on the ship and Sheridan Smith’s vulnerable performance really pulls at the heartstrings. The idea that history could blink and miss Aunty Pat devastates her. When she finds out the truth of what happened however, that’s when the shit will really hit the fan…

Standout Performance: I really love how everybody throws themselves into their Zygon roles, especially in such an unusual script. Its one of those stories where had the actors not taken the material seriously it could have descended into farce but this dedicated ensemble wring every iota of feeling from Magrs’ layered script. I especially liked the relationship between Malcolm Stoddard’s Urtak and Tim Brooke-Taylor’s Mims, which could have been desperately embarrassing but actually turns out to be very funny and touching. I have to mention Steven Pacey who I had the biggest crush on during his time on Blake’s 7.

Sparkling Dialogue: ‘Let us take a stroll together in the moonlight’ ‘Oooh!’
‘He’s my great big hunk of Zygon!’
‘At the sight of our natural forms most of your kind becomes shrieking basket cases!’
‘Fingers crossed the Skarasen is off visiting his Scottish pal.’
‘She was given it by Warlord Hagoth or as you know him…Trevor!’

Great Ideas: Bygones Guest House in the Lake District is run by Aunty Pat and her husband Trevor. There are myths of a monster in the lake and as is always the case with these legends there is a Skarasen nearby! ‘Squeeze out her gorgeous vitality!’ cries Urtak as Mims milks the beast! Pat knows her husband is a Zygon and states that she has certainly dated far worse and they have a body print device in the cellar. The Doctor mentions another lot in the 19th Century down South, which seems to imply The Bodysnatchers and very interestingly links the Big Finish stories with those of the novels (stick that in yer pipe and smoke it, Gary Russell). Trevor had a terrible accident and his body was put into cryogenic suspension and only survives now through Hagoth, he’s assumed his form and kept him alive for a quarter of a century. The Zygons have been investing massively in industrial projects all over the globe for decades, encouraging the unleashing of modified CFCs into the atmosphere with the twin objectives of raising the cash for materials to repair their ship and causing massive damage to the ozone layer. Flinging every kind of poison at the sky and because it is in the guise of ‘big business’ the people of the Earth just let it happen – the spirit of free enterprise. I found these scenes highly appropriate as just like Brave new Town told an intimate story about the Autons whilst making some extremely salient points about humanity, as does this story about the Zygons. It makes perfect sense for the Zygons to tackle their desire to manipulate the environment of the Earth by polluting it since it is one method we would happily allow happening without a fuss as long as money is being made. The Zygons are ready to detonate gasses into the atmosphere as soon as they have the organic crystalliser. As that is fused to Pat’s skin they rip her throat out to get at it. When he sees what they have done to his beloved Trevor sends the Skarasen to attack their ship and release the gases, poisoning them all. He uses all of his energy to take one more shape which will last for a couple of decades, that of his love Aunty Pat thus keeping the web of time and Lucie’s memories of her Aunty on track.

Audio Landscape: We are extremely lucky that Barnaby Edwards directs so many of these EDAs because he has such a great ear for an evocative audio and he assembles some of the most impressive casts. There is a wonderful soulful opening that merges into a car journey with the song on the radio, pouring drinks, Zygon voices, the control signal, the Skarasen roaring and bursting free of the lakes, the transformation noise, morning birdsong, the sting of the Zygons, that whacky communicator alarm, the humming Zygon ship, the awesome Zygon alarm, Trevor being stung (whipped) near to death…

Musical Cues: Its great that both of Magrs’ EDAs have a song specially written and performed in them and this is another winner. The closing melody in particular is very stirring. I also loved the music whilst Lucie was creeping about after Zygons and the subtle piano theme as Lucie contemplates life without her Aunty Pat.

Result: The ultimate collision between the unreal and the domestic, The Zygon Who Fell to Earth enjoys the gorgeous premise of a fallen Zygon warlord opening up a B’n’B in the Lake District and falling in love. Now if that sounds like a lunatic premise too far be warned, this isn’t a ribbing at Doctor Who but rather a characterful and touching adventure that tiptoes confidently between embarrassment and genius. The Zygons are very well suited to audio as there are so many memorable and creepy sound effects to call upon that make them instantly recognisable and enjoyable. Paul Magrs never really lets me down, this was the one story of his that approached with caution and within I found some wonderful moments of warmth and laughter and an ending that left me holding back the tears. Bravo: 8/10

Buy it from Big Finish here: http://www.bigfinish.com/26-Doctor-Who-The-Zygon-Who-Fell-to-Earth
Posted by Doc Oho at 17:25

I really enjoying your reviews on this blog. Here are my thoughgts on the Big Finish episodes on radio in 2008.