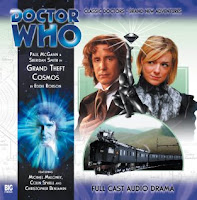 What’s it about: Here's to crime, Doctor! The Doctor and Lucie visit nineteenth-century Sweden and become embroiled in an attempt to steal the infamous Black Diamond. But the stone is guarded by forces not of this world...

Breathless Romantic: Oh my, what luminous characterisation of the eighth Doctor! It reminds me very strongly of the same irreverence with which the sixth Doctor tackled Dr Who and the Pirates, a sense of casual abandon and a dazzling sense that he is making it all up as he goes along with great pleasure! When he announces that they are going to steal the painting he is positively foaming at the mouth with excitement! This episode suggests a trainspotter Doctor with a geeky notepad licking his pencil. It transpires that the works of Tardelli are obscure because the Doctor has done his utmost to find them wherever he can and destroy them! He tells us of an adventure in Rome where he discovered that Tardelli could warp the fabric of reality and he was trying to influence the Pope. When criticised for his time crafts lack of stealth making discreet landings impossible the Doctor bemoans that it is exceedingly difficult to making the rendering of space and time any quieter. The Doctor is clearly having a ball playing Lucie’s gruff guardian, I bet he loves these kind of theatrics. He thinks it is quite possible to be a morally sound thief and cites Robin Hood, Lucie ponders that he was at his wedding to which the Doctor replies ‘No, he wasn’t the Marion kind.’ Groan. He indulges in a spot of swordplay and I bet he looked strikingly Byronesque with his flowing hair and velvet jacket! With a certain crushing inevitability he always shows up. Are they talented amateurs? Thinks he is clever by forcing Tardelli to free his people and mentions that you should never meet your heroes. I love that as she zaps off the Headhunter still refuses to acknowledge the Doctor as an enemy and asks for his and Lucie’s CV, just in case any work comes up that they might be suitable for!

Luscious Lucie: Oh Lucie let me count the ways I love thee! If I were to rank the original Big Finish companions from worst to best I would have to start with C’rizz who hardly ever floated my boat, then move onto Erimem who was very good but had stories of unpredictable quality and was chopped off in her prime, next up would be Hex who is quietly rather wonderful and real but is sometimes drowned out by the melodramatics of his other regulars, Charley comes next who is extremely inconsistent as a character but at her best (her first two season and her run with the sixth Doctor) is one of the best companions and Evelyn would come out on top as one of my all time favourite companions, beautifully performed by Maggie Stables and having a consistently wonderful rapport with Colin Baker’s sixth Doctor. Lucie Miller is edged into second place by Evelyn but just by a smidgeon, she’s excellently suited to McGann’s northern eighth Doctor, she makes me laugh in every single story, she has a fabulous line in put downs and she is so successful you invest a lot of energy and emotion into her (making the huge developments in season four all the more devastating). I really like her as a companion because she doesn’t need much hand holding and I really like her as a person because she comes armed with a lot of common sense and humour. Alas I have just that bit more emotional energy invested in Evelyn, when she gets upset it well and truly breaks my heart and I simply adore the idea of a feisty old dear getting a new lease of life in her twilight years.

Anyway I digress from the fabulous work done with Lucie in Grand Theft Cosmos that sees her relationship with the Doctor at its height. Astonishing considering Sheridan Smith wasn’t even there on the same day of recording as Paul McGann but thanks to some smart editing and phenomenal performances you have no chance in hell of telling that this was the case. As one of my very favourite actresses Patricia Routledge said comedy is all about rhythm, all the best comics throw a lot at you very quickly but if it flows and the wit is in the right places it hits a crescendo of humour that really tickles your toes. Grand Theft Cosmos displays that sort of wit in profusion, lots of clever wordplay and fast paced chemistry between the actors that left me heaving with laughter. It’s at times like this it is very handy to have performers of the calibre of Smith and McGann. Lucie wants to play her MP3 Player regardless of the consequences to the web of time! She cannot believe that she fell for the ‘look over there!’ trick. Lucie is just as enamoured with the idea of being an art thief as the Doctor. Her turn as the camp and outrageous poash Miss palmer Tomkinson had me in stitches, she plays the dainty, fainting, fawning, flirtatious, fluttery rich girl with considerable aplomb! ‘Oh pershaw!’ she scoffs to her guardian the Doctor and manages to extract all the information they need from the guard with her damsel in distress routine. How far have companions come, there was a time (Susan, Victoria) when this sort of Dresden china really did hang about with the Doctor! As much as the Doctor dresses it up as something more Lucie still thinks of it as nicking something! When she finally sees a painting by Tardelli she is distinctly unimpressed. I love her whacked out reactions to things – ‘ang on!’ and ‘Leg it!’ She thinks the Headhunter is all mouth to which her nemesis responds that the Doctor has let his dog out! Oo-er! Expect pain…

Standout Performance: What an astonishing cast. I have been a little underwhelmed by the casts of the second season of eighth Doctor adventures – not because any of the performances have been bad by any means but because the calibre of the first season stories was so high (Bernard Cribbins, Nigel Havers, Roy Marsden). However this is as showy a cast as Barnaby Edwards has ever assembled with Paul McGann and Sheridan Smith at their height, Katerina Olsson and Louise Fullerton making a sparkling comeback and Timothy Spaull and Christopher Benjamin providing some very colourful characters.

Sparkling Dialogue: ‘Here’s to crime!’
‘Why don’t you use that stuff you put on a hankie and hold over someone’s mouth?’ ‘Because a good whack on the head is easier, more reliable and above all cheaper!’
‘I obey…’ ‘Why do people always say that when they’re hypnotised?’ ‘It’s the default setting on most mind probes. You can choose what response the subject gives you.’
‘What’s that?’ (whispering) ‘I don’t know…’ – you’ve got to love a thoughtful hypnotised lackey!
‘Good grief you throw like a girl!’
‘You are entering a world (punch!) of (punch!) pain (punch!)!’

Great Ideas: I love the idea of Lucie and Karen bumping into each other so casually in the most unlikely of settings no they both travel with a time traveller! Claudio Tardelli has very few surviving examples of his work. Karen leaps from the speeding train onto a horse being ridden at speed by the Headhunter, having stolen a fake diamond! I love how the Headhunter beautifully puts down Karen but doesn’t offer any apologies. Isn’t all the Master-esque ‘wasn’t she dead?’ stuff great? They manage to skip over all the awkward explanations with pure cheek. King Oscar is a highly respected arbitrator and if he is influenced by Tardelli it could be ruinous for politics. The Headhunter is posing as Elizabeth of Bohemia and has hypnotised a guard to help them in their art heist. Lucie allows Simonsson into the TARDIS to suggest it is some kind of rare art treasure so they take it into the palace with the Doctor insider (and she makes a tidy profit in the meantime). I love all the scenes of tossing the diamond about and Karen and Lucie running into the scene and gaining possession at different times. A moving Tardelli statue – silicon based life form? Exiled to Earth, hidden in the black diamond containing a small self containing universe three light years long that Tardelli designed and rules over. The Headhunter is after Tardelli as a designer for one of her clients. The diamond is fractured and the universe is spilling out with a potentially ruinous collision of matter that will destroy them all. The Doctor forces Tardelli to force his gap in the universe into a gap between universes and allowing his subjects to survive.

Standout Scene: Its another one of those stories where it is hard to pick an individual scene amongst so many attractive moments but my favourite are probably the deliriously enjoyable Miss Palmer-Tomkinson scenes.

Result: Stylishly written and directed, Grand Theft Cosmos matches Max Warp as the most brilliantly irreverent and pleasurable release of the year. I love heist stories when they are done well and Eddie Robson gets the gleeful tone of this story perfect and his witty and clever script is matched by a very impressive, elegant cast. The pace is relentless and the comedy flows beautifully from the characters and their history but there are also some very tasty original ideas floating about as well. Enjoy these times with the wonderfully fun eighth Doctor and Lucie team because it wont last forever and their partnership sees Big Finish produce another unforgettable, unmissable series of adventures. The Headhunter whisks away in a romantic fashion and I desperately want her to return! A comic heist tale that always leaves me blissfully happy: 9/10

Buy it from Big Finish here: http://www.bigfinish.com/25-Doctor-Who-Grand-Theft-Cosmos
Posted by Doc Oho at 23:26