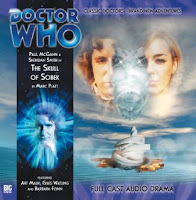 What’s it about: Too much perfection's dangerous. On the isolated planet of Indigo 3, far out in the wastes of the Blue Desert, lies the Sanctuary of Imperfect Symmetry. It is a place of contemplation and reflection. It is also a place of death. Something from another time, from another world, has found its way inside the hallowed walls. Something with a leathery hide, a long snout and sharp pointy teeth. Tick tock. Here comes the crocodile...

Breathless Romantic: It’s the first time that I have said it for this range (and it really surprises me coming from the usually reliable pen of Marc Platt) but this was a pretty unmemorable showing for the eighth Doctor. I don’t expect wit and wonder every week but I do think we should learn a little something about the character in each story (why include him otherwise?) but this story was so plot driven the Doctor’s character was pretty much swallowed up in the mechanics of the narrative. Paul McGann was so alive during Max Warp it seems such a shame to deprive him of the sort of material that brings out the best in him. I did like his admission ‘that’s my brave Lucie’ and the acknowledgement that he has always fought for freedom but neither statement is particularly mind-blowing. Probably the best thing to come out of this story for me is that he is under Lucie’s guidance from now and is only released from the planet under her care. I wonder if it will be brought up again because that is a very fun idea!

Luscious Lucie: Just as Dead London catered for the Doctor and left Lucie flopping by the river like a desperate fish, The Skull of Sobek gives Lucie a meaty role and neglects our hero. Sheridan Smith throws herself into the role of the possessed Lucie with real gusto and puts on a terrific, snarling voice for the part (‘There you are you cringing dog!’) – I bet the outtakes were brilliant! Lucie has great fun with the Doctor as she leaves the TARDIS and mocks at the general blueness of the planet (its all in the performances – I can imagine, say, the fifth Doctor and Tegan playing out the same scene and the emphasis being entirely different with everyone’s favourite Australian whinging interminably but Smith attacks the sarcastic material with a wink and a smile and makes it amusing). She is worried that she is getting used to the sight of dead bodies on her travels and that disturbs her, she doesn’t want that to happen. Lucie is developing appalling habits, the monk is dead and she goes ahead and robs his ass! A lot more sensitive than she lets on. Crocodiles are the one thing that really wind her up…whenever she got worried when she was younger she had anxiety dreams of their horrid smiley faces, sticky outy teeth and slitted eyes. When she is shown Sobek of the past she is seduced by the wild, save and darkness of the planet. The Doctor tries to bring her back from possession by reminding her of fish and chips, the Blackpool Tower and the log flume on a Saturday (sounds enchanting). I love her subtlety as she tries to leave the nunnery: ‘I don’t want to stay her with you blue baldies!’

Great Ideas: Every 83 years a torrential storm floods the blue desert and a few days later the whole region is carpeted with aquamarine flowers (now that’s the Marc Platt I know and love!). There are planets out there that approach perfection but its all the annoying imbalances that make life interesting. Sobek was once an imperial world ruled by notoriously contagious Crocodilians! The flames in the sky are prophecies of war and apocalypse. Sobek was a world founded on centuries of slavery until the oppressed overthrew the their tyrannical monarchy. A few royals escaped the blood purge and now they are being hunted down. The skull is the repository of all of Sobek’s history and memory, it has chosen a champion and their stolen world will be avenged! The ancient battle is about to be re-enacted with the Doctor and Lucie as the opponents, two old relics who can’t even remember why they are fighting.

Audio Landscape: Bell, horn, lush jungle life, clashing steel, growling voices, wind, grumbling thunder, a body floating in the healing pool, something thrashing in the water, the Doctor shoved from the window, a hand being bitten off and eaten (!!!), coins and treasure, lightning bolts, spaceships landing, screaming, being eaten (ugh!).

Musical Cues: Not bad at all, relaxing strings in the introductory scene merging into battle drums.

Result: Not one of Marc Platt’s better efforts on audio, The Skull of Sobek is a confused and humourless tale that sits uncomfortably within its single episode format. There isn’t the space to tell an engaging story and explore this world in any great depth and both are neglected and as soon as we hear that the ages old battle is going to be re-enacted it is painfully predictable that the Doctor and Lucie will play opposing roles. Barnaby Edwards gives his usual sterling effort and the sound effects are very striking (the horn and Crocodilian voices are especially dramatic) and Lucie is as wonderful as ever but ultimately I found it hard to engage with the material and kept expecting something more…thoughtful from this particular writer: 5/10

Buy it from Big Finish here: http://www.bigfinish.com/24-Doctor-Who-The-Skull-of-Sobek
Posted by Doc Oho at 19:04

I have a bit of a soft spot for the skull of Sobek there some really nice imagery cunjured up by writing and it was one of the first Big Finish plays I had listened to back when it was BBC 7.