Scaredy Cat written by Will Schindler and directed by Nigel Fairs 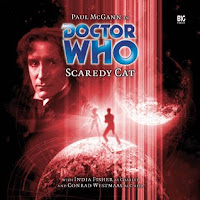 What’s it about: "Yaranaa - it means literally, 'the soul of the vengeful' - those whose lives have been cut short early and died with empty hearts" Millennia ago, the people of the planet Caludaar pledged never to set foot on their sister planet Endarra. But what secrets does the planet hold? There are laws even the Doctor won't break. And while C'rizz learns that some tragedies can't be averted, Charley must decide who the enemy actually is. For death walks on Endarra, and this time she won't be denied.

Breathless Romantic: Just one leap back into his own universe and the eighth Doctor (after a dazzling showing in Terror Firma) now sounds more bored than ever (but then with an adventure this unengaging who can blame him). Unfortunately there are a handful of stories where Paul McGann cannot bring himself to bring any enthusiasm to the role (Creed of the Kromon was another…can you spot the others?) but he isn’t given any exciting dialogue or surprising moments – in fact at the conclusion he sounds so uninterested about allowing an entire civilisation to be wiped out. His relationship with C’rizz lacks any sparkle whatsoever and when they are shoved together it almost sounds as though both McGann and the Doctor resents having him around! The sooner this lot disband and Lucie comes on the scene the better! As proud as the Doctor is of the TARDIS garden you cannot beat the real thing. He has given evil some thought in his time and cites the Daleks and the Cybermen as the worst examples. These days the Doctor has a more organic view of the timelines. He wants to teach C’rizz to ski and it’s a crying shame we couldn’t listen to that instead because it would probably be more interesting.

Edwardian Adventuress: No I’m sorry but I can’t remember Charley being in this. Was she the one who was shoved in cold storage with a serial killer?

Chameleonic Rogue: Listening to The Maltese Penguin before Scaredy Cat was a huge mistake because it reminded me of how wonderful Frobisher was (so much so I actually pulled out the Voyager graphic novel last night and started reading some of his fantastic adventures) but it also highlights how flavourless C’rizz is in comparison. I don’t understand how the Utermizen can get so worked up about the Doctor dismissing the fate of a community that is to succumb to a biological weapon when he admitted in at the end of the last story that he has murdered (sorry saved) a whole handful of people in the past (and doesn’t plan to stop!). Do the writers swap notes between stories or does this confirm my fear that there wasn’t a script editor at this point. I bet Conrad Westmaas is a right laugh but playing this insipid, unstimulating character you would never be able to tell.

Sparkling Dialogue: ‘Blue tits!’ ‘Is that a Gallifreyan term of abuse?’

Great Ideas: The TARDIS gardens are the Doctor’s pride and joy and yet he once let an entire incarnation slip by without trimming the bougainvilleas. Two planets that almost destroyed themselves in war and vowed to protect the sanctity of their sister planets. ‘Principles should be seen and not heard.’ Have you ever considered the nature of evil, it springs from a nexus point, a moment of decision, split second where the balance between good and evil is tipped the wrong way. Have they been playing God on an unknown world? If you are going to open Pandora’s Box you have to be prepared to take the consequences (yes it does get that dull). Morphic resonance is the theory of collective memory throughout nature; the memories are held in a morphagenic field and is passed on to each new generation of life. The Doctor pops back to Endara 4 million years ago where they are being wiped out by a passing battle fleet that used them as a testing ground for a biological weapon. The planet was raped and it never forgot and it actualised itself in the form of Galena. Flood abducted and murdered ten people and for no reason I can determine now has an affinity with the planet and can bend nature to his will and the most he does is force primitives to kill each other.

Music: I don’t remember there being any music and I certainly didn’t write any notes on it – which has never happened before in 75 main range releases.

Isn’t that Odd: How does a 75-minute story split into 101 tracks? Some of them are only 11 seconds long! Oddly the story doesn’t bother setting up its characters it simply jumps straight into the plot without getting us close to anybody. Why did they choose Linda Bartram to play the little girl…she must be 30 – why not simply get a little girl to play the part? The first cliffhanger doesn’t spring from the story; it is a shoehorned moment of danger that isn’t needed. It feels as though this was originally a much longer script that was castrated because it was so mind numbingly dull they wanted to get it over with as soon as possible. The second cliffhanger is equally as baffling, some chap says ‘Well hello my dear’ to Charley despite the fact that we don’t who he is or even if poses a threat. ‘Because I’m a political activist!’ admits Flood as if that’s all we need to know about his character. The big twist of the story is that Flood genuinely is a psychotic mass murderer, which we have been told over and again already (only Charley has been duped and its hardly the first time). ‘I’ll make them sing with pain before I finish!’ – why go for the revenge motive, it’s the only thing that could make this yawn fest even more tedious. C’rizz the killer pops out at the end of the story after judging the Doctor as heartless! Who is Flood? What does he stand for? Why did he kill people? Why does he want revenge on the sister planet? The conclusion as Flood is beaten down by a hail of ‘Scaredy Cat’ chants is rubbish – what the hell was the point of that saying anyway? All Floods’ evil is washed away and he is left like a newborn baby, this story is so moronic it borrows an idea from the similarly dull season 18 opener.

Result: This is the first time a story has been so monotonous I was left completely apathetic by the experience and found it a chore to write the review. At 75 minutes long this should be a snazzy, fast paced science fiction thriller but instead all we get is an anonymous bunch of characters (we literally know nothing about them) rehashing the plot of The Twilight Kingdom (except with even more stagnant dialogue). It’s further proof that with a script that is lacking, Charley and C’rizz (and their performers) lack the ability to bring some life to the story (in the way Evelyn or Lucie would). Paul McGann sounds like he has been hypnotised and delivers his dialogue in such a banausic fashion there is no doubt he is as bored as we are. Scaredy Cat leaves no impression on me whatsoever except I wasted a sunny morning inside listening to it. It worries me that Big Finish’s lows are so bad at this point and so frequent: 2/10

Buy this from Big Finish here: http://www.bigfinish.com/75-Doctor-Who-Scaredy-Cat
Posted by Doc Oho at 06:59

The story isn't very good, but Paul Mcgann's performance is awful! I'm sure that if this was a Sixie story, Colin would have done a much better job. The Doctor sounds just like he has been just awaken after a bad hangover night! Bored,dull...
I love the Eighth Doctor when he's the breathless romantic, or enthusiast, or angry but... this is painful

True, this audio was rubbish, but I don't see a contradiction between C'rizz of last episode and of this episode... Last episode he made it clear that Utermizens (if not everyone in the divergent universe) has a radically different view of death than we do. They remember their dead, while the poor blighters on Endarra will be remembered by noone. Also, time itself (and thus traveling through it) is still a rather novel concept. Of course he isn't going to understand why they can't help those people.