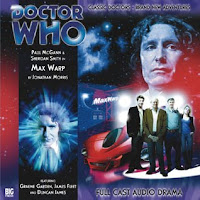 What’s it about: Welcome to Max Warp! Broadcasting live from the Sirius Inter-G Cruiser Show. Hosted by outspoken columnist and media personality Geoffrey Vantage, with spaceship-guru-extraordinaire O’Reilley and daredevil pilot Timbo ‘the Ferret’. When a test flight of the new Kith Sunstorm ends in disaster, the Sirius Exhibition Station is plunged into a web of murder and intrigue. Someone – or something – is trying to re-ignite a war between the Varlon Empire and the Kith Oligarchy. As the fate of the galaxy hangs in the balance, only two investigators, the Doctor and Lucie, can hope to uncover the truth. So strap yourself in, engage thrust, and prepare for... Max Warp!

Breathless Romantic: This is the story that outs the Doctor at last…as the total spaceship geek we always suspected he might be! I can just imagine him as a young boy on Gallifrey making models of all the coolest spaceships with the Master and playing war! The Doctor is one rubbish date according to Lucie, he thinks he had his mid life crisis a few centuries back but she’s not so sure! He has an inferiority complex about the TARDIS (its hardly very bling) and so naturally Lucie teases him about it as much as she can. Every time his erstwhile assistant makes a faux pas he gives her a not so subtle whack. I loved his nonchalant reaction to discovering that they are in a simulator and a genuine spaceship that is about to crash (‘Didn’t you guess?’). He finds the Kith fascinating what with all their budding and bubbling. He is completely anal about technical detail (he reminded me of a Doctor Who fan obsessing about a point of continuity!) and changes things out of principle. One thing he has learnt is the best way to win a war is not to start one. The old ham wants to gather all the suspects together for his very own Poirot moment. ‘People might actually like the show if its actually about spaceships’ he says at the end once O’Reilly has taken over Max Warp – geek! His double bluff, saving the Ambassador by faking his death proves that he definitely hasn’t lost his touch.

Luscious Lucie: Jonny Morris should write every Lucie script because he gets her voice spot on and remembers the best way to charm people is through their sense of humour. Lucie is hilarious in Max Warp, tiptoeing from one crazy scene to the next as she and the Doctor try and solve the murder mystery. She does like spaceships but not so much that she wants to stick a poster of one on her bedroom wall. Lucie compiles an intelligently thought out list of suspects…everybody they have met (‘Its Kilbride! It’s the President! It’s the Spin Droid!’). Her rubbishy cruiser-destroying ferret theory made me howl with laughter (screaming out ‘Otter! Beaver! Mole!’ as they fly to their deaths!). Geoffrey Vantage thinks it doesn’t sound right with Miss Lucie Vauxhall Nova (hah!) as one of Max Warp’s commentators. She’s at the mercy of her hormones, she’s dangerous to herself, she’ll want to talk about her emotional problems and before you know it the whole show will be about shoes! Somehow Lucie manages to keep her cool around all this blatant sexism. She is of the non-male persuasion! Poor Lucie has to awkward escape O’Reilly’s horrific flirting and she decides the best way is to be brutally honest (she’s just one step away from saying fuck off). She prefers the TARDIS to any of these modern spaceships…after all it is a shed!

Standout Performance: As an example of how magical McGann and Smith are together, Max Warp sees them at their height but this is an episode of terrific performances. Graeme Garden (in his first role in the eighth Doctor adventures – unless you are trying to tell me that Geoffrey Vantage is…The Meddling Monk!) is simply divine as the Jeremy Clarkson wannabe, sexist, rude, racist and outrageously villainous!

Sparkling Dialogue: ‘I bet they’re all male, single and having a mid life crisis!’
‘I could tell you but I’d have to erase your memory. In fact…I may have already told you…’
‘It’s a mans spaceship! Literally fuelled with testosterone! Ladies bring a toothbrush and a spare pair of knickers!’
‘Just smile and stick out your bits!’
‘The last word in looking like a total Morok!’
‘Do you have any idea how tedious it is to talk about spaceships all the time?’
‘He faked his own death as well? This is worse than Poirot!’

Great Ideas: The Intergee Cruiser Show at the Cirrius Exhibition is being hosted by…Top Gear – oops I mean Max Warp! The Funky Board was a gorgeous touch. The Ferret = The Stig! I was wetting myself at the subtlety of this parody! The Kith Sun Storm is incapable of malfunction but with the death of the Ferret somebody must have sabotaged it. The Cruiser Show is to show that both the Kith and the Varlon can set aside their warlike differences and work in peace but somebody is trying to reopen old wounds. The Doctor and Lucie wake up in a shuttle that is malfunctioning and screaming in panic at their impending death…realise it is only a flight simulator! For all their talk of reconciliation the Kith maintain a thousand strong battle fleet and the Varlon have nothing in comparison. According the Vantage men do not have the accident chromosome (hmm, my husband has written off three cars!). Jeffrey has had death threats from feminists (Janet Fielding probably), environmental campaignists, animal welfare… The Presidents Spindroid is found smashed to pieces and somebody attempts to assassinate the Kith Ambassador. The Kith battle fleet enter the exclusion zone and his shuttle is destroyed! The Kith give the Varlon five minutes to make any legal and religious arrangements before annihilation. The Kith are infected with a computer virus that infects the flight computer and dives them into the nearest moon at one false move. It was a trap to lure the Kith battle fleet her all along and destroy it. The virus was tested on Timbo the Ferret who was an undercover Kith agent! Timbo and the Ambassador both faked their own deaths! Timbo was the Spindroid in a fake robot suit! Jeffrey was trying to stop another war by wiping out the Kith, his racism has consumed him.

Musical Cues: A meaty, manly theme tune for Max Warp! The score is foot tappingly good as the Doctor and Lucie accelerate to their deaths in the shuttle. Great music in the bar, loud and nonsensical!

Result: A non-murder murder mystery, Max Warp takes its Top Gear in Space premise and wanks off some crazy fun with it! It’s a hilariously unsubtle parody, a fun mystery tale, a great chance to see the Doctor and Lucie at their sparkling best and a story packed with wonderful characters and very funny gags. There isn’t one part of this that isn’t firing on all cylinders. Barnaby Edwards provides some very memorable set pieces and the cast have an absolute ball. There is so much packed into this 50 minute episode but it all slots together with dazzling exuberance: 9/10

Buy it from Big Finish here: http://www.bigfinish.com/22-Doctor-Who-Max-Warp
Posted by Doc Oho at 03:32

Have to agree this is great fun. Doesn't the Kith ambassador sound like Justin Lee Collins? I was convinced it was him.
Just one thing - The Ferret isn't the Stig in this. There is no Stig.
Richard Hammond is known as 'the hamster', so 'the ferret' is more likely to be a reference to that.

I understand this story was kind of a parody/satire of Top Gear, but since I don't watch 'Top Gear' this story just didn't do it for me. In my opinion it just wasn't funny. I mean, The Jeremy Clarkson analogue was a sexist, chauvinistic bully, and the 'Shut up O'Reilly' thing just got really old really old, the fact that Lucie even got in on it made it worse. And the nerve of that girl to deride the TARDIS by calling a shed... sorry, major turn off for me.

I prefer satire to out-and-out parody, but as parodies go, this one's at least well done and consistently amusing.