Other Lives written by Gary Hopkins and directed by Gary Russell 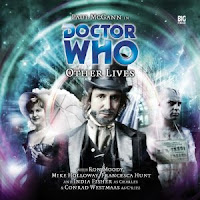 What’s it about: London, 1851. Scene of the Great Exhibition of the Works of Industry of All Nations. Scene also of a plot to un-seat the government, de-throne the monarch and start a republic. If the Duke of Wellington himself is to be believed... While the Doctor and Charley are drawn into the murky world of nineteenth-century politics, C'rizz struggles to maintain his dignity against growing odds. What begins as an attempt to prevent murder quickly becomes a desperate race to avert revolution. Separated from the TARDIS, the travellers are left to wonder if they'll get their own lives back or be forever entangled with the lives of others. And who is Mrs Georgina Marlow? What need does she feel the Doctor can satisfy?

Breathless Romantic: What a revelation. After his understated (and by that I mean bored) performance in Scaredy Cat (and who can blame him with a script as weak as milky tea) Paul McGann returns to form in a highly unusual tale for the eighth Doctor. My one complaint would be that the story takes too long to reach the point where the Doctor returns to Georgina and for all intents and purposes fulfils the role of her husband. The thing is I can completely imagine Paul McGann in the role of an Austen-style Mr Darcy romantic hero and here he gets to play that role for a couple for episodes whilst still being ostensibly the Doctor. As soon as he revealed that C’rizz would have stay in the TARDIS my first thought was I bet he did that deliberately. Hell hath no fury like a Doctor scorned and he tells Georgina that she is a bad mother and that she should take better care of her son to her consternation. He plays the showman very well and does sleight of hand tricks to pay for his entrance fee. The Doctor is falsely arrested, sentenced and banged up but then what’s new? I certainly raised an eyebrow when Georgina rescued him, suggesting that he was her husband (oddly my first impression was that he must have a very mucky future ahead where he comes back to this period and settles down!). In her mind they were married some 15 years ago in Camden chapel and they have a house in Camden where they have lived for most of that time. The Doctor flirts with her almost despite himself (‘Stop it…’ he says coyly as she compliments him). He never really thought of himself as a family man but doesn’t find it an altogether unpleasant feeling. Georgina is the only person in this time who has shown him kindness so when he loses the TARDIS and his friends he goes to her for solace. Georgina can see from his eyes that he is a good, kind man. The Doctor feels as though he has taken advantage of her and assumed the mantle of the Victorian gentleman. When he realises he will have to convince Edward’s Uncle that he is his nephew for the sake of Georgina and the kids the Doctor gets really nervous and fidgety but for the sake of the woman he has grown to enjoy spending time with he goes along with the charade and manages to convince. When his travels bring him in this direction he promises to look in on Georgina and after setting up home with her you honestly believe that he will.

Edwardian Adventuress: See now I don’t understand. Charley didn’t even register on the radar in Scaredy Cat. If you asked me to remember a scene with her in it I would be hard pressed to recall anything (and I only listened to it a week ago). In Other Lives Charley is a fresh, vibrant character, exploding with excitement when she realises she can explore the Crystal Palace and enjoying some wonderful (and I do mean wonderful) scenes with the Duke of Wellington who warms to her almost as a father figure. I love how the filthy cow opens the story in a Jamie like fashion by enthusing ‘its enormous! Much bigger than I ever expected Doctor!’ and you wonder for five seconds if he has finally shown her his tackle. Victorian ladies don’t run apparently but Charley cannot resist and she wants to see every in the Crystal Palace at once! What dainty little feet she has! I love how she pretends that she was desperately concerned about C’rizz when she returns to the TARDIS when really she just wanted to change out of her petticoats. She’s a traveller but not a gypsy you know. I loved the sequences where Charley explains her situation to Mr Dimplesqueeze, losing her friends and with no where to go for the night because you can see he thinks this is all some kind of dirty role play! Charley’s reaction to Mr Dimplesqueeze’s suggestion that she pay for the food he bought her with a night of nookie is hysterical and she slaps him when he says she looks like a harlot! Described as a slovenly bedraggled creature after she has spent the night on the streets. She’s petite if you don’t mind…and not fat! She took riding lessons when she was younger, well one. She has a natural authority. An uncommonly educated young woman, Charley steps into the shoes of Madame de la Roche with consummate ease. Charley knows better than to lie to the Duke of Wellington and once he realises that she is from the future she tells him everything in some very tender moments.

Chameleonic Rogue: Completing what we in the trade call a miracle (that is the eighth Doctor, Charley and C’rizz all being written with some care and attention) even C’rizz is given some great moments. The Victorians aren’t quite ready for him. After falling into the company of Jacob Crackles, Esq. C’rizz is chained up, forced to strip naked (‘what sort of Utermizen do you take me for?’) and wear nothing but a thong to cover his modesty! Whilst you might think that this is going to turn into something kinky the truth of the matter is that people would spend good money to come and see him (for their ‘education, enlightenment and edification’ of course!). Naturally C’rizz finds this whole ordeal humiliating and can’t believe his midget friend is willing to be treated like an animal. Kerizzo is Crackles’ latest in his parade of oddities! Considering his actions in The Next Life and Terror Firma when C’rizz says he will kill Crackles you believe him. He tries to appeal to the humanity of the Victorian crowd (fat chance) and is whipped for his efforts. He just wants to be plain old C’rizz again (why?). He does a terrible French accent but a fine cockney. His friends in his head (you know L’da, Gemma and all those he has killed) tell him to save Crackles but he fights that urge and breaks his legs and takes away his sight instead. I’m not sure where this is all going with C’rizz but lets hope his murderous actions come to light soon.

Standout Performance: Ron Moody plays a fantastically naughty Duke of Wellington who frequently chuckles with eyebrow raising perversity. He and India Fisher have dazzling chemistry and I wished he could hop in the TARDIS at the end instead of C’rizz (and he admits if he was a few years younger he would!). The Duke realising that Charley is from the future and asking her to tell him about the future of his country is a truly great scene. Special mention has to go to Fisher and Westmaas for their embarrassing cod French accents (‘Poolice Pooblic Call Box!’).

Sparkling Dialogue: ‘I told the Duke of Wellington to hold me shoe!’
‘You’re thinking that I’m a tart! A harlot! A strumpet! A street walker!’
‘Met him once you know, very briefly. Little chap. Just before he set sail for Trafalgar. Have you seen the bloody monumental column in Trafalgar Square? Horatio’s taller than the rest of us now!’
‘Give me a battlefield for the House of Commons any day!’
‘Doesn’t the Crystal Palace look magnificent from this distance? Like a million polished diamonds glittering in the sunlight. A magnificent example of Victorian engineering concealing a thousand others.’
‘I can’t face my public wearing a dodgy hair piece!’

Great Ideas: Crystal Palace was big enough to display many of the products of industry and thousands of people but was only open to the public for six months. The Doctor kidnaps the French aristocrats to save them from execution. They are easy targets for an assassin’s bullet because they are supporters of Napoleon. The TARDIS dematerialises without the Doctor. Charley is shoehorned into the role of the French ambassador with in a dodgy wig! Charley tells the Duke the 20th Century has learnt little from its past. Edwards Uncle did not approve of his marriage to Georgina and they live in his house on sufferance. The Doctor has to pretend to be Edward to convince Rufus Dimplesqueeze (a Dickensian character name if ever I heard one!) she and the kids can stay. There’s a wonderful happy ending when Edward really does come to Georgina and you wouldn’t wish anything else for such a nice character.

Audio Landscape: Lots of atmospherics in this story, more exceptional direction from Gary Russell who really has raised his game in his run up to his departure from Big Finish. Fountain bubbling, fairground music, crackling fire, ticking clock, crows, walking on gravel, a perturbed crowd, splashing C’rizz’s face with water, whipped with chains, a horse and cart, that same football crowd that turns up in all time and space (they were there cheering all the way through Medicinal Purposes and The Game as well!), C’rizz chained up, moving straw, a clapping and jeering crowd, Charley on the streets with dogs, cats and people screaming, a marching band, C’rizz tearing his wig off, rustling newspaper.

Standout Scene: There’s a very funny Rocky Horror ‘Janet/Dr Scott/Janet/Brad!’ sequences when the Doctor, Charley and C’rizz met up again. Why can’t they be this fun all the time?

Result: I have given up trying to guess what the eighth Doctor adventures will serve up next. Since we have left the Divergent Universe we have gone from psychological thriller to eco blandness and now a cheeky Dickensian drama! Despite my complaints about the regulars since Faith Stealer there has only been (for me) one duffer and the stories themselves have been pretty consistent and entertaining. Other Lives ditches its plot (does it even have one) in favour of character and gives each of the regulars a great new relationship, be it with desperate wife Georgina, mischievous old rogue Wellington or the twisted and exploitative Crackles. So whilst nothing of consequence really happens the story displays local colour in abundance and the dialogue is frequently amusing. Frankly it is wonderful to have the Doctor, Charley and C’rizz let their hair down for a bit (well maybe not C’rizz who is chained up and humiliated) and the relaxed pace really leaves them open for some fine development. Extra points for the scene where Charley is mistaken for a hooker: 8/10 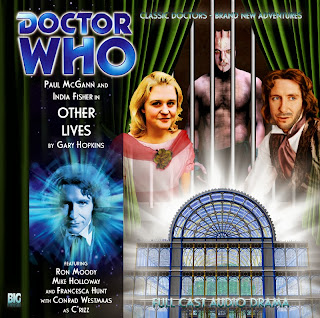 listening to this now and enjoying it thoroughly except for C'Rizz...he's SO BLOODY ANNOYING AND WHINY