The Vengeance of Morbius written and directed by Nicholas Briggs 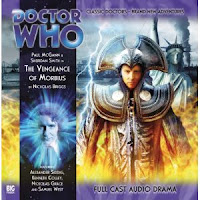 What’s it about: The richest man in the galaxy has just bought a backwards planet with no obvious mineral wealth in the outer reaches of the universe. An obscure mystical sect has been revived after centuries of neglect. A new race of aliens are hunting for prey. Why? As the Doctor and Lucie attempt to discover the answer, it becomes clear that someone is attempting to resurrect the past - and they need a Time Lord to help them achieve it.

Breathless Romantic: He talks of other times, other places suggesting to Lucie that he has had a long a fruitful life before he met her. The Doctor decides to stuff dignity and goes ape shit in his prison cell – a level of anger he rarely boils to. It is one of those rare occasions that he feels warrants crossing his own time line. Morbius takes one look at him declares he is still playing the fools. The Doctor takes the piss out of Morbius with his usual aplomb, barely looking up as he tries to threaten them and saying ‘Sorry we were doing a jigsaw…’ Suggests Morbius isn’t quite all there and that Zarodnax has surrounded him with ‘yes’ men. His death at the end of this story sees him plummet over a cliff, Sherlock Holmes style and this occasion is part of the vital time event that made the repairing of time possible. Always inspiring loyalty, he was a good man. If they really cared the Time Lords could bring him back.

Luscious Lucie: I loved the interview extra on this story that sees Sheridan Smith talking so enthusiastically about performing in these Big Finish plays. I loved her reaction to hearing the description of Charley: ‘Posh totty…and then the northern scum comes in!’ Like a new listener, Lucie is confused by all the continuity thrown at her in the first scene (Morbius, Solon, Karn, etc). As ever her levels of diplomacy are razor sharp, Lucie screams ‘lets us out of here you scraggy weirdoes!’ at the Sisterhood! If she has to die Lucie is glad it is with the one man she cares about the most – wow see how far they have come since Blood of the Daleks! She wants the Doctor to hug her when they are about to die. ‘You are your killing!’ Lucie says to Herspira, pointing out her flaws, ‘ease up will you?’ The Doctor advises that she give herself a wide berth as they cross their own timelines, it’s the advice he gives anyone who could possibly meet her! Lucie suggests that she might have been born in a service station in Blackpool. She is sarcastic when she is out of sorts and tells Time Lords ‘come on Buly, close down your transacorooonies!’ She seems almost gleeful at the thought of breaking a few laws of time: ‘We go right back to before all this happens and nobble Zarodnax!’ She made quite an impression on Rostro and he uses her name as a strength. She says her true timeline is with the Doctor and she bursts into tears when he plummets to his death. The Time Lords offer to wipe her mind to make the pain go away (‘Don’t you bleedin’ dare!’). The Doctor was her mate and he saved the universe, they had the time of their lives and did great stuff together. She will never forget him.

Great Ideas: Zarodnax drove the Sisterhood from Karn, bombarding them from space and tearing the planet apart. He wanted to mine the planet for industrial purposes when secretly he was looking for a remnant of the brain of Morbius. He has a Morbius fixation, has bought every artefact and is dangerously obsessed. Haspira infiltrated the cult and discovered Zarodnax’s plan to revive the villainous despot. The Sisters sent the brain of Morbius to its death and now Zarodnax is looking for a Time Lord to inhabit Morbius’ consciousness. When the Sisterhood warned the Time Lords of what was coming they recalled all TARDISes and quarantined Gallifrey, the Time Scoop capturing all Time Lords out on missions. Locating a fragment of Morbius’ brain and mixing it up with Straxus’ DNA, essentials of the dictator are in the fragment. Primitive interplanetary missile bounce from the Time Lord transduction barriers. Morbius drains the Eye of Harmony of energy and leaves the Time Lords without time travel and rips the heart of the Doctor’s TARDIS. Morbius is forced to continually feed from Straxus when he gets weary. Whole star systems have surrendered to the might of Morbius’ fleet. If they can get the Stellar Manipulator back the Time Lords can go back and stop Morbius. He brought back the statue of Liberty from the Earth after crushing them. The Doctor and Morbius both fall to their deaths.

Isn’t it Odd: What is up with the fluting, camp Zarodnax? What a pointless, ill conceived, strangely acted villain, nowhere near the style and psychosis of Solon. There is so much slow build up to Morbius’ return which doesn’t happen until halfway through this episode – his resurrection should have been the cliffhanger to the last episode leaving enough to time to properly explore his threatening nature and army building and conquering. Instead the story has to skip forward ten years as soon as he is revived to a point where we are exposed to his weaknesses straight away and thus he never feels like a threat. Certainly not the all conquering, Time Lord hiding, universal destruction threat that everybody is talk about. We never get to hear any action so it’s very hard to connect with this risk. The Headhunter holding a gun on Lucie at the end of the story is another moment of false tension designed to ensnare people to come back next time, it feels pretty cheap, not springing from this story but just a random moment at the end of the story.

Standout Scene: I really enjoyed the Dispersal Chamber scenes, which sees the Doctor and Lucie panicking at their impending deaths and then the Doctor all smug that he has managed to get them out of it, then realise that they are still in danger…and then just at the moment they think it is all over it was all a bluff!

Result: Lacking the imagination, confidence and style of The Brain of Morbius, Vengeance is a flat rehash of classic elements that adds nothing new to the mix and this two part season finale proves to be the first real misstep of the range. Two thirds of the story is all build up leaving the last 20 minutes to deal with Morbius’ resurrection and since we never get to see any of his devastation it feels like this is one villain who is all talk and trading on his reputation. In shocking contrast with the season 13 classic all of the characters are dull and unengaging from the returning Time Lord Straxus, to the Sisterhood and right the way through to Zarodnax and Morbius himself. The best moments belong to the regulars, Lucie in particular, but they cannot hold up this camp bit of old nonsense on their own. Even Nick Briggs’ direction lacks its usual panache. A damp squib of a finale at the end of an inconsistent year: 4/10

Buy it from Big Finish here: http://www.bigfinish.com/28-Doctor-Who-Vengeance-of-Morbius
Posted by Doc Oho at 01:07

I really the scope of this two-parter, but I'll concede that Part One is better. Here are my thoughts in my review of 2009.