Sisters of the Flame written and directed by Nicholas Briggs 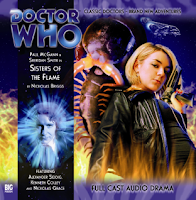 What’s it about: The richest man in the galaxy has just bought a backwards planet with no obvious mineral wealth in the outer reaches of the universe. An obscure mystical sect has been revived after centuries of neglect. A new race of aliens are hunting for prey. Why? As the Doctor and Lucie attempt to discover the answer, it becomes clear that someone is attempting to resurrect the past - and they need a Time Lord to help them achieve it.

Breathless Romantic: This is the Big Finish equivalent of those Doctorless tales like Love & Monsters and Blink where he is written out of the action, but it is more like Turn Left because it gives Sheridan Smith the chance to own an episode of her own. The Doctor knows his TARDIS console and he knows when he is dead. He wonders if the Time Lords want him to return home why don’t they just ask? He considers failure as one of the basic freedoms.

Luscious Lucie: Poor Lucie gets so many bruises falling about in the TARDIS. She is ripped apart from the Doctor and we get to see how good she is on her own two feet. Lucie doesn’t have any documentation and gives an incredible amount of lip to her jailer (‘you great big garden bug!’). We finally get to see how much the Doctor means to Lucie but now she thinks he is dead, she misses him and she cannot bear the thought of never seeing him again. Straxus had almost forgotten what a thoroughly unpleasant girl she is! Lesser species aren’t allowed on Gallifrey so Straxus wont taking her with him. She and the Doctor were having a really good, fun time, she liked being with him, it was dangerous and she moaned. Lucie keeps saying was as if it really is all over. I really like that Lucie apologises for her blatant racism and finds Rosto’s calm acceptance of it very generous. Lucie and Rosto make a pretty good team and she is quite the most fascinating humanoid he has ever met. Lucie asks the Time Lords about their pretentious way of gobbling up the Doctor in time scoops: ‘Ever thought of just using the phone?’ She’s so excited to see the Doctor at the conclusion and hugs him to death!

Great Ideas: The TARDIS is eaten up by a time scoop and are spat out of the vortex into a space freighter. Rosto is a Trell, a ten-foot centipede police officer from a peaceful and ordered race. Straxus visits Lucie in her cell. The survival of the Time Lords and the whole of space-time are at stake! Haspira is one of the Sisterhood of Karn trying to kidnap Lucie. The Sisterhood departed Karn years ago. Zarodnax is the leader of the cult of Morbius and he has bought Karn…what could he be up to?

Isn't it Odd: The Doctor mentions that a stellar manipulator can shut off the Eye of Harmony in the very first scene…something that would only be mentioned if it were relevant in this story. And bugger me that is exactly what happens in the next episode! I don’t understand why they keep bringing back Katerina Olsson in various roles, it wasn’t so bad in The Zygon Who Fell to Earth when her voice was modulated but here she just sounds like the Headhunter doing an old woman voice – it was so obviously her I was expecting a cliffhanging moment when the leader of the Sisterhood was revealed to be…the Headhunter. Alas that moment never came. As far as I can see the point of this episode was to introduce the Sisterhood and reveal that Zarodnax is the leader of Morbius’ cult and yet both things were done in a little under ten minutes in The Brain of Morbius. The cliffhanger is utterly underwhelming, considering how many other things could be done shoving the Doctor and Lucie into the Dispersal Chamber is probably the falsest moment of tension they could have chosen.

Result: Far too quiet and eventless for its own good, Sisters of the Flame does not feel like the prelude to an exciting season finale. There is all this talk of the direst of consequences and yet all we see here is the usual kidnap/escape/capture routine on an even smaller scale than usual. Lots of Lucie is always a good thing and Sheridan Smith’s performance is as rewarding as ever but rather than using her character to drive the plot there is no plot so most of the story is Lucie sitting in various prisons grunting at her captors. My favourite aspect of the story was Alexander Siddig’s Rostro, a genuinely appealing character who is great here but wasted in the finale: 5/10

Buy it from Big Finish here: http://www.bigfinish.com/27-Doctor-Who-Sisters-of-the-Flame
Posted by Doc Oho at 23:54

i loved this one you know why SO MUCH LUCIE!!!1 this is a lucie tour de force. this is as far as i have gotten with EDA and lucie is a very serious contender for the very best companion ever. this gal is in sarah jane territory. and this audio gives the listener plenty of luscious lucie

Well, since Lucie is the only companion I really don't like so far, you can imagine how I was feeling while I was listening to these two stories. Too much Lucie Miller to my taste.

I have the opposite feelings, I love Lucie and can't have enough of her.After the insufferably smug Charley, who I can't stand, Lucie was a breeze of fresh air and a constant source of fun. I miss her terribly