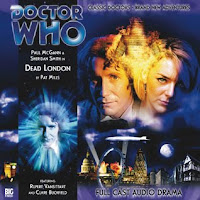 What’s it about: Someone's playing with us. Manipulating time and space for their own ends. The TARDIS lands in London. But which one? The Doctor and Lucie find themselves trapped in a maze of interlocking Londons from Roman times to the present day. But they are not alone in this labyrinth: a killer is on their trail.

Breathless Romantic: The eighth Doctor has had such an interesting time of it on audio, don’t you think? Besides rehabilitating the sixth Doctor, bringing Paul McGann back to the role after his blink and you’ll miss it TV Movie was Gary Russell’s greatest gift to Doctor Who. Whilst BBC Books had taken the eighth Doctor into interesting new directions, their interpretation moved the character as far away from the giddy, excitable puppy we saw in San Francisco as possible, amnesiac, violent and unpredictable. What we wanted was to actually see (but hearing would do) McGann in further adventures so we could evaluate him as an actor in the role. To see how he would have fared if a series had been commissioned. Pretty well by all accounts. Paul McGann is a fantastic actor and throughout the first two seasons of audio adventures we saw him hit the heights of Storm Warning, The Stones of Venice, Chimes of Midnight and Neverland amongst others. This eighth Doctor was enthusiastic, clever, thoughtful, funny and very likable and his relationship with Charley Pollard evolved beautifully with some surprisingly emotional moments. Then something went wrong. We should always applaud writers for trying to take characters in a new direction but when it is fudged as spectacularly as it was when the eighth Doctor stuck his fingers up at our universe and slouched off to the Divergent Universe you have to wonder why Gary Russell wanted to take everything that was working with the character and turn him so unlikable. He became insular, rude, grumpy, moody and pretty dull – it was a real slap in the face to those of us who were following the series eagerly to have a Doctor who didn’t seem to give a ¤¤¤¤ anymore. The biggest problem was the character didn’t go on a journey during his time in the Divergent Universe, he’s ill-tempered and bland, learns nothing about himself, fails to make up with Charley, picks up vanilla companion C’rizz who he can barely muster any enthusiasm about and then gets slapped back into our universe. With those two seasons of non development over with there were a handful of fun adventures back in our universe but the sparkle had gone – his relationship with Charley had hit its peak during Neverland and he doesn’t batter an eyelid when C’rizz dies. The eighth Doctor had had his day, it appeared. So hurrah for Nick Briggs and Alan Barnes (who we can now forgive for Zagreus) who decided to rip the eighth Doctor from the main range and give him his own series of shorter, juicer 50 minutes episodes mirroring the success of the new series and a dazzling new companion in the shape of Lucie Miller. Oddly Charley went off to have adventures with the sixth Doctor and worked an absolute treat with him so both characters were reinvigorated by a thoughtful new direction. Gone was the mood swings and overplayed melodrama, this spanking new eighth Doctor was witty, energetic, occasionally violent and enjoyed his relationship with Lucie Miller. Paul McGann and Sheridan Smith are the northerners in space and share dazzling chemistry and their first season was book ended with a fantastic Dalek and Cyberman story. Things are looking bright for number eight…

The Doctor has a habit of leaving the TARDIS unparked when Lucie gets the shopping bug and gets sentenced to death for a parking offence! How embarrassing if that had been his end! He’s been called many things in his life but never a dishonest beggar! His imaginary ravings would give Don Quixote a run for his money. ‘Shut up, yer fop!’ the crowd screams at him! Sophie has known a few violators in her time but none as handsome as the Doctor. I his life he has much to apologise for. He admits that he has committed heinous crimes against fashion but in his defence he pleads for the regrettable tastes of his previous incarnations. Considers himself an ambassador for human cattle! Enjoying himself? Check. Defeating monsters? Check. Catching the eyes of pretty ladies? Check. All is right with the world at the moment. He appropriates a new companion for this story, the delicious Clare Buckfield (Sally-Ann from The One Doctor) as Springheel Sally and once he meets up with Lucie again the three of them work very well together!

Luscious Lucie: Unfortunately things are quite as spunky for Lucie who is separated for the Doctor for most of the adventure and whilst he gets to do all the fun bits she is left pondering the purpose of a river. Smith is marvellous, of course but Dead London lacks that bit of Lucie charm that boosts the best stories. She thinks Southerners are rude (she’s right, we are) and is attacked by the sinister Ripper-esque slasher The Blackout Killer! Lucie is confident enough to pretend to be pissed (frankly she’s so convincing I fear she is channelling experience) and Sheridan Smith might be the only actress to be able to get away with saying ‘Gerrof!’ in all seriousness! Love you Lucie but lets see more of you next time!

Great Ideas: The Doctor shifts from a modern day court case to the dock of the Old Bailey in the 17th Century in the blink of an eye. Springheel Sophie is the finest funambulist in London Town! The Blackout Killer is a fellow of frightful appearance who’s been in the habit of attacking respectable females in the neighbourhood of Newgate, taking advantage of the blackouts to take his victims. Time zones have been shoved side by side in a very War Games fashion. The Sepulchre is bringing people of no consequece to their re-enactment chambers, bringing to life the more colouful episodes of human history to feed off. The river connects all the difference time zones. The Doctor, Lucie and Sally find themselves inside the Wicker Man and about to be burnt alive as a Celtic sacrifice! The Sepulchure’s brain is like a TARDIS, bigger on the inside and they have landed inside.

Audio Landscape: Laughter in court, a horse and cart, tram, air raid siren, screaming and mad cackling in the cells, bombs exploding in the street, a suddenly appearing bubbling river, the tapping cane of the Blackout Killer, smashing through crates, burning wicker, rafting, jumping and landing from a great height.

Musical Cues: Unmemorable if I’m honest and pretty basic for the most part. There wasn’t one moment when the music struck me as especially atmospheric.

Result: The imaginative concept of slipping through London in various time zones just about works thanks to some colourful scenes in the first half but the mystery that shrouds the story is answered far too quickly and solution feels effortless. Unfortunately this ranges strongest aspect, the Doctor/Lucie relationship is neglected and they are kept apart for most of its running time which isn’t so bad for the former but leaves the latter unmemorable which is unthinkable. What could have been a afar meatier story is skipped through in record time leaving little time for exploration of the various glimpses at history and fun set pieces aside it is pretty disposable. Entertaining but too brisk: 6/10

Buy it from Big Finish here: http://www.bigfinish.com/21-Doctor-Who-Dead-London
Posted by Doc Oho at 18:59

I think I enjoyed this a bit more than you did, but I really enjoyed your intro. It perfectly sums up how invigorating it is to listen to this range after finishing number 8's turn in the monthly range. Several of the stories have been less than meaty, but McGann and Smith are always a joy to listen to.