The Beast of Orlok written and directed by Barnaby Edwards 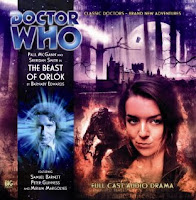 What’s it about: With fangs like splinters, claws like knives, the Beast of Orlok gobbles lives. With brimstone breath and eyes aglow, he'll eat your soul - to Hell you'll go! Germany, 1827. The town of Orlok is under a curse, haunted by the memory of a spate of grisly murders that shattered the community twenty years before. At the time, townsfolk blamed the legendary Beast of Orlok, a nightmarish creature from medieval folklore. And now, it seems, the Beast has returned. As the killings begin again, the people of Orlok are understandably suspicious of two strangers newly arrived in their midst. The Doctor and Lucie must face their darkest fears as they find themselves plunged into a decidedly grim fairytale…

Breathless Romantic: I love it when Barnaby Edwards writes for the Doctor because you know he is going to have a wealth of fascinating facts at his fingertips, be superbly researched on the period and sum up his whereabouts, Sherlock Holmes style, with the visual and auditory evidence on display. In The Beast of Orlok he really doesn’t disappoint. You can’t just stick an L-Plate on the TARDIS and go for a quick spin, they take centuries to master! Is the eighth Doctor the only Doctor who could get away with the line: ‘we could of used that 200 quid to bribe that jailer!’ – actually no that would sound quite comfortable in Eccleston’s mouth as well! What a muddy oaf he is! What could have possibly have given him away as a Time Lord? The Baron lists his clothes, the way he talks, his general air of smugness and self-satisfaction – that and the sonic screwdriver. There’s a gorgeous scene towards the end of the story where the Doctor is full of no’s and Lucie full of ifs and buts and he remembers why he enjoys travelling with her so much. He’s made 900 years but he would have liked to make the millennium.

Luscious Lucie: What if the Doctor was on the Titanic with a mincing blonde and Lucie was on the iceberg with the TARDIS and a bunch of penguins? She loves thinking up awkward questions, doesn’t she? Even Lucie’s stomach is not strong enough to handle corpse ripped apart. Lucie is slightly confused when she chats up a fellow who is studying Ars Philosophica! No doubt she thinks it s a bit kinky. She makes an admirable attempt at ingeniousness which isn’t convincing…despite the fact she is being sincere! Lucie expects Omen style music when the devil eyeballs her.

Standout Performance: Another trait of a Barnaby Edwards story is its immaculate casting. Sometimes actors come into Doctor Who and just get it. They don’t need to work on chemistry with the actors, they don’t sound baffled at all the technobabble and they feel as if they have always been there. Samuel Barnett is one such actor who slips into the role of Hans effortlessly, has fantastic chemistry with Sheridan Smith and frankly works so well I wouldn’t have minded him popping into the TARDIS with them at the end. Peter Guinness really chilled me when he started whipping the Doctor! Miriam Margoyles makes me whoop with joy with anything that she appears in, hers is such a distinctive voice and she always acts with such gusto!

Great Ideas: Fourteen unexplained deaths, fourteen dismembered bodies accredited to the Beast of Orlok, limbs and heads missing. Born of pestilence, harbinger or plague, harvester of souls! The Mystic traveller, palmist to nine royal families and three Popes! A secret laboratory in the cellars that even has a bubbling tar pit (much to the Doctor’s delight!). ‘I would have expected more…from a Time Lord!’ says the Baron to the shock of the audience. He’s General Zoff of the Rabzao Planetary League, some military alliance no doubt but cause the Rabzao System is always at war, each planet trying to trounce its rivals. The Alliance always breaks down when one of the parties develops a new weapon and they are all at each other’s throats again. Greta and Hans are the biological units created by Judah and sent to Earth for their own safety. Twenty moons ago a star fell in the forest and inside were two star children, a boy and a girl. Baron Teufel was the Beast of Orlok and Frau Todd blinded him, rescuing the children. Golems are an artificial life form outlawed by article 12 of the Galactic Code; they are the best soldiers in the universe, obeying without question, never giving up and virtually indestructible. Greta and Hans are a new race of Golems, even more deadly.

Audio Landscape: Another thing you can be sure of with a Barnaby Edwards directed story is that the sound engineer (in this case the impressive Howard Carter) will bring the story to life with atmospheric fervour. Horse and cart, whinnying, the ravenous, snarling growl of the beast splintering through the wood of the cart, twittering birds and crawing crows, gunshots setting off a scattering of birds, a falling tree, polite laughter and applause, crackling fire, bubbling cauldron, pouring bathing water, bubbling tar, chaining the Doctor up, Lucie down the plughole, a meteor crashing into the Earth, gurgling babies, the Golem submerged in mud, cracking up like clay in a kiln, owls hooting.

Standout Scene: Who would have thought that the Doctor’s heartbeat detecting switch was for real?

Notes: ‘It looks like you were ahead of Mary Shelley by about ten years, baron’ says the Doctor – pre-empting his future allegiance with the woman after he finishes his run with Lucie.

Result: Witty, macabre and literate, Barnaby Edwards writes a beautiful fairytale in the Doctor Who mould. A bewitching cast tackle the intelligent script with some skill and the resulting piece is very entertaining to listen to. This might be the shortest review I have ever written because I really don’t have a great to criticise or discuss – the script isn’t the most thoughtful but its a jolly good romp that washes over you with excitement, atmosphere and a big wallop of fun. Well written, well directed and well performed, a little gothic gem: 8/10
Posted by Doc Oho at 09:49

A wonderful story, full of all of Doctor Who's best tropes - it's funny, scary, dripping with atmosphere, full of little twists and surprises. The 8th Doctor and Lucie are an exceptional team. It's witty and literate, with a good dose of the macabre. One of the best audios I've listened to.

A terrific and thorough review, too.

cmiiw, Eighth Doctor's adventure with Mary Shelley happened *before* he meet Lucie, even before he meet Charley actually.