Deimos written by Jonathan Morris and directed by Barnaby Edwards 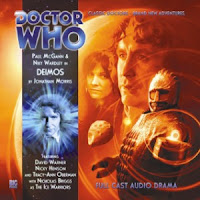 What’s it about: Millions of years ago, the noble Ice Warriors fled to Deimos, moon of Mars, hoping to sit out the radioactive death throes of their home planet. When the TARDIS lands on Deimos, the Doctor discovers that the Warriors' ancient catacombs are now a popular stop for space tourists. But the Martian dynasties are more than history, and the Warriors are far from extinct. It's not for nothing that 'Deimos' is the ancient word for 'dread'…

Breathless Romantic: ‘I’m the Doctor, this is Tamsin and you’re about to be invaded by Martians…’ He loves testing out the moon buggy to reach the shuttle – he thinks they’re rather fun! You friendly crisis counsellor! For once the Doctor gets in way over his head, he marches into the shuttle all smugness and light and the Ice Lord murders him when his allies back at the museum tell the Ice Warriors he is worth nothing to them dead or alive so it isn’t worth taking him as a hostage. Tamsin is asking the Doctor to be a killer, to murder the Ice Warriors to save everybody on Mars.

Tasty Tamsin: To Tamsin the Ice Warriors are two legged man-sized turtle (‘Clampy pincers! Nasty!’) and she is surprised to learn that they had their day before her time. Loved her little gag with the Doctor pretending she has travelled in time before when she has just read the plaque in the museum. She once worked at the London Dungeon as a cockney drab who got done in by Jack the Ripper! Poor Tamsin gets in a right tizzy trying to make up stories of their trespass when the simple truth would do. I love Tamsin’s crazy ballet dancing to keep herself warm, she’s very funny at times. Refuses to be parcelled off like some kind of bimbo. Tamsin begs for Grenville’s life as the shuttle is about to launch knowing that he will be burnt alive in its blast and is astonished that the Doctor doesn’t even try to save him.

Standout Performance: I make it sound like something predictable but here we have another Barnaby Edwards directed story and another stellar cast assembled. You cannot mistake David Warner’s rich plumy voice, ideal for audio. He’s played an alternative Doctor, the deliciously dark and mysterious Steel and a host of other characters. Long may they continue to use him as a classical actor such as David Warner brings a great deal of gravitas to his stories. Tracy-Ann Oberman makes a good impression as well, miles away from her performance as Yvonne Hartman in the TV series. Nick Briggs deserves some kudos playing the Ice Warriors – he played a character with his natural voice in a story I listened to earlier today and his voice is suitably altered and authentic as the Ice Lord.

Sparkling Dialogue: ‘Move any closer and you’re baked Alaska!’
‘It was the Professor with the spanner in the Power Room!’
‘Which part of the word warrior didn’t you understand?’

Great Ideas: The atmosphere could no longer protect the Ice Warriors from the suns rays, the surface temperature rose and if they were to survive they had to evacuate Mars. They created great catacombs on the moon Deimos until Mars or Earth became suitable for inhabitation. The Martian terraforming process was brought to a premature end due to the advent of the great recession – a series of artifical suns would have been launched into orbit but it never got off the drawing board because it caused the great recession in the first place! Professor Schooner is the leading authority on the Ice Warriors and curator of the museum on the Moonbase. The ice Warriors want to use the atmospheric re-ioniser to make Mars habitable for them again. There are some more Ice Warriors dormant in the asteroid belt that will wake in a few centuries and go on to find a new home world. Professor Schooner is a poor deluded fool – he has spent his whole like studying Martians and now he has a chance to come face to face with them a literally study the past – but one seconds consideration for the creatures will mean the annihilation of everybody on the Earth. Imagine the subjects of your expertise waking up and telling you that your entire study of their culture is full of errors? He feels that the Ice Warriors have betrayed him by not being the honourable race he thought them to be. Grenville played explosives in the Moonbases fission chamber to destroy the Ice Warriors but the Doctor refuses to let them, even though there are 300,000 people who are in danger.

Audio Landscape: The story opens on a ridiculously dramatic scene between a pair of Ice Warriors discussing the evacuation of Mars and I thought the director has gone slightly mad until you realised it was a tourist amateur dramatics re-enactment! Hissing Ice Warriors, sonic blaster, the airlock opening, there are some real fireworks as the Ice Warriors take on the Earth Forces, the shuttle taking off.

Musical Cues: Howard Carter’s music is so exciting and bombastic you can feel testosterone vibrating across the sound waves!

Standout Scene: The cliffhanger really whets the appetite for The Ressurection of Mars, revealing the Doctor’s impossible dilemma and featuring the return of your favourite and mine…Lucie Miller!

Notes: I remember being pretty nonplussed by the trailer for this story as it sounded far too melodramatic and silly so take comfort in the fact that 90% of the trailer actually takes place in the pre-titles sequence!

Isn’t it Odd: I always find it a little tricky when a story is split into two like this ala the New Series because I always have trouble deciding whether to consider them two separate stories or to think of them as a whole. When they have different titles I am guessing it should be the former but when the story is purely built up in the first part and all the rewards come in the second half it leaves the scene setting story as the more forgettable of the two. Is this my way of saying Deimos disappoints whereas The Ressurection of Mars sparkles – kind of but only because so much is left hanging in this story.

Result: Dramatic and pacy but really just a scene setter for the second half, Deimos takes a little too long to get to its cliffhanging dilemma considering the Ice Warriors wake up in the pre titles sequence. The hostage scenario is played for real and there are plenty of opportunities for the Doctor and Tamsin to shine but again you feel that all the really juicy stuff is coming up. Strong direction and terrific performances hold this story together although the Ice Warriors feel less of a threat in themselves and more of a threat in the morally impossible circumstances they have trapped the Doctor in. But you just know all the juicy stuff is coming in the second half…: 7/10
Posted by Doc Oho at 03:53