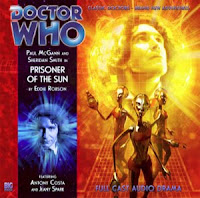 What’s it about: Six years after being captured by the galaxy-spanning organisation known only as The Consensus, the Doctor lives inside a hi-tech complex at the heart of an unstable sun, condemned to an eternity maintaining its systems. A moment's carelessness could cause the star to collapse – and the deaths of billions. Watched over by liquid guards, the Mercurials, the Doctor's only company at the heart of the sun is his assistant 'Daphne' – the latest in a line of android helpers. But rebel eyes have their eyes on the sun, and its lonely controller – and are prepared to risk even a galactic cataclysm to secure the Doctor's release…

Breathless Romantic: It’s fascinating to see that Eddie Robson has contrived the only prison that the Doctor would willingly bar himself into – a prisoner of his own morality. He has been trapped in the sun complex for nearly six years trying to save the lives of six billion people. The Doctor programmes his android assistant with Lucie’s voice, which says rather more about his character than he would probably care to admit. He programmes his assistant to be loyal, eager, earnest and to have a sense of humour – his perfect companion? His told the Consensus that he would like his companions to be fitted with an appetite and an ability to eat and he would like to be able to share a meal. The Doctor landed and helped out the rebel movement and expected to be out of here in a few weeks but the Consensus realised that his technical skill would come in handy for their sun project. He only has access to his living quarters, his workspace and the guard quarters – it’s a wonder he hasn’t gone stark staring mad! From all the stories its easy to guess that he is insufferably arrogant, he is a man of legend, people still talk about him years after he has gone (or been hidden away in this case). The Doctor has been able to run rings around the Mercurials for some time but he’s never needed to before. He’s useful as a tool for propaganda, telling stories about his bravery inspires people to join the rebellion and having him return and not live up to his reputation would spoil things. Maybe he can live up to his expectations after all, considering the amount of time he has sacrificed to this project. What a clever sod the Doctor is, staging Chloe trying to kill him so she could escape because he had suspicions that this was a fake all along. Her job was to find out what was going on and report back to him. Because he programmed her himself he knows that she would never have come back armed with a weapon to murder the Mercurials so somebody else would have had to have got to her.

Standout Performance: Given all of her affecting developments this year it makes for a pleasant change to have Sheridan Smith in such a completely unpretentious role.

Sparkling Dialogue: ‘This isn’t a prison of walls. It’s a prison of responsibility.’
‘They know how dangerous you are and that the only cell that can hold you is one that you will make for yourself.’
‘One death is more than enough to have on your conscience. So why not take on all those deaths on myself, save anybody else from having to take them on.’

Great Ideas: There’s a brilliant bluff at the heart of this story that questions whether the Doctor has actually been doing any good for the last six years or if it has all be an elaborate hoax to keep him as a prisoner of his own morality because the Consensus will need him again someday. Could you trust two billion lives to the word of one person? Any story that opens on what appears to be Lucie Miller trying to murder the Doctor has to be doing something right! The complex the Doctor is trapped in is in the heart of a volatile sun. This part of space used to be very feudal, claims over planets went on for decades, millions of lives lost for no good reason and then some brave people on one planet said no more and set up the Consensus and gradually put a stop to all the wars. Now they are paranoid about losing control and going back to the old ways and they tried to make the sun into the ultimate weapon that would deter people from trying to topple their Empire. Two inhabited planets, two billion people and the collapse of the sun would kill them all. Mercurials often hire out their services to do thing people cannot or don’t want to do. The shields are down and if there is another surge from the sun both planets will be consumed and the tracking station will be the first for the chop! The Consensus activates the auto destruct – just a voice trying to get the Doctor to leave. Chloe returns with a report that the whole scenario has bee a sham. The rebellion has driven the Consensus back and this system is their last outpost and Hagon was there to slaughter everybody on those two planets and end hostilities cleanly. The rebels didn’t even know of his plans, it was just going to be an accident.

Standout Scene: The Doctor letting the auto destruct countdown to zero. What if he was wrong?

Notes: The silver reflected Mercurials look fantastic on the cover – I wish wee could see them on the move on the TV as I could imagine you could have some very nimble, slick action sequences with them. The Doctor gets a distress call from the real Lucie, asking for help and saying the human race is in real trouble.

Result: A very different take on the Doctor helping the rebels scenario with the Doctor working as part of the system and the rebels coming to rescue him and topple the oppression! The second half of the story gets blissfully complicated, everybody trying to convince the Doctor that he has to leave via various means but he comes up trumps seeing through all the deceptions but even I have to admit that for a moment I was convinced, which provided some real tension. It might feel a little lightweight compared to the fireworks elsewhere in the season buy this is a clever little piece, well written and well performed. In any other season this would stand taller but because the standard is so high here: 7/10
Posted by Doc Oho at 04:58