The Scapegoat written by Pat Mills and directed by Nicholas Briggs 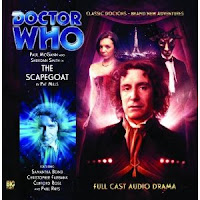 What’s it about: Willkommen, bienvenue, welcome to the Theatre des Baroque! Oh, but if you think you’ve seen and heard all that Paris by night has to offer... the exotic sights of Le Moulin Rouge, perhaps, or the horror tricks of Le Grand Guignol... if you think nothing could cause your mouth to dry and your heart to pound... you're wrong. Ladies and gentlemen, Mesdames et messieurs – not forgetting our honoured guests from the Gestapo – tonight, it is my privilege to present to you the star of the Theatre des Baroque! A man who has died on stage near ten thousand times! The Most Assassinated Man in the World… Max Paul! And joining him, in a playlet we call 'The Executioner's Son' – from Blackpool, England: the enchanting Lucie Miller! Ah, la belle Lucie. She's got no idea what she's let herself in for. Heh. Should you feel faint, or nauseous – never fear. Tonight, we have a Doctor in the house! Just pray he lasts ’til the interval…

Breathless Romantic: The Doctor states that humans will never amount to anything until they learn to control their primitive urges but I seem to remember a long haired Time Lord fop not a million miles away getting all tongue tied not long after he regenerated! On the run from the Nazi’s, the Doctor purchases a ticket for the theatre! At one point the Doctor starts baaing like a sheep! Name, the Doctor, rank, Prydonian renegade! The Doctor addresses the audience and proves to be a fine theatrical reader. The black sheep of the Time Lords, the one who never fitted in and driven out into time and space by his peers, the Doctor is one scapegoat who managed to change the destiny of his people. A glorious translation of the story’s theme. A lot of time under the bridge has flown under the bridge since then. He sometimes thinks back to his time on Orbis. There is a lot of darkness out there but he goes to the pinpricks of light (new worlds) when it threatens to overwhelm him.

Luscious Lucie: How many more ways can I say I love Lucie Miller? Its not just Sheridan Smith’s clear love for the material in the documentary extras (although her enthusiasm shines through on every single release) but the character has gone from a slightly wooden, obstinate character in her very first story to a delightfully whimsical and real Northern companion who compliments Paul McGann’s eighth Doctor beautifully. When the scripts are sparkling such as this one you literally cannot beat Smith’s delightfully funny performances. The opening scene is positively delightful with a delightfully deadpan faux French Lucie Miller gets ready for a visit to the Moulin Rouge! How can Ewan McGregor seduce her when the TARDIS is 15,000 feet in the air above Paris? She wanted the Duke de Pomme Frites and the Doctor gives her Nazi Occupied Paris! You’ve got to love Lucie’s logic – when the TARDIS becomes a fairground ride she figures that if you can’t get in you might as well get on. Unfortunately it starts spinning madly and cue scenes of Lucie screaming ‘Doctor, I’m gonna be sick! I’m gonna hurl!’ She almost faints with delight when Ewan bleedin’ McGregor walks into her dressing room and then she remembers life isn’t that grand (‘Oh no! I’m piggin’ dreaming, aren’t I?’). She doesn’t mind if he wants to have a little go at loosening her corsets, may as well have some fun whilst before she wakes up! Lucie Miller from Blackpool, that’s going to go down a treat with the SS! She is beyond wooden on the stage until she starts acting like herself and then she has the audience roaring! When she catches up with Max Paul after scaring the shit out of her she gives him a belter around the face. ‘Thank you David Dickenson!’ she cries as she is tied to the rack and is given a historical lecture about it. When she runs on the stage to save Max one of the audience cries out ‘its ‘er! The scrubber from last night!’ She is so glad to have found the Doctor again.

Standout Performance: How weird that I listened to the whole of Wirrn Dawn before I recognised Daniel Anthony’s dulcet tones and yet during her first line I caught Samantha Bond’s unmistakable voice! If you are going to be casting a villainous role there is none finer, her silky voice and ability to cut through the comedy and still have some threat and credibility is second to none. Scapegoat is succulently cast, a story that demands heightened performances and as ever with Doctor Who those are the ones which make the most impact. Paul Rhys really tugs at your heartstrings as the scapegoat especially when he admits that he never stops being a victim because it is who he is meant to be.

Sparkling Dialogue: ‘Zut Alors!’ – you can always count on Lucie to get to heart of the problem!
‘Lets go shock the pants of the humans!’
‘More to the point tell us how you stuck ‘is head back on after we saw them chop it off!’
‘Herman Goring then!’ ‘Who’s well known for his Northern English accent?’ – Lucie is attempting to rescue the Doctor but unfortunately hasn’t really thought through her disguise!
‘In every family, in every school, in every workplace there’s always someone being picked on’ – such a great idea, rather than simply accepting that there is always somebody who is treated unfairly they revel in it, glorify it.
‘No one notices demons walking the streets with the Nazi’s around.’
‘Oh my God, there’s more!’

Great Ideas: They have landed in Nazi occupied France, hardly the dazzling musical themed Paris that Lucie was hoping for! The TARDIS chameleon circuit engages and turns into a fairground carousel – a quantagram, like a hologram but it has a physical presence. Max Paul, the idol of every girl in Paris and Lucie’s partner on the stage. Every night they have a physician in attendance should it prove too much for the faint hearted. Lucie’s scream mirrors our horror as she realises that Max has genuinely been guillotined in front of the audience! How wonderfully sick! Max Paul is the most assassinated man in the world; in past performances he has been cut into pieces, crushed, shot by a firing squad, stabbed and burnt! He is scarred with the marks of ten thousand assassinations. Mother Baroque dragged the TARDIS to Earth, hid the ship from the Doctor and stole his best friend. What an awesome concept – Mother Baroque has a small device in her frontal lobe that turns anything she doesn’t want to hear into meaningless babble – I would love to have one of these for when my husband starts telling me what a lazy arse I am! A Quantic Reanimator heals injuries by turning back time around the affected area, reverting Max’s head to a time when it was still attached to his neck but it leaves a ghost of an injury that occurred. Oh gross – that means every single time Max is kill it actually happens! Uggghhh! What a job! The Reanimator is breaking down and soon they are going to need a new Scapegoat to die on the stage. There are two types of people in the world; people who do things and people who have things down for them, hunters and prey. When the hunting season takes the Baroque’s they become wild and cannibalistic and so they siphoned their bloodlust into ritualised form and each clan nominated a scapegoat to whom they project their bloodlust. The scapegoat would stop them from tearing themselves apart. A catastrophe befell their planet and one clan came to Nazi occupied France. The Theatre of Terror is their way of keeping their old skills alive and paying the bills! A great giggle as the Nazi’s are made a fool of (‘this is a secret aircraft! It is not a Morris column!’).

Audio Landscape: A coughing TARDIS, stage bell, the sonic screwdriver goes topsy-turvy, gunfire, the audience in the theatre, the safety curtain, the audience howling, growling army truck, squeaky guillotine pushed on the stage, the blade screams through the air and lops Max’s head off, Max’s transformation is horrific, marching Gestapo boots, firing a machine gun in the theatre, goats baaing.

Musical Cues: A wonderful French accordion opening, fun and frothy. The TARDIS becomes a carousel complete with a wonderfully jaunty theme. Robertson gets to have some great fun with an organ soundtrack as Lucie’s first night performance kicks off. Violins and piano stir up a touching farewell between Lucie and Max (‘Oh please! Any number of mutilations and eviscerations I can take…but this?’).

Isn’t it Odd: For all of you out there who cannot handle sentient goats remember this is a show that gave us sentient cats (New Earth), sentient dogs (the Killorans), sentient cows (The Lunar Strangers), sentient lizards (Silurians and Sea Devils), sentient ants, woodlice and moths (Zarbi, Venom Grubs and Menoptera), sentient Spiders (Planet of Spiders), sentient turtles (Ice Warriors)…I could go on but I’d be here forever!

Standout Scene: There’s a wonderful sequence that shows you how far these audio adventures have come in realising action – the Doctor is running from the Nazi’s and bullets are screaming through the air and chipping at the cobbled streets accompanied by some exciting music – it’s the simplest of scenes on the page but transformed into a moment of delight on audio. I was laughing my head off at the beheading on stage until Lucie started screaming when my amusement turned to horror – I haven’t felt that twist of atmosphere from humour to horror since Jubilee.

Result: Gloriously twisted, full of ghoulish characters and laced with some piquant black humour, this is my favourite eighth Doctor adventure of the season thus far. The heady theatrical atmosphere brewed up by the dark script is right up my street and the story managed to shock me on several occasions which audio rarely achieves. This is exactly the atmosphere Pat Mills was attempting to create in Dead London but it fell way short of the mark but he has perfected his recipe (one part sick jokes, one part grotesque characters and one part musical theatre!) and The Scapegoat provides a blistering good time. Bullish Gestapo officers, goat people, theatre de macabre, Lucie Miller dazzling on the stage, Byronesque Baroques and repugnante theatrical assassinations, The Scapegoat is a brutal and delicious taste of gothic horror that once again proves the 8DAs are at their best when they dabble with the original: 9/10
Posted by Doc Oho at 01:13