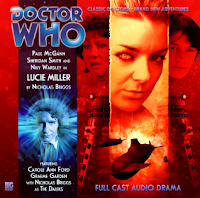 What’s it about: 'Hello! Doctor, it's me. Lucie. Lucie Miller…' Lucie Miller needs the Doctor's help. The whole planet Earth needs his help. But he is nowhere to be seen. While Lucie struggles to survive a terrible sickness, an even greater threat to the human race is about to be unleashed. And this will be the second Dalek invasion of Earth the Doctor's granddaughter has had to endure

Breathless Romantic: By raising the stakes so high and showing how badly the people of the Earth suffer it has never felt more important for the Doctor to show up and save the day. When Susan’s key starts glowing and you here the TARDIS dematerialising it is the most wonderful sound you have ever heard. The Doctor never lets go of you – Lucie thought he had died once and spent months mourning him but then they got back together. The Doctor is a sentimental old Time Lord and when Lucie left to go travelling with Alex he slipped the Interossiter into her luggage so that if at any point in her life she needed him she could call him – wow she must really mean a lot to him because I can only think of one other person he has given that ability to (the Brigadier). After all the Doctor always defeats the Daleks, doesn’t he? When he is marched into a Dalek cell he is really cheeky with them, the one spot of humour in this otherwise fatalistic episode (‘Isn’t it time you brought around the hot towels?’).

Luscious Lucie: Lucie falls sick with the Dalek plague when they were in Thailand. Her eyesight got worse and her legs were constantly painful. Because everybody was hurting she just had to cope because there was no aid. We have to endure scenes of poor Lucie screaming in pain with the illness, its horrible. Sheridan Smith genuinely sounds sick, as though she can barely talk and on the edge of tears. She wonders if her and the Doctor are stuck together, Lucie Miller and the Doctor because no matter how many times they part company they always seem to be drawn back together. Lucie understands that the Doctor must have been going through something pretty important not to answer her call. The sickness did its work on her after time, she couldn’t properly walk and she lost her sight completely in her right eye. She won’t have any of that pity the poor girl in the wheelchair lark, she’s just grateful to be alive. Once they were underground Lucie only kept going with the dream that the Doctor would turn up one day and defeat the Daleks. Who would have ever thought Lucie Miller would give up? Crippled and alone on a devastated planet, she wants to curl up and die. Lucie really does forgive the Doctor for all the secrets and lies surrounding her Aunty Pat and she really wants to come back to the TARDIS and travel with him.

Tasty Tamsin: When the Doctor and Tamsin meet again it is clear that there is no love lost between them, their dramatic split has had devastating consequences for their friendship. The Monk has really wrapped his veil of charm around Tamsin – she thinks they are rescuing the priceless artefacts of the world from destruction but the Monk never does anything that benevolent. She even thinks the Daleks are medical missionaries! Its one thing not getting on with him, not approving of him but its very different for sitting back and letting the Doctor die.

Meddlesome Monk: You’ll shake your head at the Monk breaking through the rebel communications and showing the Daleks where they are. You forget that through all that comedic bluster that actually he is only out for himself even though he does try and make there be as few killing as possible. He tells Tamsin when the Daleks get cross they get a little over zealous – undersell a situation much?

Simply Susan: Sometimes Susan can feel a tiny tingle of power in the TARDIS key as though the ship is racing towards her. Every time Susan wakes up from bad dreams about the Doctor dying she imagines she can feel the power of the TARDIS as she clutches the key so tightly.

Angelic Alex: Time Lord blood holds Alex back from the sickness. Alex and Lucie manage to get a boat back to England eventually when they found out he was the son of a member of government. He takes too many risks like his Grandfather. Turns out Alex is a right little general, rousing the rebels.

Standout Performance: This is the culmination of four years of incredible work as Lucie Miller by Sheridan Smith and it is fantastic that she should go out with such dramatic material that pushes the character and the actress to their limits. Smith is always sublime but beaten down to such extremes we have never quite cared for Lucie as much as we do here.

Sparkling Dialogue: ‘Who wants to listen to nasty rumours when you’re having a good time?’
‘But you never came…you left us to die.’
‘I don’t understand how this can be happening again. It’s exactly the same as before. They weakened the Earth with a plague. How can this happen? The Daleks! They’ve come back!’
‘Sometimes I think we were crazy. Like you have to be as insane as the Daleks to defeat them?’
‘We’ve killed him. We’ve killed the Doctor.’

Great Ideas: The opening sequence screams of the tragedies to come with Lucie sending a desperate message to the Doctor and the Daleks intercepting. Alex and Lucie were in Thailand when the sickness came, the plague that gripped the entire world. Nobody knew where the sickness had come from, only that it was everywhere. The hospitals are swamped, no transport, power failures – the Earth is on the verge of collapse. All the alien allies have left to ensure the disease isn’t spread further and the Earth is quarantined suspected to be stricken with an alien virus. There were a few pitch battles when the Daleks landed, well mass exterminations, hundreds of people running away screaming. The rebels plan to intercept Dalek communications using a submarine radio mast. The Daleks have dug up most of North America and are building a mineshaft to create a propulsion unit to drive the Earth. The rebels lost a lot of their men but over time they had small victories and were gripped by the fever that they could perhaps one day defeat the Daleks and reclaim their planet. Tamsin is helping the Monk preserve all of the famous art treasures, to prevent them being destroyed by the Daleks including the Mona Lisa and the Sistine Chapel.

Audio Landscape: Waves crashing, flies buzzing, Susan on the intercom, helicopter landing, an almighty explosion as an alien ship crash lands in England, the Daleks screaming over the radio waves at the rebels, dripping water underground, seagulls, climbing a ladder into a submarine, sonar, missiles launching and tearing into Dalek bases and blasting the shit out of them, a Dalek army getting very excited at the thought of exterminating some rebel scum, the Daleks tear through the rebels and murder indiscriminately, gunshots, Dalek heartbeat, submarine alarm, deep breaths as the Dalek ship is destroyed that is carrying the Doctor.

Musical Cues: As the Daleks realise the rebels are listening into their radio waves there is a dramatic heartbeat that leads into a stirring action score. Intoxicating and stimulating music as the rebels begin to fight back.

Isn’t it Odd: That for the first 20 minutes you don’t even notice that the Doctor hasn’t been present.

Notes: Naturally this has many similarities to the Dalek Invasion of Earth, the plague, the subjugation of the planet by Daleks, etc but with the benefit of hindsight and the ability to get up close and personal with the human race throughout the crisis I personally feel this story does a much better job of exploring the atrociousness of the situation. It is certainly far more uncomfortable to endure. Briggs brings home the crippling uselessness of being disabled by the virus and there is a sequence where the rebels try and attack the mineshaft that mirrors the attack on the saucer but the stakes feel so much more raised here. There’s no tame whipping of the slaves by the Robomen here, the Daleks don’t accept surrender and they cut the rebels to pieces with machine guns.

Result: Extremely uncomfortable to listen to but positively gripping at the same time, Lucie Miller takes us intimately closer to an invasion of Earth like never before and doesn’t shy away from any of the horrors. It’s practically a companion chronicle for Lucie Miller and whilst this would be captivating material regardless of the companion we care so much more about Lucie because of the journey we have taken with her. Sheridan Smith gives the performance of a lifetime allowing us closer to her character than ever before and the unjust pain that she experiences makes this distressing, anxiety producing material. Whilst he may not appreciate the comparison, the strength of the writing and the direction shows that Nick Briggs has truly upped his game since the Morbius two parter at the end of season two, this is blisteringly stirring material. The finale will have to be something very special to top this: 10/10
Posted by Doc Oho at 03:26